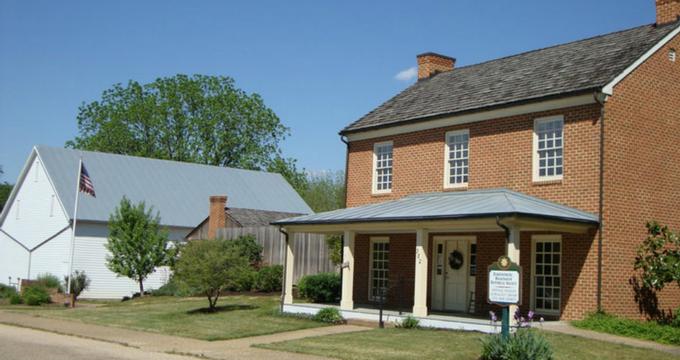 Located in Dayton, Virginia, the Heritage Museum showcases the collections of the Harrisonburg-Rockingham Historical Society, featuring permanent and rotating exhibits related to the region’s cultural history and a genealogy research library. The Harrisonburg-Rockingham Historical Society was originally organized in 1897 by a group of local historians wishing to preserve the social and cultural history of the Central Shenandoah Valley.

Formal collections preservation was not begun until 1933, when the Society was reinstituted and formalized and a museum facility was opened within Harrisonburg’s Main Street Elementary School. In 1978, the museum moved to a facility on the city’s South Main Street which now houses the Quilt Museum, and in 1988, it was relocated to nearby Dayton within the historic Cromer-Trumbo House. A new museum complex was constructed in 1993 following a major fundraising campaign, and a major expansion to the complex was completed in 1999 with funding from the Margaret Grattan Weaver Foundation, bringing the museum’s space up to 7,000 square feet. In 2009, the nearby White House and its surrounding land were donated to the museum by community donors Twig and Lorraine Strickler. As of 2018, an endowment fund for future expansions and renovations has been established by the Society.

Today, the Heritage Museum is owned and operated by the Harrisonburg-Rockingham Historical Society, offering a variety of permanent, rotating, and living history exhibits showcasing the social and cultural history of the Central Shenandoah Valley region. The museum complex doubles as the official Historic Dayton Welcome Center, offering walking tour guides, maps, and brochures for regional attractions. The complex is open Mondays through Saturdays, with seasonal Sunday afternoon hours and variable hours on major national holidays, and offers admission rates for adults and seniors, with children and students admitted free.

The museum’s 14,000-square-foot complex is constructed to mimic a 19th-century American farmstead, with a number of museum exhibit areas constructed below ground level to minimize visual impact within the community. Several major artifacts on the campus’ grounds are operated as living history museum exhibits, including the Cromer-Trumbo House, which is open to the public for guided tours. The home, which is located adjacent to the main museum building, consists of a rear log section constructed in 1811 and a front brick section constructed in 1840. The German-style home was purchased by the Trumbo family in 1889 and gifted to the Historical Society as a living history exhibit by Sarah Cromer. Within the home, the Mary Spitzer Etter Collection showcases Victorian-era household items and decorative arts. Docent-led tours of the home are offered on the last Saturday of every month between April and August, along with special tour times offered as part of public special events. Private groups may also reserve tour times throughout the year by special appointment.

A number of exhibits are showcased within the museum’s main complex, including the permanent On the Homefront exhibit, which commemorates the area’s participation in World Wars I and II. The area’s participation in the 116th Infantry Stonewall’s Bridage is chronicled, along with the story of a German prisoner of war who was held during the war at a Rockingham County internment camp. A number of temporary rotating exhibits are also displayed, focusing on a variety of social and cultural topics. Past exhibits include The Burning of the Breadbasket, which recounted the 1864 Civil War destruction of local crops and livestock at the hands of the Union Army, and Civil War Letters, which showcased an archive of historical letters and documents from the mid-19th century.Within the Frame also focused on repeated patterns within 18th, 19th, and 20th century social life in the region, and several exhibits, including Colorful and Cozy: The Woven Art of the Coverlet, Morrison Art, and Valley Fraktur focused on the works of local and regional artists.

The museum’s Genealogy Library serves as a community resource, open to students and researchers by appointment. A bookstore also sells titles related to exhibits and local history, and a gift store offers items from local artisans and bakers, including one-of-a-kind jewelry, chocolates, and popcorn. Multimedia items may also be purchased on the museum’s online gift store.

The Heritage Museum offers a variety of regular public special event programming, including a Third Thursday Talk series focusing on topics related to local civic, natural, and social history. Past lecture topics have focused on the creation of Shenandoah National Park and topics related to World War I and the American Civil War. A number of Third Thursday programs are also presented with community partners such as the Massanutten Regional Library in Harrisonburg.

25 Best Things to Do in Richmond, VA

21 Best Things to Do in Charlottesville, Virginia