4 Best Things to Do in Natural Bridge, VA 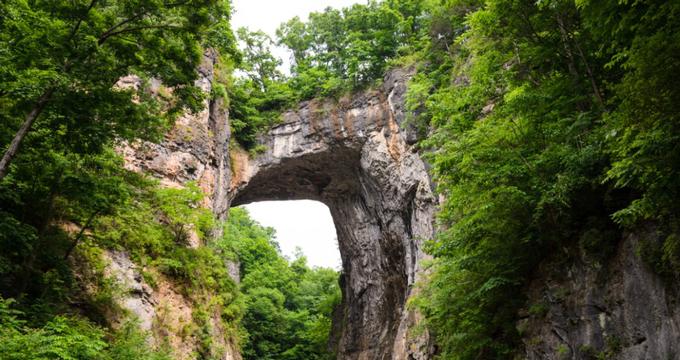 Natural Bridge is a small community in Rockbridge County, Virginia, best known as the site of Natural Bridge, a natural arch which gives the town its name, as well as Natural Bridge Caverns, carved deep into the rock by the water through millennia. Near the Natural Bridge is Vine Forrest, a Federal Style brick historic mansion built in 1806. Natural Bridge Zoo is a private zoo engaged in breeding program of endangered wild animals. Dinosaur Kingdom II is a quirky tourist attraction with figures of dinosaurs fighting Union soldiers during the Civil War. CDC information for travelers. Hours/availability may have changed. 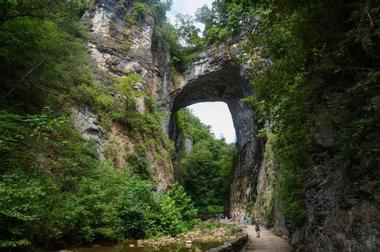 Natural Bridge near the town of the same name in Virginia is the 215-foot tall natural limestone bridge over a gorge carved out by Cedar Creek. The park that surrounds this natural wonder is a mix of a beautiful forest and rolling meadows among the area’s rough karst terrain. The views of surrounding mountains and the James River valley are breathtaking. The park has over six miles of hiking trails, including the Cedar Creek Trail that runs from the bridge to the Monacan Indian Village and the 30-foot high Lace Falls with its magnificent cascade. The park rangers offer Living History programs that connect visitors to the past and show how people once lived in the area and used its resources for survival. The Visitor offers fascinating exhibits and a gift shop. The area was once owned by Thomas Jefferson and is listed on the National Register of Historic Places. 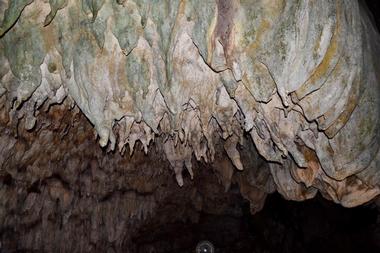 The Natural Bridge Caverns are part of the same limestone geological features that produced Natural Bridge of Virginia. The caverns were discovered at the turn of the 20th century and opened to the tourists in 1977. The tour of the caverns descends over 34 stories deep into the Earth, where the caverns offer the magnificent natural display. There are many special features and structures carved in the limestone rock. One of the most fascinating is the Colossal Dome room, an enormous dome-shaped room created thousands of years ago. From the Dome Room, the path takes visitors to other features such as the Mirror Lake, the Well Room and the stalactites and stalagmites in the Canyon Room. The tour takes about 45 minutes. 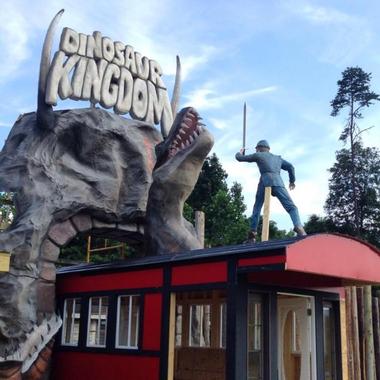 Dinosaur Kingdom II, also known as the Escape From Dinosaur Kingdom, is a quirky, unique tourist attraction in the town of Natural Bridge, Virginia. It is far from the popular dinosaur parks kids and their parents flock to. It consists of statues of dinosaurs attacking the soldiers of the Union Army. There are thirty fiberglass dinosaur statues, a number of figures of Union soldiers, and several other characters, such as the statue of Abraham Lincoln and of a gorilla in a cowboy hat. Dinosaur Kingdom, which opened in 2005, is the work of local artist Mark Cline. The story that the artist created is of the dinosaurs that were discovered in Virginia in 1863; and that the Union Army attempted to use them as weapons, but the dinosaurs turned on them. Cline’s inspiration for the bizarre park comes from his visit to the Dinosaur Land park in White Post, Virginia as a young boy, and from the movie The Valley of Gwangi, in which cowboys discovered living dinosaurs in a Mexican valley.

You are reading "4 Best Things to Do in Natural Bridge, VA" Back to Top 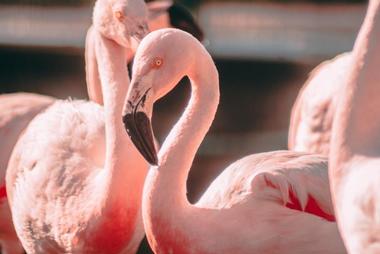 The Natural Bridge Zoo Park is a privately owned zoo in Natural Bridge, Virginia, that opened its doors to the public in 1972 and has been expanding ever since. The main purpose of the Natural Bridge Zoo is the breeding and raising of threatened and endangered species. The park also offers students and the general public the hands-on opportunity to learn about the animals, birds, and reptiles that humans share the earth with. For many children, the zoo is an unique opportunity to have real contact with wild living things. No television programs can compare with standing next to a massive giraffe, feeding a llama, touching a baby dromedary camel, or standing eye to eye next to a huge white tiger. Some of the animals that the zoo successfully raised are Reticulated Giraffe, Bongo, Sitatunga, Beisa Oryx, Kudu, Blesbok, Scarlet Macaw, Blue and Gold Macaw, Ring-tailed Lemur, Himalayan Bears, Grant Zebra, Dromedary Camels, Capuchin Monkeys, and many others.


4 Best Things to Do in Natural Bridge, VA

You are reading "4 Best Things to Do in Natural Bridge, VA " Back to Top

15 Best Things to Do in Harrisonburg, Virginia