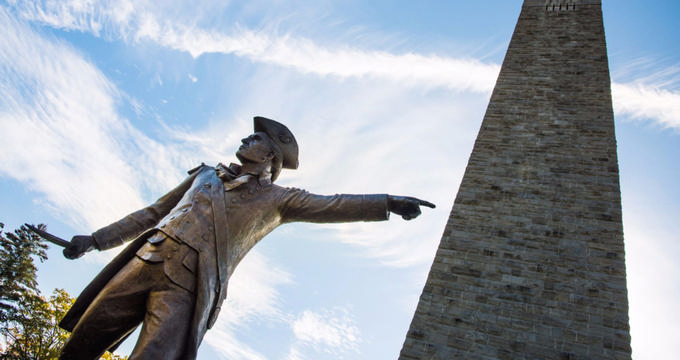 Situated near the corner of New York, Massachusetts, and Vermont, Bennington is a small town that is great as both a stop-off point and as a destination in and of itself. There are many different restaurants in Bennington that feature local fare, some of which are housed in buildings over a century old. Bennington is also the home of the Bennington Battle Monument, which is a must see for any Revolutionary War enthusiasts who are traveling through. Bennington’s rich history extends to the very buildings themselves, as it is also a great place to see some of the classic architecture that was so popular in this region of the country in the late 1800s and early 1900s. 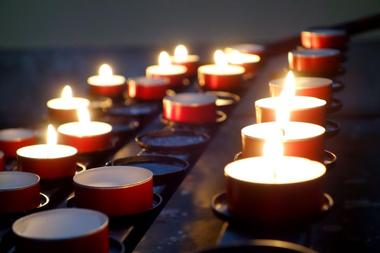 The Old First Congregational Church of Bennington was founded in 1805 and was the first Protestant church in the entire state of Vermont. Before the present church it was common for community members to gather in a meeting house that was in its place, and these meetings can be traced back to 1762. Today, the modern-day church is open during various hours for guests during the year. September through June, the church opens at 11 in the morning, and between July and August it opens a bit earlier at 10 in the morning. Throughout the entire year guests can attend Sunday service if they wish to do so.

-- You are reading "12 Best Things to Do in Bennington, Vermont" Back to Top 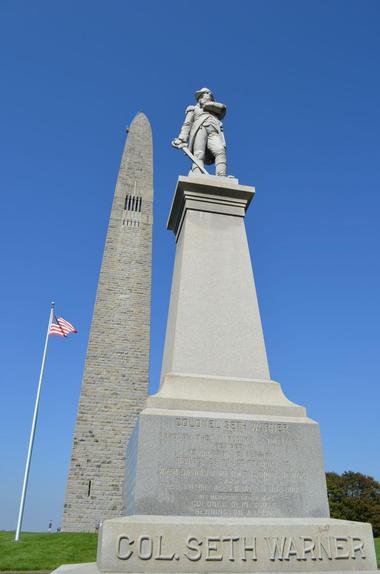 With views of three different states, including New York and Massachusetts, the Bennington Battle Monument was erected in 1889 and stands an impressive 306 feet tall. At the top of the tower is the observation deck from which guests can see for many miles and read about the battles that took place in the area. The location of the actual monument is important because it stands on the exact location that was a strategic objective of the Bennington Battle. The monument is closed during the colder months, but guests can access the monument May through October.

-- You are reading "12 Best Things to Do in Bennington, Vermont" Back to Top

With both ever rotating exhibits as well as events, the Bennington Museum exists to showcase the creativity of 18th century Bennington and surrounding regions. The museum is filled with many different artifacts, paintings, and stonewares for guests to explore and observe. Included as a permanent collection exhibits is the largest public assortment of American folk artists Anna Mary Robertson “Grandma” Moses. The museum offers free admission for any guests who are under the age of 17, and is open for most of the year excluding major holidays. For information on specific exhibits and collections, contact the museum directly.

, OH -- You are reading "12 Best Things to Do in Bennington, Vermont" Back to Top 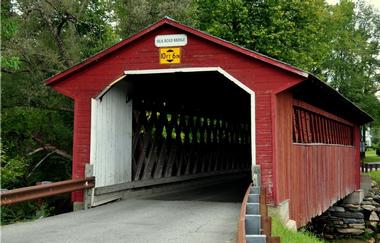 The Silk Covered Bridge was originally built by Benjamin Sears around 1840. Sears, who was from a family of bridge builders in the region, constructed the Silk Covered Bridge out of wood using the truss method. The bridge is a single lane road and connects downtown Bennington with North Bennington where the Silk Road crosses the Walloomsac River. This covered bridge was damaged in 2011 when forceful flood waters caused by Hurricane Irene swept down the river; it has since been repaired and reopened. In addition to this bridge, the Sears family also built other bridges in the region and their work is often on the National Register of Historic Places.

-- You are reading "Fun Things to Do in Bennington, Vermont this Weekend with Friends" Back to Top


The Burt Henry Covered Bridge is thought to have been originally built in the 1830s and has since been added to the National Register of Historic Places. The bridge is a single-span town lattice truss structure, and it spans the Walloomsac River with a total length of over 120 feet. The bridge is only 18.5 feet wide, which limits this bridge to single lane traffic. The sides of the Burt Henry Covered Bridge are covered with novelty siding, of which the vertical boards shelter the trusses under the roof.

-- You are reading "What to Do in Bennington, Vermont this Weekend" Back to Top


This theater has produced over 300 shows in the nearly 50 years since it first opened, and because it has always been aware of its role as a New England theater it has continued to thrive thanks to enthusiastic local support. The Oldcastle Theatre Company is filled with a professional company of actors, directors, designers, and writers who all work in sync to produce the specific theatrical style that this theater has become popular for. The theater was originally formed by five New York actors back in 1972, and the reason that this troupe ended up in Vermont was because one of the core members was born and raised in Bennington.

-- You are reading "Top Romantic Tourist Attractions in Bennington, Vermont" Back to Top 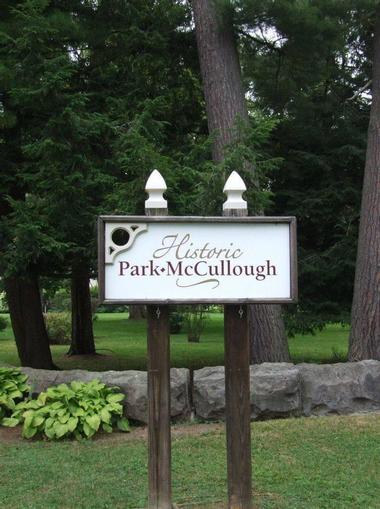 Considered by many locals to be one of the most exquisite, significant, and overall best preserved Victorian style mansions in all of New England, the Park-McCullough Historic House was originally built in 1864 in Bennington. This historic house is a well preserved example of a country house built in the popular Second Empire Style with influences from the Romantic Revival style which was also popular at the time. It was designed by Henry Dudley, of the Diaper and Dudley New York architect firm. The total property that the house sits on is over nine acres, and tours of the grounds as well as the house are available by appointment.

-- You are reading "What is There to Do with Kids in Bennington, Vermont" Back to Top

The Paper Mill Village Bridge is more commonly known by locals as either the Paper Mill Bridge of even sometimes the Bennington Falls Covered Bridge. This bridge is a wooden bridge that is covered by a roof and carries the local Murphy Road over the Walloomsac River. The bridge was once reinforced by doubling up the trusses and adding additional floor beams with the intentions of allowing heavy trucks to pass, but after preliminary testing it was deemed unsafe for trucks. The Paper Mill Village Bridge is the longest covered bridge in the entirety of Bennington County.

When it was originally founded in 1932 the Bennington College was a private liberal arts college that was for women only. The school was designed to explore new approaches concerning higher education, with specific emphasis on self-guided and hands-on learning. In 1969 the college became co-educational, and with the introduction of men the programs and classes were slightly expanded. Bennington College is spread among its 440 acre grounds, which have a combination of both rural and urban features. Guests are welcome to tour the grounds at their leisure, and many of the buildings contain informational plaques that tell visitors about the history of the school.

, Michigan beaches -- "Best Things to Do in Bennington, Vermont for Locals & Tourists - Restaurants, Hotels" Back to Top 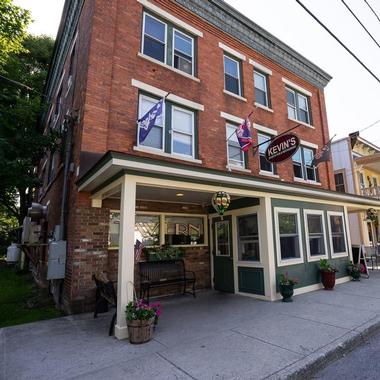 In a town as small as Bennington it is no surprise that there are local bars and establishments with rich local history. The brick building that Kevin’s Sports Pub and Restaurant reside in were originally built in 1903, and it was first in the 1920s that the restaurant side of the operation first opened up. Kevin’s Sports Pub and Restaurant was originally part restaurant and part meat market, but it has since become fully a restaurant thanks to local support. This pub carries many of the American classics and also features some local and regional favorites that guests may like to try when travelling through Bennington.

In the style of old European public houses, Publyk House in Bennington has worked hard to turn themselves into a community staple not only for good food, but also for good company. The Publyk House has been open to the public for over 40 years and resides in a restored three story barn. This restaurant focuses on servicing fine foods, many of which are local favorites, as well as high quality and local spirits. The ambiance is designed to be welcoming and warm, and the general atmosphere of the building makes it easy to strike up conversation with strangers. There is a brick hearth to keep guests warm in the winter, and full windows that help keep guests cool in the summer.

-- "New cool stuff to do in Bennington, Vermont" Back to Top or Romantic Getaways

After opening in 1961 the Jensen’s Family Restaurant quickly became a community root beer focused drive-in staple in Bennington. Originally the restaurant served root beer for five cents, or ten cents if guests wanted a frosted mug from which to drink it. The prices may have changed over the years, but the recipes remain the same, which is what keeps locals coming back for more. The main foods are hot dogs, hamburgers, chili dogs, chicken, and french fries, and there is car hop service available between the months of April and October. The restaurant has an outdoor patio that guests can use in the summer and a greenhouse seating area that is pleasant even during the cold winter months. 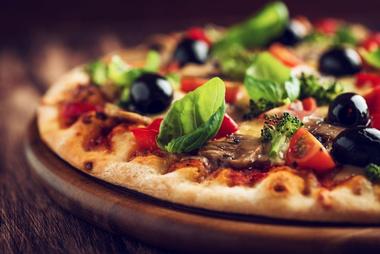 Benner’s Pizza was founded by local Bennington citizens after living in the picturesque town for over 35 years. This pizzeria is located in an old, white clapboard style colonial building that was erected in 1816. The building has of course been updated, but the owners of Bennington have taken great care to ensure the history of the building was preserved. The building still has its original covered front porch, on which guests can eat pizza when the weather is pleasant. Benner’s Pizza is family owned and operated, and focuses on pizza, calzones, soups, sandwiches, salads, chicken wings, and more.

You are reading "12 Best Things to Do in Bennington, Vermont " Back to Top

8 Best Things to Do in Chester, VT

12 Best Things to Do in Montpelier, Vermont

25 Most Beautiful Mountains of Vermont

20 Best Things to Do in Burlington, Vermont