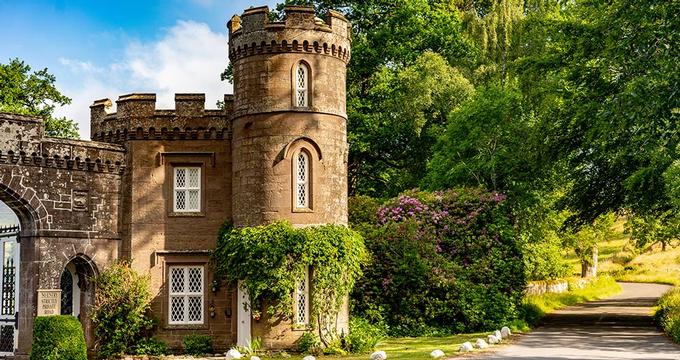 Perfect for travelers looking for beautiful nature, warm Scottish hospitality and plenty to do in the area, Monzie Estate is a historical getaway that offers a stylish five-bedroom bed & breakfast, and four romantic self-catering guest cottages across the property. The estate is also home to Monzie Castle, a castellated mansion designed in an L-plan which was built in 1634, and redesigned by Sir Robert Lorimer in 1908. Check availability & pricing 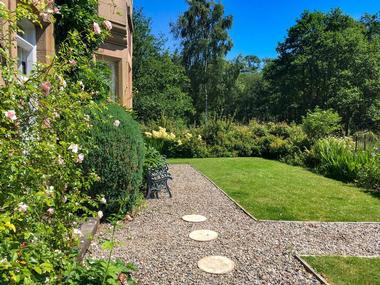 Monzie Estate offers a choice of accommodations in the form of fully equipped, self-catering guest cottages, along with a stunning bed and breakfast that offers five en-suite bedrooms and a gourmet continental breakfast every morning. Surrounded by pristine natural landscapes, scenic woodland parks, 1,600 sheep, and located just a few miles from the charming town of Crieff, Monzie Estate is perfect for couples and families alike.

Mill House is a new, beautifully appointed bed & breakfast with five bedrooms. Guest rooms feature wooden flooring and contemporary décor with king-size beds in deluxe linens, and en-suite bathrooms with soaking tubs, showers, thick towels and toiletries. Each room is individually decorated with stylish headboards, a desk and other custom touches. A delicious gourmet breakfast is served every morning in the sunny dining room. Mill House can also be rented for company retreats, workshops and family reunions. The downstairs breakfast and lounge area is a stylish and comfortable place for chatting with other guests.

Set in an in a remote setting above the estate, Brae Cottage is a newly built cabin for two guests with spectacular views of the surrounding countryside. The cottage features a comfortably furnished bedroom with plush bedding, an en-suite bathroom a soaking tub and shower, thick towels, and deluxe toiletries, and a cozy living room with a log burner and plenty of books, DVDs, and a selection of favorite games. A fully equipped walnut kitchen is ideal for self-catering and dining in, and the cottage features beautiful Monzie joinery with beautiful handmade doors and windows.

Surrounded by breathtaking scenery on Monzie Estate, Glowry Cottage offers a real escape from the hustle and bustle of the city. The four-bedroom cottage is comfortably furnished with a king-size bed in the master bedroom and twin beds in the three other bedrooms, all of which are dressed in high-quality linens. En-suite and private bathrooms have soaking tubs and showers, thick towels, and organic toiletries, and a cozy living room offers a selection of books, DVDs, and a variety of board games. A fully equipped walnut kitchen is ideal for self-catering and dining with beautiful views of the Scottish countryside. 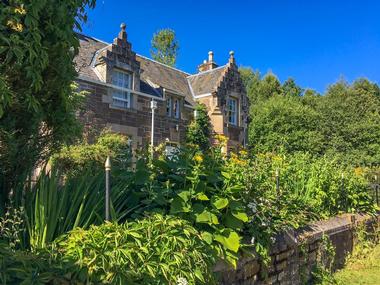 Located at the end of Monzie Castle Gardens, Gardener's cottage is a tranquil escape two miles down a private road that offers extra levels of privacy and seclusion. Lovingly restored to its former glory, the cottage features exquisite handmade Monzie joinery with handcrafted cupboards and furniture, including a beautiful boot room bench and boot rack. The living room has two large two seater sofas and a plush armchair, an open fire with a basket of logs, and modern amenities such as WiFi, a television and DVD player with a DVD library. A large fully equipped kitchen has everything needed for a self-catering break, including a range cooker with two ovens. The master bedroom offers a king-size bed dressed in plush linens, and an en-suite bathroom with fluffy bathrobes and thick towels. The second bedroom has a double-to-twin bed with luxurious linens and a private bathroom with a shower halfway down the stairs. The aptly named Garden Cottage has a beautifully manicured garden with a garden bench where guests can relax and soak up the scenery. 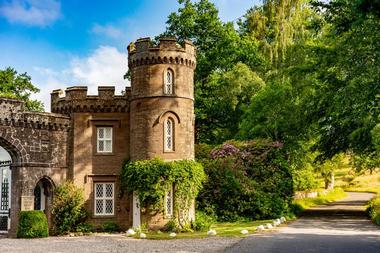 The East Gatehouse Lodge features a turreted stairway and octagonal rooms and can cater for up to four guests with two bedrooms, and two full bathrooms with a shower and an original cast iron tub from the Monzie Castle. The lodge features a fully-equipped kitchen with Monzie Joinery and modern amenities such as a microwave, refrigerator, and dishwasher, a dual oven, and a combo washer-dryer, and a full dining room. A spacious living room has comfy furniture and an open fireplace and is full of natural light from large windows that boast beautiful views. 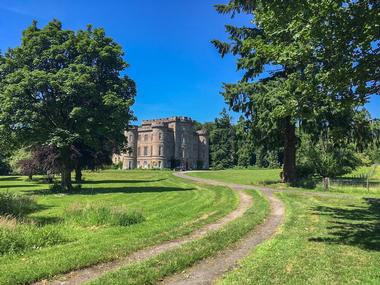 Monzie Estate boasts a rich history and heritage that reflects the ancient culture of Scotland. In the 17th century, the little village of Monzie (which translates to ‘field of corn’ in Gaelic) had a population of 200 people, boasted two schools and five pubs, and was renowned for its weaving industry. Monzie Castle was built in 1634 by James Graham, who was later killed in the Civil War, after which the castle was taken over by the Campbell family, kinsmen of the Breadalbane Clan, who built the Taymouth Castle a few miles away in the next valley.

Captain Alexander Campbell of Monzie commissioned architect John Patterson, previously clerk of works to the celebrated Robert Adam, to build onto the castle in 1975 with the intention of making it one of the largest houses in the region. When it was completed, the castle was said to have dwarfed all other buildings and the valley and to have contained vast collections of armor and stuffed birds.

In 1856, Monzie Castle was purchased by ancestors of the previous owners and let to the Crichton family, the most notable member of whom was Sir William Crichton, who was Lord Chancellor of Scotland between 1434 and 1454.

In 1908, the castle was destroyed by a severe fire leaving only the outside walls remaining and the leading Scottish architect of the day, Sir Robert Lorimer was tasked to restore the castle. Scottish architect Sir Robert Stodart Lorimer was famous for his sensitive restorations of castles and historic houses, as well as his promotion of the Arts and Crafts movement. His affinity with Edinburgh craftsmen and workshops is reflected in his works, which is on display as part of a harmonious piece of design.

Today, the older parts of the castle are almost entirely unaltered externally, with the date 1634 carved into stone over a doorway of the wing and the arms of the Campbell and Graham families carved on the date stone. The interiors boast an impressive fireplace, also dating back to 1634, which features a massive lintel inscribed with swags and a coat of arms, and garderobes built into the thickness of the walls in the west wing.

The more recently built sections of the castle built by architect John Patterson, are three stories high with a four-story center block and 34 corner towers with rich plasterwork, carved paneling, and a pair of marble fireplaces on the inside.

Castle tours are offered during certain weeks in June, by appointment.

5.Things to Do Near Monzie Estate 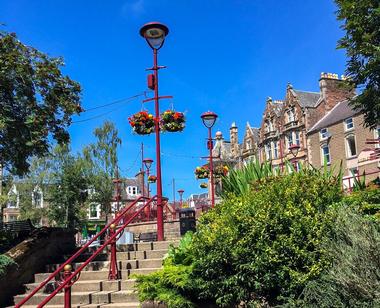 Monzie Estate is located a few miles from the nearby town of Crieff which boasts plenty of restaurants and shops, and hosts the Highland games in August. Nearby outdoor recreational activities include hiking, horseback riding, trail running, bird-watching and golf at several courses nearby, including the world-famous Gleneagles Golf Course.

Back to: 25 Best Romantic Getaways in Scotland