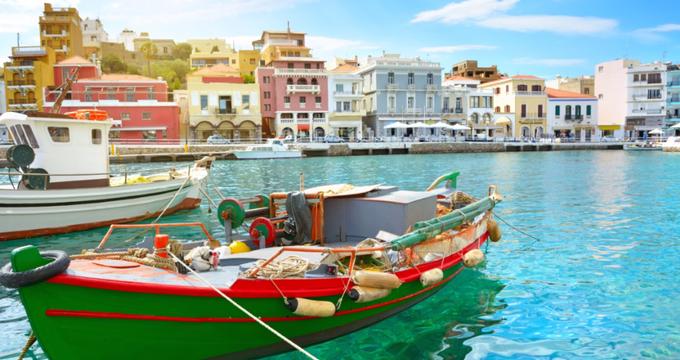 Crete is the largest of the Greek Isles and the fifth largest island in the Mediterranean Sea. It forms the border between the Aegean and Libya Seas. By virtue of its position, it has been seen by a succession of conquerors to be of strategic importance. Romans, Arabs, Venetians and the Ottoman Empire have all left their mark on the island. Crete is 260 km wide with more than 1000 km of coastline. The central area is mountainous with several impressive gorges. Tourism and agriculture are the most important sectors of the economy. The soil is fertile and the climate mild, making the island ideal for growing grapes, olives and herbs. CDC information for travelers. Hours/availability may have changed.


1.The Palace at Knossos 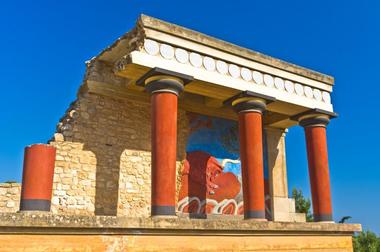 Knossos is considered to be the oldest city in Europe. It was settled during the Neolithic period making it at least 8000 years old. The palace was built during the Minoan era, between 1700 and 1300 BC. Many other structures from the period were destroyed by earthquakes. The main building occupies three acres and the outbuildings a further two, suggesting that the structure was more than a dwelling. Reconstructions done in the 1920s have been criticized for their lack of authenticity. Visitors can choose to pay extra for a guided tour. There is plenty of walking required so water and sensible shoes are advised. 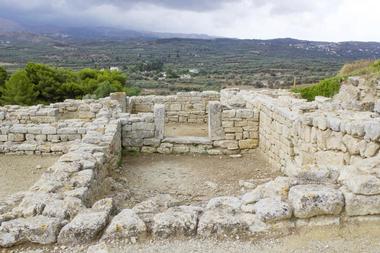 The Palace of Phaistos is situated in central south Crete, south of the island's highest point, Psiloritis. It was built between 1900 and 1700 BC and is thought to be the oldest palace on Crete. The area surrounding the palace was dotted with homesteads. The site was landscaped into three terraces, two of which were built on. Nooks and benches were built into the walls which were plastered and painted. There appears to have been a labyrinth of small rooms, some changing floors. The structure was twice damaged by earthquakes and rebuilt. Visitors have more freedom to roam than at Knossos and the area is more picturesque. 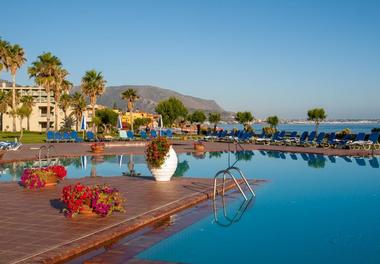 This palace was named after a town nearby. It is situated on the north coast of Crete, north of the Lasithi Mountains. Nearby the remains of a small town or city were found. The ruins that are visible today are those of the second palace. It was approximately 7500 square meters and thought to have been built in 1650 BC. It is similar to the first palace which was destroyed in an earthquake. There is evidence of trade, craft and administrative activity at the site. Features include alternating wood and stone pillars, a giant staircase and a pillar crypt. 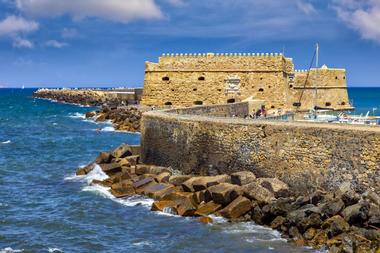 This low, square structure is situated on the western pier of the Heraklion harbor. It is a Venetian fortress, also known as 'Castello a mare' or fortress of the sea. It was rebuilt in the 16th century and has been damaged and repaired several times since. The walls on three sides are 8.7 meters thick at the base and there are three strong, wooden doors at the entrance. There were 18 cannon positions on the ground floor and 25 on the upper level. The ramparts have been restored and a marble relief of the winged lion of Venice is almost intact. 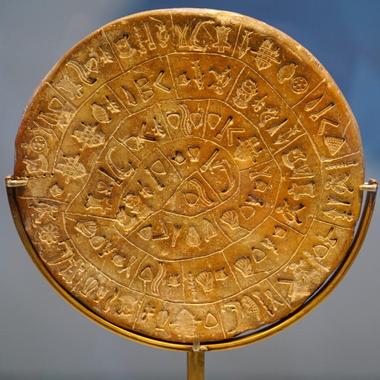 
This museum is one of the largest in Greece and the most significant in Europe. It chronicles the entire history of Crete. There are artifacts and exhibits covering approximately 5500 years, from Neolithic to Roman times. There are permanent, temporary and touring exhibits. The museum was built in the center of the city, in three phases from 1935 to 1958. It is located on the site of the Catholic monastery of St Francis which was destroyed by earthquake in 1856. The ruins are visible in the museum grounds. The museum has educational outreach programs, conducts research and has a schedule of cultural programs. 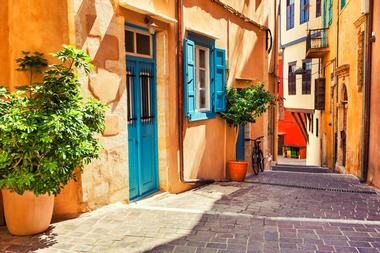 
Chania is the second biggest city in Crete and can be divided into the modern city and the old town. The boundary of the old town is the old Venetian walls, most of which have been destroyed. The hill in the center has been settled since neolithic times. The Eleftherios Venizelos Square is the heart of the tourist activity. The Venetian harbor has structures of historical significance, including a 16th century lighthouse. The old town bears the scars of many conquests, including Venetian, Arab, Byzantine and Egyptian. There are quaint alleyways, old arches and ancient stairways to explore.

7.The Gorge of Samaria 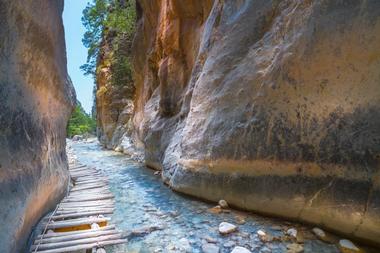 The gorge is in the National Park of Samaria, in the White Mountains. It is the second most popular attraction on Crete and attracts a quarter of a million hikers from May to October. It is considered too dangerous to walk in winter because of the high water levels. The walk is 16 km long and takes between 5 and 7 hours. It starts at an altitude of 1230m and ends at the village of Agia Roumeli on the Libyan Sea. The terrain is rough, rocky and steep, between vertical cliffs and ancient cyprus forests. An afternoon start will make the walk less crowded and cooler. 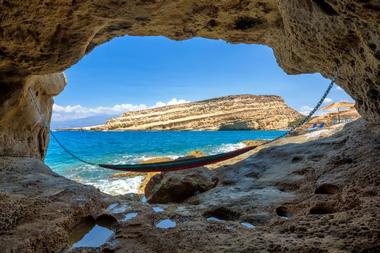 Matala is a Blue Flag pebble beach in the Bay of Messara, in the central south coast of Crete. It is the place where Zeus is said to have swum ashore, disguised as a bull. The hippy movement of the 1960s and '70s saw a surge of foreigners moving to the area. Despite being a popular tourist destination, it is still a quiet fishing village set in a safe harbor. The beach is overlooked by sandstone cliffs with carved out caves, created as tombs for Romans and early Christians. Along the beachfront, there are restaurants, bars and sports facilities, such as beach volleyball and children's play areas. 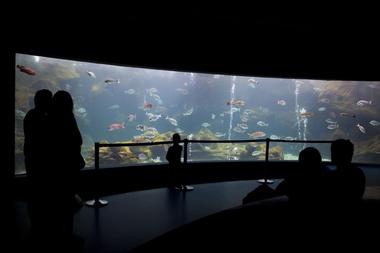 The aquarium is situated in the small village of Gournes. It was established in 2005 and operates under the auspices of the Hellenic Center for Marine Research. It houses 60 tanks, holding more than 2000 specimens of marine flora and fauna. The various ecosystems and species are representative of those found in the Mediterranean. Two meter sharks and giant turtles are among the highlights. Audio and guided tours are on offer as well as longer behind the scenes presentations. The aquarium hosts scheduled events such as dinner 'under the sea' and Carols by Candlelight, as well as those personalized for birthday parties and other private occasions. 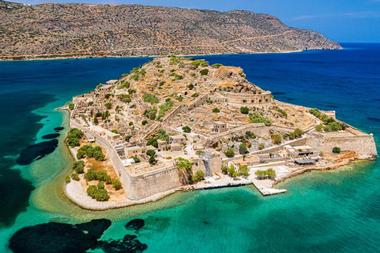 Spinalonga is a tiny, man made island off the north east coast of Crete, close to Plaka. Venetians carved it out of the coastline and erected a fortress and blockhouses to defend the mainland. The strategy proved successful as it was the last Venetian outpost for more than 50 years after they were defeated by the Ottomans. The same scenario played out when a Turkish remnant occupied the island after the Cretan revolt in 1878. In 1903 they left and the island became a leper colony until a cure was found for the disease in the mid 20th century. Several ferries visit the island each day. It is uninhabited but worth a day trip. 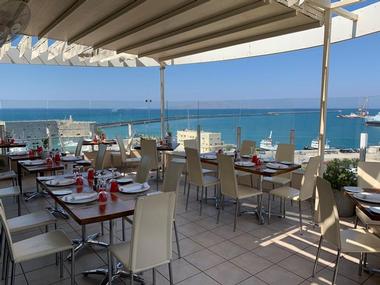 This restaurant is one of three in the Lato Boutique Hotel in Heraklion. From the balcony, diners can look out over the old harbor and ancient Venetian fortress. Over dinner on a clear night, the stars create a romantic backdrop for fine dining. Fresh seafood, tender meats and seasonal salads are the order of the day. The herbs mentioned in the name, add aroma and flavor to the contemporary creations. To round off the meal there are choices or combinations of traditional coffee, home-made ice-cream, flavorful desserts and cocktails. The restaurant is open from 13:00 till late. 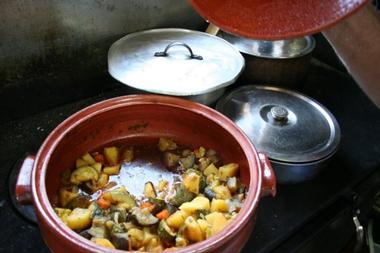 This culinary center is a 23 km drive from Chania, on a winding road, up into the mountains, past vineyards, olive groves and fields of wild herbs. The ecological ethos of the farm-to-table restaurant is to serve authentic Cretan cuisine, prepared the traditional way. The cooking is intuitive, without reference to formal recipes. The ingredients are sourced on the doorstep and cooked, using Cretan ceramic pots, in ovens and on an open fire, fueled by local wood supplies. The seating is rustic, under a reed covering for shade, with views of the cooking and beyond to the Mediterranean. Musicians add more local flavor. 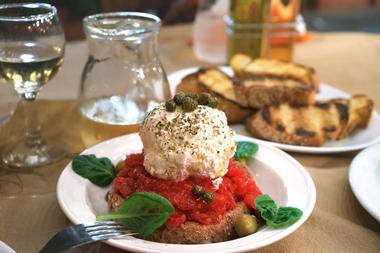 In our Family Restaurant the traditional element completes a hospitable environment, while the pure variety of local products combined with the experience and the love for the Cretan Traditional food promise you some unique taste combinations and enjoyable meals. 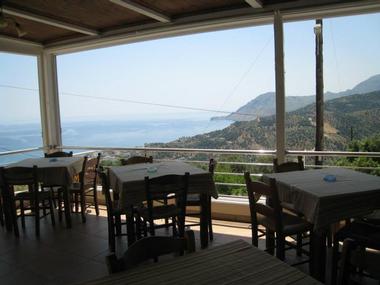 Dionyssos tavern is situated on the main road, at the entrance of the Mirthios village, near Plakia. It is set in the mountainside with panoramic views of the bay and the Libyan Sea. The restaurant faces west where the sun lingers over the sea, before setting. Using Mediterranean herbs and spices and other locally sourced ingredients, Dionyssos presents traditional Cretan cuisine with a modern twist. Snails, beef and goat meat can all be found on the menu. The recipes can be found on the web site. 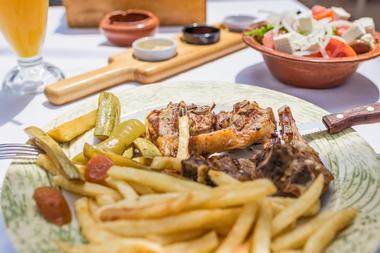 Situated at the edge of the old Venetian harbor in Chania, Christostomos is the ideal place for a meal before or after a stroll. The décor depicts traditional Cretan life with tools and other household objects adorning the walls. Food is cooked using authentic wood-fired stoves and ovens. Lamb, goat, beef, snails and rabbit are standard ingredients, sourced from the Sfakia region of Crete. Local cheeses and virgin olive oil go well with the fresh homemade bread. The restaurant is open 7 days a week. 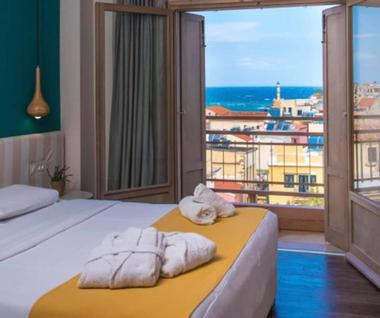 Elia guesthouse is 25 kilometers from Chania, on the slopes of a hill overlooking the Mediterranean. The nine suites are all individually decorated with antique furniture. These and sundry other buildings were once part of a 200 year old farmstead. The hospitality and meals are traditional and the atmosphere is serene. Guests can lie in a hammock, swim in the pool or soak up the view over drinks. Elia also has a spa, including holistic treatments and a whirlpool. Close by is the world's oldest olive tree. Within walking distance there are Venetian ruins, Byzantine churches, waterfalls and the beach.

18 Best Things to Do in Bergen, Norway

24 Best Things to Do in Santiago de Compostela, Spain

25 Best Things to Do in Nice, France