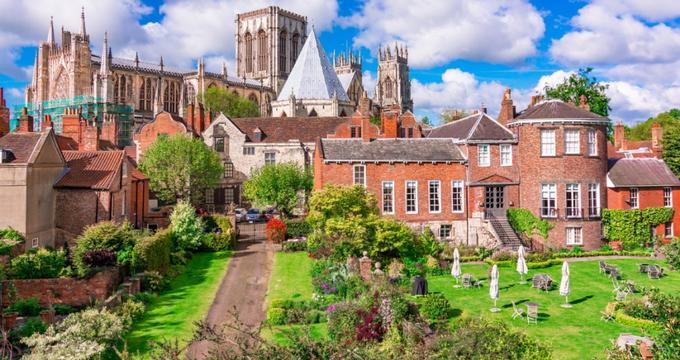 York is a county town, situated at the confluence of the Ouse and Foss Rivers. It was founded in Roman times and appointed as the capital of the Roman Province of Britannica Inferior. It was prominent during the Viking era in the area known as Jorvik. The minster was established in the Norman era, circa 1100, and the city became a major wool trading center during the Middle Ages. It was a railway hub and confectionery manufacturing center in the 19th and 20th century. The damage caused by bombing during World War II took more than a decade to repair and the city was severely affected by the flooding of the Ouse River in 2000 but remains a thriving tourism destination. 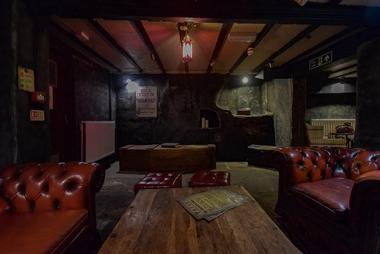 The dungeon experience is a 75 minute journey through 2000 years of York history. Tourists meet iconic characters, played by actors, and take in the sights, sounds and smells of the ages. Animatronics, special effects and life-sized models make up the live action, horror show. York's rich history includes the plague, secret catholic churches, Vikings, highwaymen and witch trials. The tour follows the River Ouse and is periodically affected by flooding. The tours have been remodeled and rescripted to compensate. The dungeon tour is part of an international chain which includes London, Amsterdam and Hamburg. Tours leave every 7 minutes. 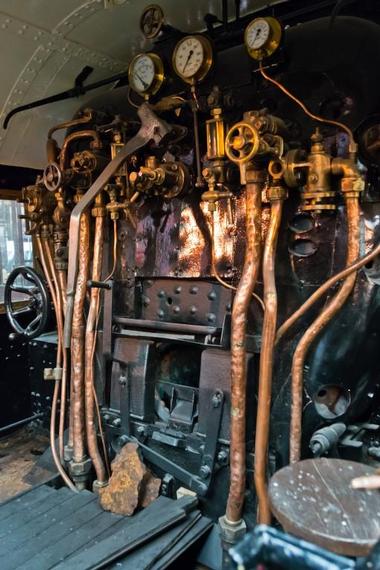 This museum's aim is to showcase the past, present and future innovations associated with the railway and the social and economic impact it has had on society. The 'Brass, Steel and Fire' exhibition focuses on the 1829 Stephenson's Rocket and how it influenced the course of the Industrial Revolution. A plethora of small-scale experiments and homegrown creations that resulted from its invention are on display. The Great Hall houses examples of engines through the ages and a multi-faceted, model railway system can be viewed from several angles. Visitors can enjoy train rides and use simulators to drive engines.

Clifford's Tower is an English Heritage site. It was built in 1245 as part of a Medieval castle and played a key role in the dissolution of the monasteries, the English Civil War and the Anglo-Scottish wars. It has been used throughout the centuries as law courts, a prison, treasury, mint and election office. Its design is unusual for England but similar to the 12th century Tour Guinette at Etampes, in France. It has four thin-walled lobes and is built on an artificial mound. The old city of York can be viewed from the walkway at the top of the tower. 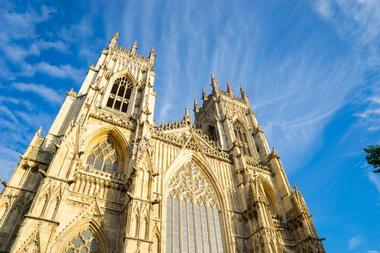 There have been churches on or near the site of the minster for 1400 years. The current cross-shaped cathedral was built from 1080-1100 but continued to be altered over the next 400 years. It was finally reconsecrated in 1472. It has been severely damaged by fire four times but fortunately suffered no war damage. The magnificent collection of over 100 stained glass windows were removed for safe-keeping during both world wars. The minster has a collection of 300000 objects, representing 2000 years of church history. Volunteers offer lunch time talks on the stained glass, guided tours, tower trips and Hidden Minster tours. 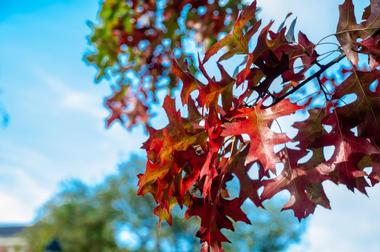 
This 20 acre park was donated to the city of York by the Rowntree company as a memorial to the employees they lost during the First World War. Sadly, the wrought iron gates at the entrance were erected to commemorate the additional lives lost in the Second World War. It was York's first municipal park. It has picnic areas, a large lake, a canal and a water cascade. Sports facilities include tennis courts, a bowling green, a basketball court and a skateboarding area. Friends of Rowntree Park volunteers regularly organize events and activities. The park is next to the River Ouse which periodically causes flooding. 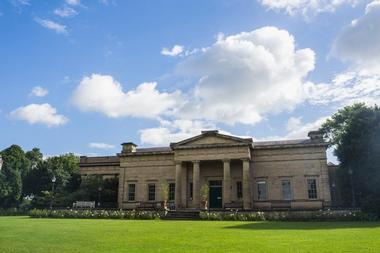 
The museum is situated in a Georgian building, in the center of York, on the River Ouse. There are five galleries with exhibits of the Vikings, Medieval and Roman York, the Jurassic era and York's first photographs. The museum's vast range of collections includes objects related to archaeology, astronomy, biology, geology and numismatics, among others. Regular activities include a book club, a Young Astronomers' four week course, garden tours and Museum Monkeys program for 2-5 year old children. The shop has a stock of Roman, Viking and pre-history thematic items and a range of gifts for gardeners. 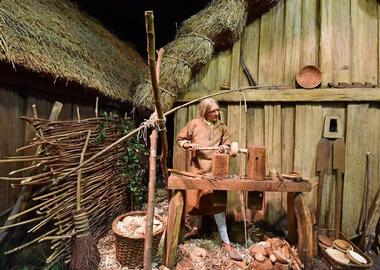 It was a commonly held belief that York was a Viking trading hub between 866 and the Norman conquest of 1066. Significant proof was uncovered at Coppergate in the late 1970s. At a depth of 9m, bits of buildings, textiles, clothing and pottery were discovered in a layer of moist peat. Along with the seeds, animal bones and insect remains that were found, scientist pieced together what life looked like in that era. Interpretations of the findings have been brought to life in the Jorvik Center through the skills of thatchers, potters, taxidermists, carvers, coopers and other artisans. The shop sells Viking memorabilia and the Center hosts the Jorvik Viking Festival each year in February. 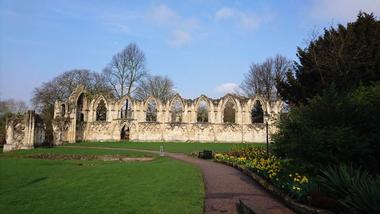 The British Royal Family donated the former grounds of the St Mary's Abbey to the Yorkshire Philosophical Society in 1928. In 1930 the museum was built and the gardens established. There are currently 4500 species of plants and trees and 40 species of birds in the 10 acre garden. Besides the ruins of the abbey, there are the remains of Roman and Anglican forts and St Leonard's hospital chapel, as well as parts of a Roman wall. The octagonal observatory in the grounds was built in 1850 and upgraded in 1981 with a larger telescope. The garden is open daily and admission is free. 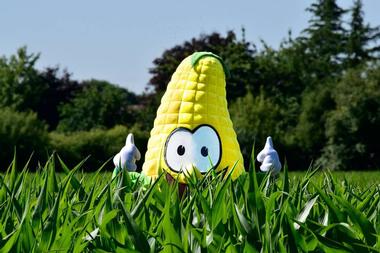 There are more than 20 activities at York Maze. Most of their names play on words related to maize, corn or cobs. Each year a million or more maize plants are planted to create the new design for the Giant Maze. Other thematic mazes include a Jurassic maze where dinosaurs roam, a 3D mineshaft maze which includes bridges and tunnels, and a maze made up of illusions. Other activities include bouncing around like popcorn, the 4m Volcorno slide, a Cobstacle course, the Cornwall climbing wall and the Cobweb play area. The Kernel coffee shop serves light refreshments. York Maze is open from mid July to early September each year. 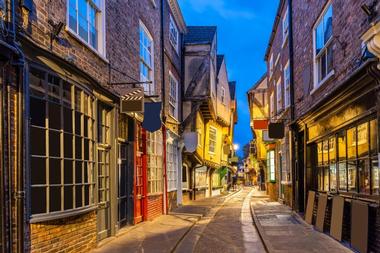 There are several Shambles in the United Kingdom. The name refers to a number of butcher shops in an area which form a collective meat market. The York Shambles was mentioned in the Domeday Book of 1086. The alleys of overhanging, half-timber framed buildings now contain restaurants, bookshops, bakeries and other specialty shops. Meat hooks are still visible in many of the shops. The Daily Shambles Markets can be found between The Shambles and Parliament Street. Saint Margaret Clitherow was married to a butcher and lived in The Shambles. She was executed in 1586 for hiding Catholic priests and was canonised in 1970. 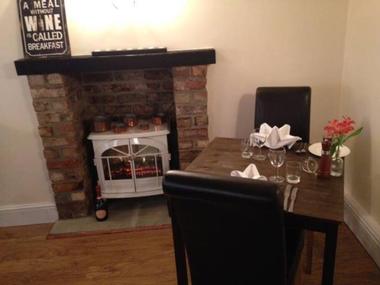 Chef patron, Nick Julius established this restaurant in the center of York in 2005. It is housed in a Grade II listed building, belonging to English Heritage, in the shadow of Clifford's Tower. The structure was built in 1825 by the Georgian architect, G.T. Andrews for his home and practice. The independent restaurant serves contemporary European cuisine and offers fine dining in a charming atmosphere. There are a la carte lunch, dinner, vegan and Sunday menus as well as 2-3 course set menus. These change with the seasons and availability of ingredients. 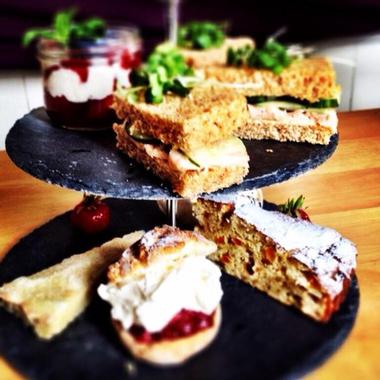 Chef owner, Chris Pagnell, is self-taught and offers modern British cuisine at this restaurant in the center of York. The bistro is in Gillygate, a busy street of shops and businesses, adjoining the city walls and named for its proximity to the church of St. Giles. Breakfast, lunch and supper is served and diners have a choice of seating in the front room, the garden room or the outside in the secluded garden proper. Café No 8 offers an 'at home' range of meals, for collection or delivery. The menu includes a starter, main course and dessert. 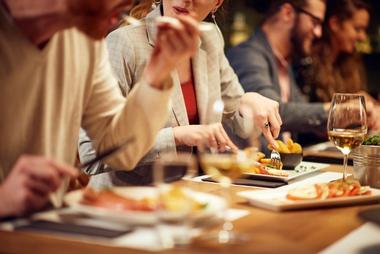 This boutique hotel is part of the Best Western collection. It is situated on the corner of Petergate, the main Roman road through York. The building was formerly three dwellings that were used to house the clergy serving at York Minster. The restaurant has a magnificent view of the minster. It is elegant and formal, yet intimate and has been rated in the Michigan guide. Classic British cuisine is served for breakfast, lunch and dinner. There are special menus for Sunday lunch and festivities such as Christmas and New Year.

14.House Of The Trembling Madness 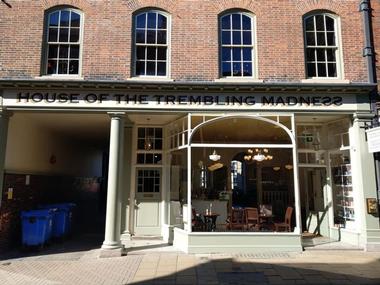 © House Of The Trembling Madness

The 'trembling madness' refers to delirium tremors, DTs or 'gallon distemper' that is brought on by drinking too much intoxicating liquor. The multi-story medieval ale-house, on Stonegate near the minster, was built in 1180 and is continuing to ply the trade. More than 5000 products are sold at the House, including 900 beers, meads and ciders. A quirky taxidermy collection adorns the place. There are two apartments for hire behind the House. One is decorated in 1970s kitsch and the other is 600 years old and said to be haunted. The House Of The Trembling Madness was named as the UK's Independent Craft Beer Retailer in 2019. 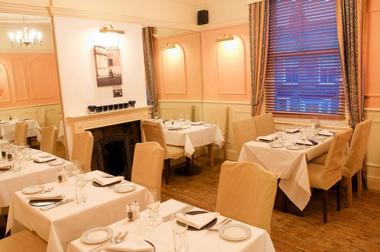 Michael Hjort is the chef proprietor of this fine dining restaurant which was established in the 1990s. He has been the principal organizer of the York Food Festival since 1997 and is a director of Make it York, the local tourism organization. The restaurant offers modern British food in a relaxed, informal atmosphere. Large murals of happy diners adorn the walls. It scores a 5 in the Good Food Guide and is featured in all of the main food guides. In 2001, Michael opened Melton's Too, now known as the Walmgate Ale House. The restaurants focus on sustainability, seasonality and supporting local businesses. 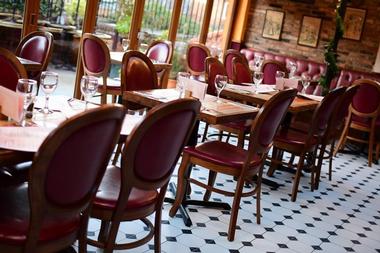 There are two Rustique restaurants, both serving homely, traditionally cooked, French cuisine. The Castlegate bistro is next to Clifford's Tower. The shabby chic décor unites the intimate lower dining area and the more spacious upstairs space. There is a perpetual atmosphere of bonhomie. The Lendal restaurant is situated in an old redstone building with stained glass windows, in a busy shopping area. Their menus differ slightly. There are a la carte and set 2-3 course menus to choose from. The desserts are indulgent and designed to comfort. French champagne and sparkling wines feature on the extensive drinks list.

You are reading "What to Do in York, UK this Weekend" Back to Top

17.The Star Inn The City 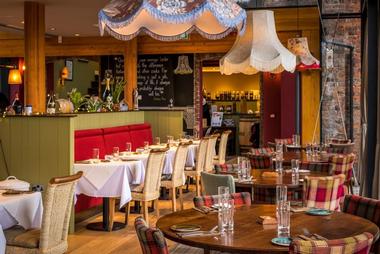 © The Star Inn The City

Following the success of his Star Inn in Harome, North Yorkshire, Andrew Fern brought the restaurant concept to York. The aim was to 'bring the countryside to town'. The restaurant is an all-day brasserie that offers a seasonal menu, specializing in chargrilled meat. It is located in an old brick engine house, on the River Ouse, next to the museum gardens. It is close to the minster and the historic Lendal bridge and tower. Michelin starred and guest chef dinners are offered regularly, as well as gin tasting and summer garden parties.