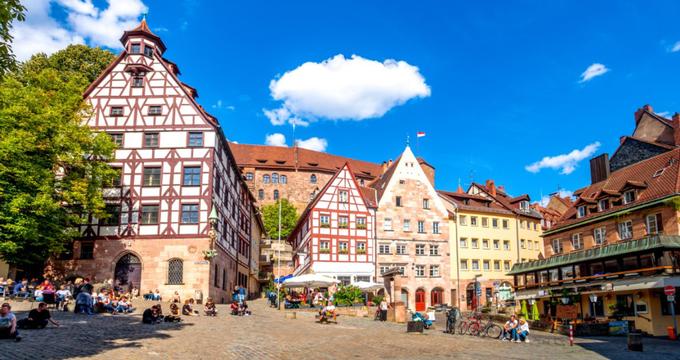 Throughout its thousand year history, Nuremberg has risen to prominence several times. It is currently the second largest city in Bavaria and the unofficial capital of Franconia. It was a free imperial city state and considered the unofficial capital of the Holy Roman Empire in the 14th century. It became the center of the German Renaissance in the 15th and 16th centuries. Nuremberg rose to power again in the Nazi era as Hitler sought to capitalize on the city's history. It was severely damaged by Allied bombs during the Second World War but is once more in the ascendancy as an industrial center and tourist attraction. CDC information for travelers. Hours/availability may have changed. 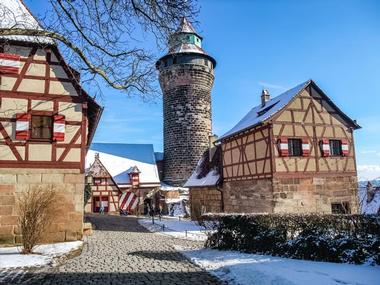 This castle was built on castle rock and its silhouette has become a Nuremberg landmark. It was first documented as a royal residence in 1050. The royal connection, coupled with its position at the crossroads of important highways, caused the town to prosper. It became a major junction for trade and finance, and for a time was one of the centers of the empire. In 1340, the town hall replaced the castle as the administrative center. The royals moved to more comfortable accommodation and an epidemic in town finally sealed the castle's fate. The castle and grounds are undergoing repairs but are open to the public. 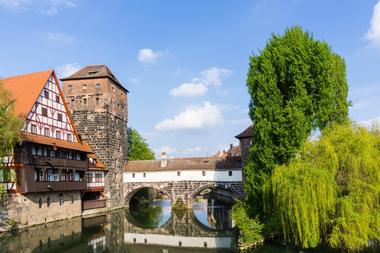 At 48m long, the Weinstadel, translated 'Wine steward', is the largest half-timber building in Germany. There are two half-timber floors above a brick foundation and ground floor, and three further floors in the saddle roof. It was constructed in 1446 and for more than a century was used for only three days a year, during Holy Week, to feed and house lepers. In the late 16th century, it was used as a hospital and a home for artisans and indigent families. The ground floor was used to store wine, hence the name. Since 1950 it has been a student dormitory. It is a photogenic subject in all seasons. 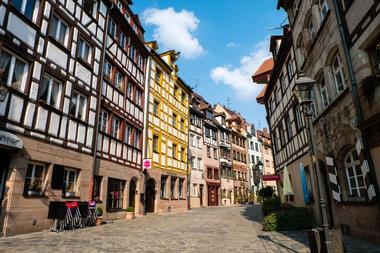 The medieval tanners who worked with white leather lived in this neighborhood in old town Nuremberg. The half-timber homes each had gardens and their own wells which bears testimony to the wealth created by this niche trade. More than 20 of the houses escaped the bombing of World War II and form the largest and best preserved ensemble of artisan houses in the city. The street has been made into a pedestrian mall and the houses have become cafés, bars, boutiques and specialty shops.

You are reading "16 Best Things to Do in Nuremberg, Germany" Back to Top 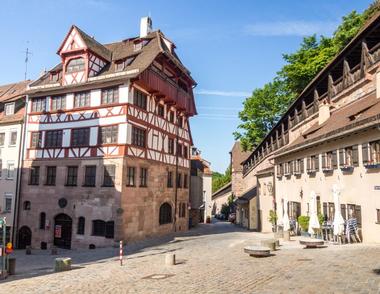 Dürer is Germany's most famous painter. He lived in this massive half-timbered house from 1509 until his death in 1528. Nuremberg was in its heyday and the city attracted many artists. As early as 1675, the significance of the house was recognized and efforts were made to preserve it. In 1828 it became one of the first memorials to an artist, in the world. The Dürer Room contains high quality copies of his works. Tours are led by an actress posing as his wife, Agnes. Workshops on historical painting techniques are held at the house. 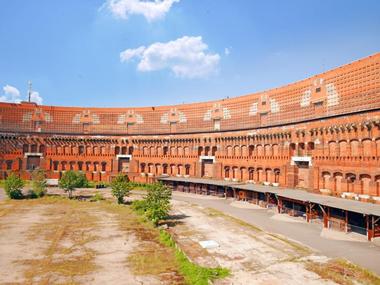 
Hitler declared Nuremberg as the 'City of Rallies' in 1933. Eleven square kilometers were set aside for facilities. As self-appointed 'Builder-in-Chief', he oversaw the minutiae of the planning process but delegated construction to architect, Albert Speers in 1934. World War II put a stop to construction and few of the elements of this intended showcase of his power and support were completed. A two kilometer long parade avenue, and grounds with towers and ramparts, were never completed. A model of an amphitheater capable of seating 400000 was constructed. The gigantic ruins remain as testament to the megalomania that ended in catastrophe. 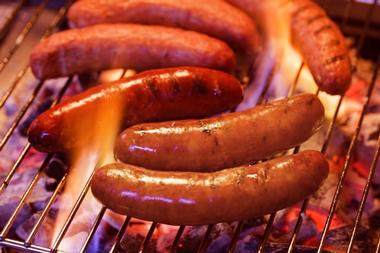 
The 'Golden Star' restaurant is the oldest bratwurst tavern in Nuremberg. It was built in 1375 and is possibly one of the first houses to be built in the city. The tavern was first registered in 1640 and in the following year obtained permission to slaughter pigs in a domestic setting. In 1980 it was rescued from demolition. Rostbratwurst is made fresh, daily, from natural ingredients. It is prepared over a traditional beech wood fire. The restaurant can seat 150 inside, 70 outside and an additional 40 in an adjacent building. It is open 7 days a week from 11 am to 10 pm.

You are reading "16 Best Things to Do in Nuremberg, Germany" Back to Top 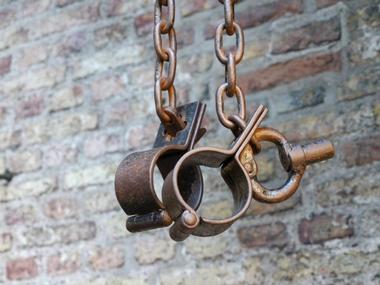 Until 1332, the Old City Hall was known as the Bread Hall where bakers made and sold their wares. During the conversion, earth was piled up around the ground floor, turning it into a cellar. This was done to neutralize the threat of floods. The cellar became the city's interrogation center and a prison for those awaiting execution. There are 12 small cells and a torture chamber in the medieval dungeon. When the Ehrenhalle (Hall of Honor) was renovated in 2017, the guided media tours were revised. There are five tours a day in various languages. Children under 10 are not permitted. 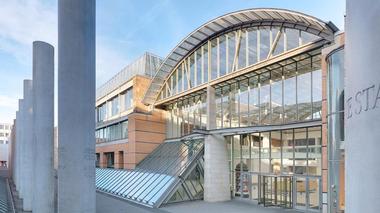 Following the failed attempt at German unification in 1848, a group of individuals, led by Franconian Baron Hans von und zu Aufsess, established the Germanic Museum. The intention was to assemble a compendium of all things pertaining to the history and culture of the German-speaking world. Today, there are 1.3 million objects owned by the museum, 25000 of which are displayed in 23 collections. These include coins, paintings, documents, textiles and toys, many of which have been digitized. They provide a chronological overview from pre-history to the 20th century. The museum buildings themselves constitute a collection of structures from various eras. 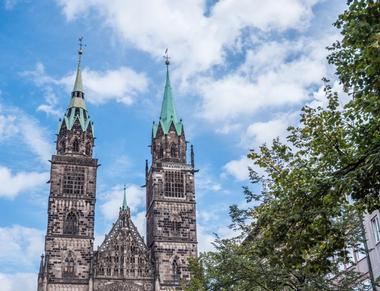 The Gothic St Lawrence basilica was built between 1243 and 1315 in the center of Nuremberg. It was one of the first Roman Catholic churches to become Lutheran and is the largest protestant church in Bavaria. It escaped the purge of the Reformation, retaining the works of art that been donated. Ironically, on the name day of St Lawrence, on 10 August 1943, the church was severely damaged by Allied bombing. It was hit again on 2 January 1945. It took until 10 August 1952 for the church to be restored to service. Concerts, services and tower tours are open to the public. 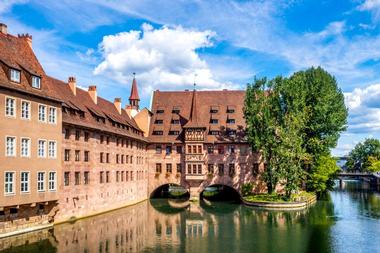 The Hospital of the Holy Spirit was the largest of its kind in medieval Nuremberg. It was funded by the biggest personal endowment in the Holy Roman Empire up until 1500. Imperial Mayor, Konrad Gross, had the hospital built in 1332 for the care of the elderly and the needy. Later it was extended over the river Pegnitz. It is best viewed and photographed from the north bank of the river. Part of the building is used as a retirement home. The restaurant on the premises is open to the public. It has a medieval atmosphere with candlelight and hunting trophies mounted on the walls. 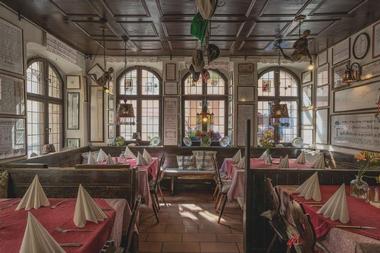 In 1951, Josef Höllerzeder, a butcher, bought the medieval half timber-framed wine tavern between Albrecht Dürer house and the Weinmarkt, near St. Sebald church in the old town. His mother did the cooking. His grandson, a trained chef, runs the restaurant now. Regional Franconian and Bavarian foods, such as sausage, steak, seafood and seasonal produce are served. Several of the patrons are third generation customers and are welcomed by name. Albrecht Dürer Stube is a small restaurant with lead glass windows and an elegant Dürer-inspired décor. Booking is essential. It is open 7 days a week but closed on Sundays in summer. 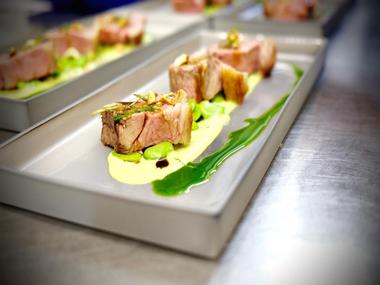 This gourmet restaurant rates two stars on the Michelin guide. This is remarkable as most of the dishes are vegetarian and the menu is based on local, readily available ingredients. There are several options of multi-course tasting menus with wine pairing. The restaurant is situated in an old house in the town center and the décor is vintage German. There are two head chefs who personally attend to guests. They also give courses on how to make four- and five-course meals. The shop sells their cookbooks and five flavors of Lebkuchen, the German gingerbread biscuit. 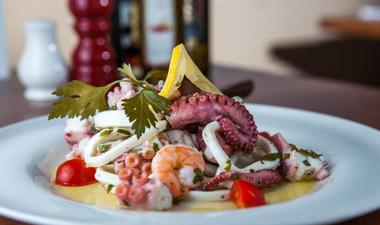 In 2008, Antonio Lo Po and Donato Albano restored the premises on Theatergasse and opened a homely, southern Italian restaurant. They serve generous portions of meat, fish and poultry in pasta and on pizza. They also have a number of vegetarian options on their menu. The pasta and pizza bases are made fresh daily and the toppings are sourced locally. The kitchen is visible from the dining area so patrons can learn some of the preparation techniques. There are over 60 Italian wines to choose from. Takeouts, delivery and catering services are offered. 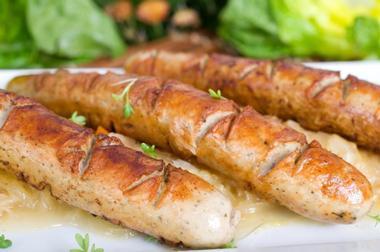 There are two bratwurst restaurants run by the Behringer family. Bratwurstglöcklein is situated in the Sebalder Platz and is reputed to have started as a market stall there centuries before. The area was obliterated in World War II and reconstruction was not envisaged. An exchange of land was negotiated and Bratwursthäusle came into existence. Thereafter, Bratwurstglöcklein was rebuilt and both restaurants were acquired by the Behringer family. The bratwurst is served, with mash and mustard, in traditional bell-shaped pewter dishes, said to have been copied from the shape of the market bell. The in-house butcher also makes canned sausages which are sold online. 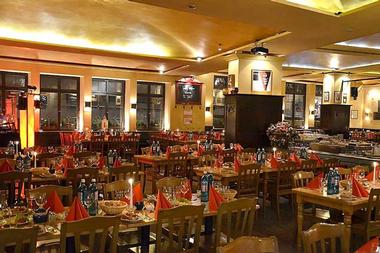 This restaurant is right in the heart of old town Nuremberg, on Rathausplatz, where the annual Christkindlesmarkt is held. It is the biggest bratwurst restaurant in the world. Parts of the complex date back to the early 15th century. There is seating for 600 inside, in four different venues. Outside, another 250 can be seated in the beer garden between the Old Town Hall and the market. Set menus and buffets can be arranged for parties of up to 500 people. Franconian cuisine is served in the pub tradition. There are vegetarian, gluten-free and lactose-free menu options. 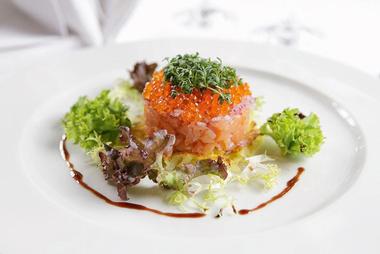 Ingo Fischer opened his gourmet restaurant in 2003 in a quaint 16th century house, one of a row of listed buildings. The décor inside is reminiscent of an old style inn, with elegant table settings. The food is of an international standard. There are two set menus, a seafood and a meat option, with palate cleansers in between courses. The a la carte menu is minimalist and changes often. Each item is prepared with the finest local ingredients. Champagne is offered by the glass as an aperitif. The drinks menu includes cocktails and wines from Germany and Austria.

You are reading "What to Do in Nuremberg, Germany this Weekend" Back to Top

You are reading "16 Best Things to Do in Nuremberg, Germany " Back to Top

12 Best Things to Do in Sintra, Portugal

25 Best Things to Do in the United Kingdom

25 Best Things to Do in England