16 Best Things to Do in Leipzig, Germany 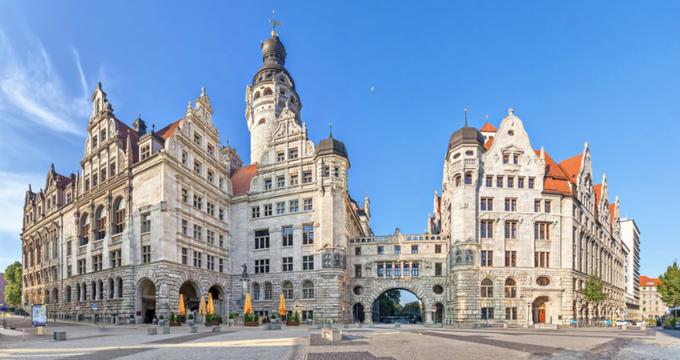 Leipzig is the most populous city in Saxony, Germany. It was established before the Holy Roman Empire, at the crossroads of the Via Regia and the Via Imperii medieval trade routes. It is informally known as Heldenstadt (Hero City), a place where tyrants are brought down. Napoleon lost at the Battle of Nations outside the city and the Soviet army rooted out the last of the Nazis at Leipzig. The Monday Demonstrations started in a church in the old city and ultimately led to the fall of the GDR and Soviet rule. It is a musical also center, where musical genres from Bach to techno are enjoyed. 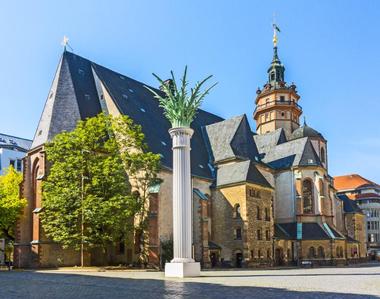 St Nicholas church was built in 1165 in the center of town, at the junction of two important trade routes. The original architectural style was Romanesque and Gothic enlargements were made in the 16th century. The Baroque tower and portal were added in the 18th century. The congregation converted to Protestantism during the reformation and it is said that Martin Luther preached there. Johan Sebastian Bach was music director during the 18th century and several of his compositions debuted at the church. The Monday Demonstrations which ultimately led to the fall of the Berlin wall, started as prayer meetings at St Nicholas. 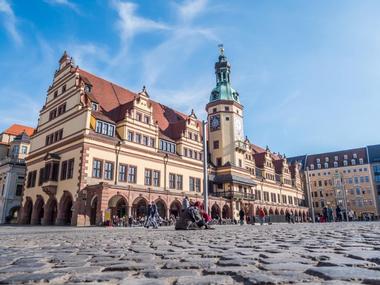 The old town hall is a Renaiisance building with a Baroque tower. It was built in 1556 and for 350 years was the seat of city administration. It is currently the city museum and has a 25 square meter model of Leipzig as it was in the 19th century. The permanent exhibition tells the story of the city through the lens of German history. The ballroom is used for festivals, weddings, craft fairs and concerts. It is the dominant feature of the Market Square. Weekly farmers' markets and annual holiday fairs are held in the square. 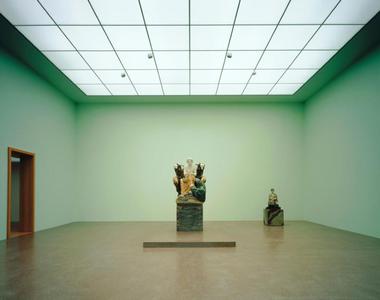 The Leipzig Art Association was founded in 1837. There were several generous donations of paintings and other artworks at the outset. The original Renaissance museum was constructed from 1854-1858, facing Augustusplatz. In 1937, under the Degenerate Art campaign, close to 400 Impressionist paintings and prints were confiscated by the Nazis. The building came under heavy fire from Allied bombs in 1943. Fortunately the art had been moved for safekeeping. The collection was itinerant for 61 years until the present glass 36m high 'cube' museum was built. It houses 3500 painting, 1000 sculptures and 60000 graphic sheets. The building is feted for its simplicity and the views over the city. 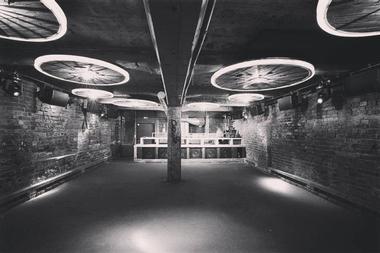 The Distillery is the oldest techno-club in the federal states. It is also one of the most famous and influential in Germany. It sprang up, illegally, in 1992, shortly after the reunification of Germany. Music enthusiasts occupied an abandoned brewery building, without power or water. They had two generators, one for the music system and one for the lights. The setup fell foul of the city's safety regulations and the club was forced to move to a disused railway building. From the outset, the club attracted local and foreign support and has become an institution and a symbol of liberal German culture. 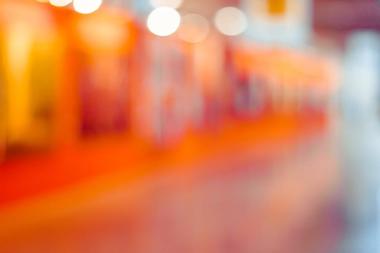 
The 'Round Corner' was the headquarters of the dreaded Stasi or German secret police during the soviet era. The building was occupied in 1989 during the Peaceful Revolution, in order to prevent the destruction of documentation. It is now a museum dedicated to the pursuit of freedom and democracy and creating awareness of the impact of dictatorships on civil and human rights. The museum exhibits material, hosts speakers, and shows films on the history and methods of the Stasi. There are guided tours to the bunker headquarters and along the route taken during the Peaceful Revolution.

6.Monument To The Battle Of The Nations 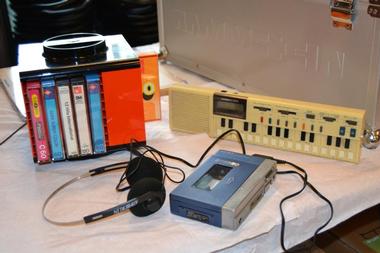 © Monument To The Battle Of The Nations


This monument was erected on the site of Napoleon's defeat in October 1813. A coalition of soldiers from Russia, Prussia, Austria and Sweden took on Napoleon's French army, Italians, Polish and conscripted German soldiers. It was the beginning of the end of Napoleon's reign. He was sent to exile on Elba the following year, the year in which it was decided to create a colossal monument to his defeat. It took 50 years for the foundation stone to be laid and a full century to complete the 91m high monument. There are 500 steps to the viewing platform at the top. 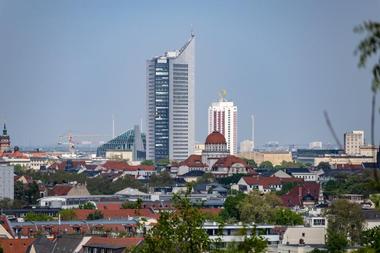 For four decades this building, constructed between 1968 and 1972, was the tallest structure in Leipzig. It was designed to look like an open book but earned the nickname 'Wisdom Tooth'. Both attributes are appropriate for a campus of the University of Leipzig. It is now owned by Merrill Lynch. The original cladding of aluminum has been replaced with granite during refurbishment in 2000. It is 36 stories high with a viewing platform at the top. On the floor below is the Plate of Art restaurant, the highest in central Germany. They serve a varied cuisine with a set business lunch, Sunday brunch, coffee and cake. 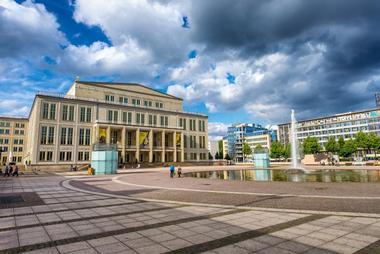 At 40000 square meters, the Augustusplatz is one of the largest squares in Europe. It was laid out in 1785 and named after Frederick Augustus, the first king of Saxony. Prior to its destruction by bombs during Word War II, it was considered to be one of the most beautiful squares in Germany. Today, there is an eclectic mix of historic pre-war, utilitarian soviet era, and modern post-unification buildings lining the square. These include the Opera House (1960), the City Tower (1972) and the University of Liepzig's Paulinium (2007). It is on the inner city's ring road and is a terminus for the tram system.

The history of Mädler Passage began underground with Dr von Auerbach's wine cellars. Anton Mädler saw the potential for an exhibition hall and enclosed the walkway and two stories with glass. It is now an office block and shopping arcade, lined with elegant and distinctive shops. At the Grimmaische Strasse entrance are two statues holding grapes and a vase, references to the wine and porcelain traded there. The octagonal rotunda in the bend is 12m in diameter and covered with a 15m high glass dome. There are 6 internal staircases, each with intriguing architectural features and carvings of cherubs. In the cellar are paintings immortalizing Faust. 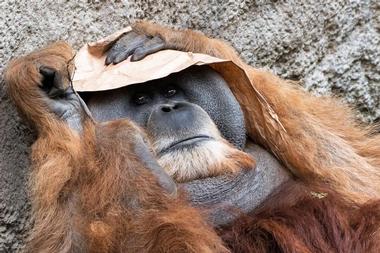 The Leipzig Zoo is known as the 'zoo of the future'. It was established in 1878 and occupies 67 acres of which 4 acres is indoor rain forest. The zoo provides an overview of the world's animal kingdom, from prehistory to modern day. The animals and their habitats can be viewed from below, above and at eye level, through jungle trails, treetop pathways and on the water. The interactive ark stimulates all the senses. There are 850 animal species in total, including cats and bears of the world, reptiles in a terrarium, birds, bees and monkeys on their own island. The koalas live in an indoor eucalyptus forest. 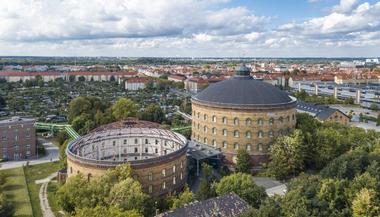 The hybrid word 'panometer' combines panorama and gasometer. In 2003 Yadigar Asisi had the notion to project panoramic scenes onto the 32m high walls of disused gas storage tanks. There are Panometers in Leipzig and Dresden but his work has spread to other parts of Germany and the world. From a height of 15m, spectators are immersed in the multimedia sensation of life-size scenes from locations such as Everest, the Amazon and the Great Barrier Reef. They are transported to historical events like cruising on the Titanic or the 1813 Battle of the Nations in Leipzig. Award-winning exhibits and films are shown at ground level. 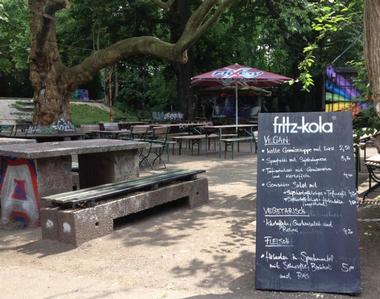 Conne Island has had a long history as a youth center. The building is set in a small woodland area and was erected in the mid-19th century as a restaurant, named the Eiskeller. During the Nazi era the center was used by the Hitler Youth and after 1945, by the FDJ, also a youth organization. Since the reunification of Germany, it is considered to be left on the political spectrum, a position that is clear from the appearance and atmosphere of the center. It is a nightclub and sports center. Music genres such as hip-hop, pink, electronic music and heavy metal are popular. 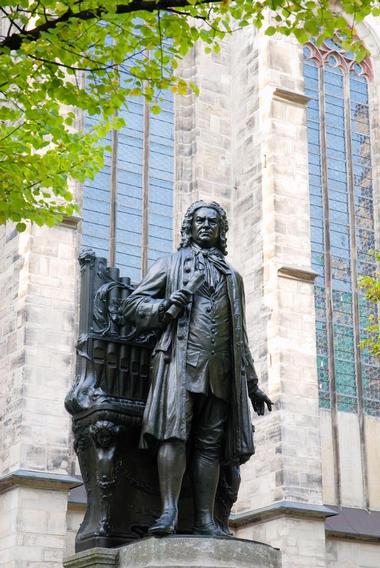 The museum is housed in the home and gardens of the Bose family, contemporaries of Johann Sebastian Bach. It is across the square from St Thomas musical school where Bach was the Cantor from 1723 until his death in 1750. This position included the musical directorship of St Thomas, St Nicholas and two other churches. The museum owns the second largest collection of original Bach works in the world. The permanent exhibitions showcase his family history, the orchestral instruments that fascinated him and documents written in his own hand. The Bach competition and Bachfest are events organized by the museum. 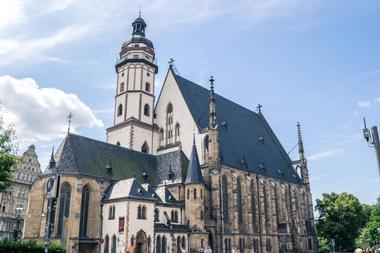 Since the 12th century there has been a church on the site where St Thomas now stands. The choir dates back to 1212. The name was changed in 1217 when a relic of the saint was bequeathed to the church. In 1496 the current building was consecrated. Mozart, Mendelssohn, Wagner and Bach have all featured in the church's history, as did Martin Luther who preached there in 1539. Bach's remains were moved to St Thomas during World War II. It is a fully operational Lutheran church with 4800 parishioners. It is open daily and there are guided tours and a gift shop. 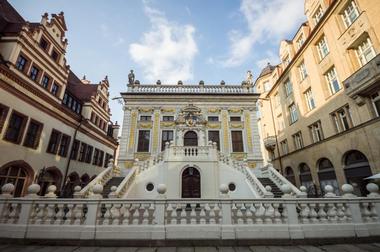 The old stock exchange on Naschmarkt, in the old city center, was built in 1687 by the city's merchants. A neutral space was required in which to negotiated trade deals. The ground floor was leased to merchants and the upper floor was used for auctions and stock exchanges. The design is Dutch Italianate Baroque. The ceiling had exquisite stucco detail and seven allegorical paintings. Unfortunately the building was bombed and caught fire in 1943 and these were lost. It was rebuilt after the war and is currently used for concerts, readings, lectures and theater performances. The hall seats 200 and is available for hire. 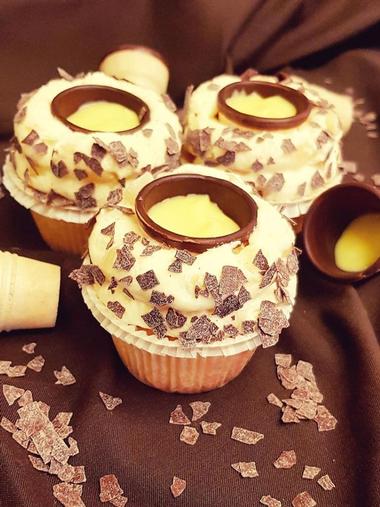 Mintastique is a cupcake emporium. The confectionery is made in all shapes, sizes, flavors and colors. There could be characters from the Mad Hatter's Tea Party or delicate flowers from an English garden. They look delightful among the multi-colored lolly cakes and the new trendy cake pops. These edible treats are a feast for the eyes, made to be enjoyed with a fresh cup of tea of coffee. The gift shop sells books, calendars, chocolates and spices. The cupcakes can be ordered by the dozen. Mintastique caters for parties and offers courses on cake decorating.

You are reading "What to Do in Leipzig, Germany this Weekend" Back to Top

16 Best Things to Do in Leipzig, Germany

19 Best Things to Do in Kuopio, Finland

18 Best Things to Do in Santander, Spain

25 Best Things to Do in Bulgaria