11 Best Things to Do in Kaliningrad, Russia 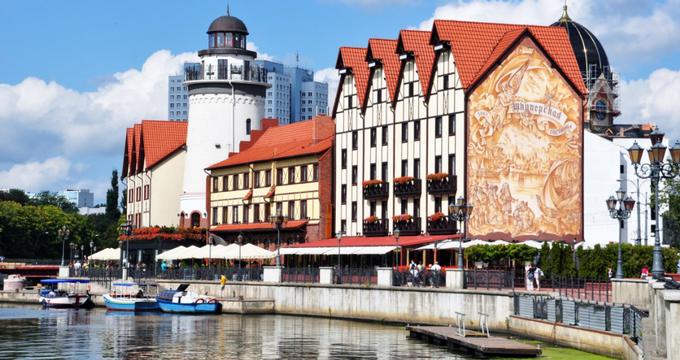 Kaliningrad is the capital of the Kaliningrad Oblast, a Russian enclave on the Baltic Sea, between Poland and Lithuania. Historically, the city has three distinct periods. Until 1255, it was a Prussian city known as Twangste. Thereafter, it was German and known as Königsberg. After World War II the enclave fell under Soviet Rule and the name of the city was changed to Kaliningrad. It has prospered due to its status as a Special Economic Zone. It is the only Russian port on the Baltic Sea that does not freeze over in winter. The Russians built a modern city with few links to the Imperialist past but remnants remain. CDC information for travelers. Hours/availability may have changed. 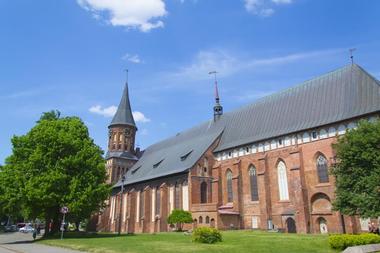 The cathedral is a brick, Gothic construction with two towers and an asymmetric facade. It is situated on the island of Kniephof which was flattened by allied bombing during the Second World War. The cathedral was rebuilt and is a symbol of the city. It was initially a Roman Catholic church and converted to a Lutheran church during the Reformation. It is now a multipurpose cultural center and houses the Immanuel Kant Museum and two chapels, one Lutheran and the other Russian Orthodox. The concert hall seats 700 people. There is a grand organ and a small one for the choir. Mini concerts are held daily and evening concerts, twice a week.

2.Museum of the Ocean World 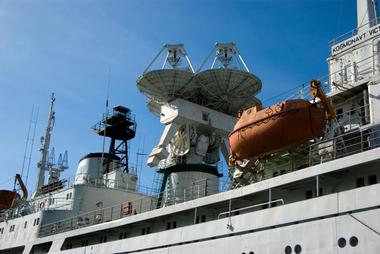 This award-winning museum was established in 1990. It uses several lenses through which to interpret its collections, such as natural history, maritime history, ethnography and science. It has a fleet of museum crafts, including a research vessel, a submarine, a fishing trawler, an icebreaker and a seaplane. There is an aquarium, an extensive collection of seashells and corals, and exhibitions on marine geology and paleontology. Guided tours are available. A major event is the 'Long Night of the Museum', where the museum becomes a theater and the exhibits, the cast. 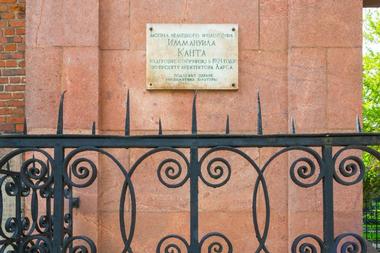 Immanuel Kant was the father of German philosophy. He was born in Königsberg in 1724 and never left his hometown. He taught mathematics, science, physics, geography and other subjects at the Albertina University. He also wrote on the topics of ethics, metaphysics, religion and political philosophy. The university bought an area near the north wall of the cathedral in which to bury their professors. Immanuel Kant was buried inside the cathedral but his remains now reside in a mausoleum, outside on the north east corner. He was much admired by Lenin and this was thought to be the reason that the cathedral enjoyed Soviet favor after their occupation of the city. 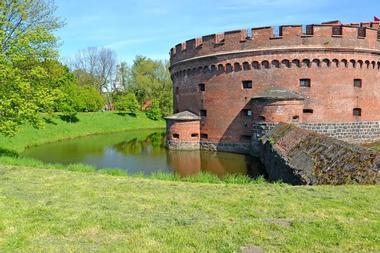 Amber is the fossilized resin of ancient conifers. This is Russia's only amber museum. It is housed in a fortress dating back to the mid 19th century. There are over 1000 square meters of display area, over three floors. The content is divided into two sections, natural history and geology, and history and culture. The weight, color and clarity of amber are significant factors. The animal and plant matter trapped in the resin give clues to the history of fauna and flora of the region. Artifacts include jewelry, art, sculptures and household items. The museum is open 7 days a week, all year round, and there are guided tours. 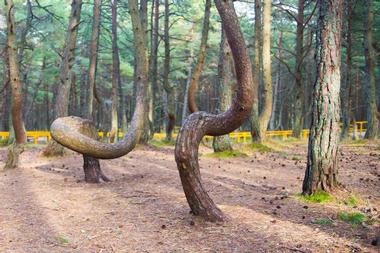 
The Dancing Forest, or Drunken Forest, as the locals call it, was planted in the 1960s to stabilize the Kruglaya Dune on the Curonian Spit, a sliver of land that divides the freshwater Curonian Lagoon from the salt water Baltic Sea. The limbs of the trees grow into circles, spirals and even knots. Theories abound about the cause of this behavior. Some think the wind is the reason, others the shifting sand. Some blame it on caterpillars and others say that it is an area where negative and positive energies collide. Locals believe that climbing through one of the knots adds a year to one's life. 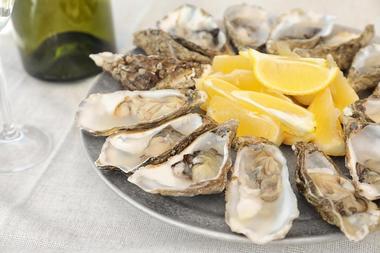 
This restaurant is situated on the first floor of the Skipper Hotel, about 100 meters from the Cathedral, on Kneiphof Island. The small upscale hotel is a replica of traditional half-timber German buildings of the Middle Ages and has 18 rooms. The main hall of the restaurant is elegant yet comfortable. The outdoor seating overlooks the Pregloya River. Russian and European cuisine is served for breakfast, brunch, lunch and supper. Seafood is a specialty, including fresh oysters and lobsters, kept live for the choosing. The bar is an excellent venue for a pre- or post-dinner drink. 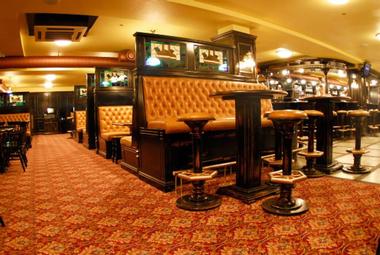 There is a large double-story sized glass beer mug above the entrance to this brewery. Beer is brewed on site, according to ancient recipes. There are usually four beers on offer, a dark pilsener, two lighter lagers and a seasonal brew, served with savory bar snacks. There is a set menu for lunch and an a la carte menu at other times. The portions are substantial. Sports events are shown on multiple screens. Entertainment may include a disco, a jazz ensemble, a pianist or a violinist. Pivovar is open daily, from noon to midnight. 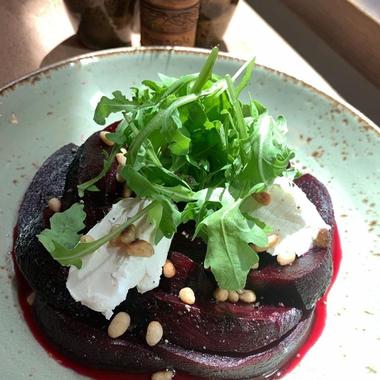 Borsch is a Ukrainian stew, typically made with beetroot which gives it a bright red appearance. Salo is the Ukrainian term for bacon lardons. This restaurant chain serves authentic Russian and Ukrainian cuisine in a themed, rustic setting with live music. They serve hearty meals with sourdough pancakes and strudels for dessert. Alcoholic drinks include beers, mulled wines, whiskeys and flavored brandies. Patrons can choose to dine in, have takeouts or phone for delivery. The restaurant is open from midday to midnight, during the week, and till 2 am on weekends. 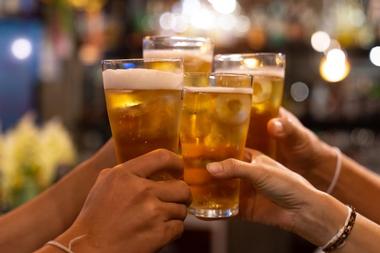 In Allgäu, Germany, the Zötler family has been brewing beer since 1447. It is the favored beer of this Bavarian-themed restaurant, near the Main Square in Kaliningrad. The waitresses wear traditional costumes and the interior décor is made from beer barrels. The German cuisine is sold in large portions. Bratwurst is imported from Nuremberg, its place of origin. Not surprisingly, the restaurant is popular with German tourists. It has three areas that seat up to 70 people. Flights of six beers are sold for tasting. Large screen televisions show Bundesliga and other sporting events. 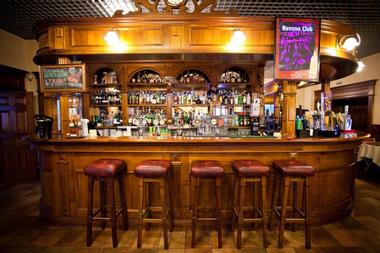 This chain of restaurants has an English pub theme. There are 20 draft beers to choose from as well as 30 malted and blended whiskeys. The cuisine is European and, in particular, English. They offer business lunches and cocktail hours. English Premier League football and other sporting channels are shown on large screens throughout the restaurants. Themed Bavarian, Irish and Russian parties can be arranged on request. The venue in Kaliningrad is set in a residential area and is popular with locals. It is a family-friendly venue and caters for children. 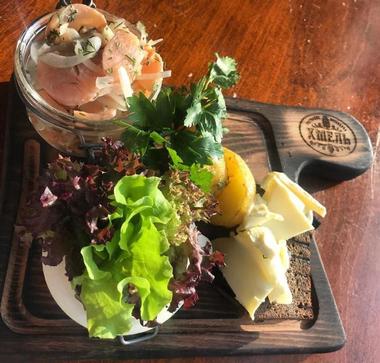 Khmel means 'Hops' in Russian. This beer restaurant has a strikingly modern, industrial décor. Bare brickwork serves as a backdrop to massive metal pipes. The bar is long and the restaurant seats 200 people in four different venues. Russian and Siberian dishes such as wild boar, venison, pies, sausage and dumplings are items on the menu. The mackerel is smoked in-house. There is a concise set menu offering combinations of soup, salad and a hot dish. Flights of beer are sold for tasting.

11 Best Things to Do in Kaliningrad, Russia

16 Best Things to Do in Aix-En-Provence, France

24 Best Things to Do in Zaragoza, Spain

24 Best Things to Do in Chisinau, Moldova