11 Best Things to Do in Hyderabad, India 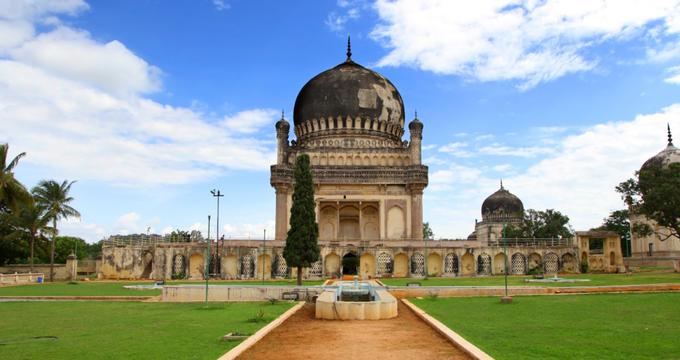 Hyderabad is home to 7 million people. It is the capital of the state of Telangana. It is situated on the River Musi, on the Deccan Plateau at a height of 542 m above sea level. The terrain is hilly with several artificial lakes. Because of the relatively mild climate Hyderabad was found suitable to be the Imperial capital during British Rule. It has benefited from colonial era industrialization and is a hub of research and development, manufacturing, education and finance. The second largest producer of motion pictures is based in the city. It is also known as 'The City of Pearls' because of the thriving pearl industry.

This landmark structure was built in 1591, on the east bank of the Musi river, out of gratitude for the cessation of a cholera outburst. The settlement was laid out around the mosque and today Charminar is in the center of the old part of Hyderabad. Charminar means 4 minarets or pillars. These are each 56m high and dominate the landscape, with bustling roads and markets all around them. There are four grand arches on the ground floor. The first floor is open to the public and offers views in all directions. The mosque is on the second floor. The monument is illuminated each evening from 7 to 9 pm. 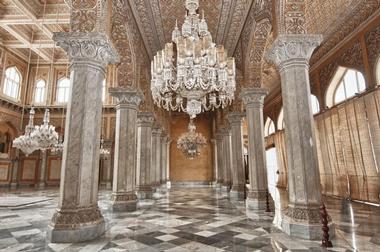 Chowmahalla is a complex of four palaces, built by the Nizam rulers to resemble the Shah of Iran's palace in Teheran. It is still owned by descendants of the dynasty. It was originally built on 45 acres of land and took from 1750 to 1860 to complete, incorporating several architectural styles. The palaces, two courtyards, a hall, the gardens and fountains remain. The interior is ornate and elegant, with large crystal chandeliers and marble finishes. The family has a collection of classic cars which are on display. In 2010, the palace was awarded UNESCO's Asia Pacific Award for conservation. 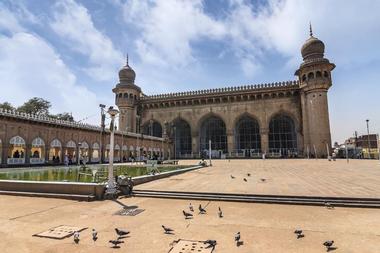 This mosque derives its name from the Grand Mosque in Mecca. It is believed that some of the bricks used in its construction came from the holy city. It is adjacent to Charminar in the old part of the city. It is the largest and most important mosque in Hyderabad and one of the largest in India, with the capacity to accommodate 10000 worshipers. All the Nizam rulers from 1803 have been entombed there. Local granite was used throughout and the two large columns were carved out of a single piece. The mosque is open from 4 am to 9:30 pm daily. 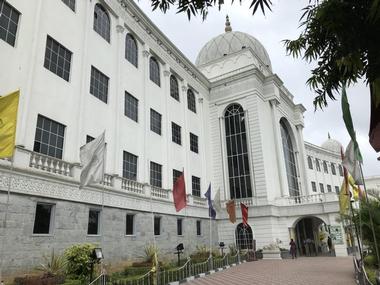 Salar Jung III devoted forty years of his life to the accumulation of Asian, Far Eastern and European art and artifacts. In 1951, subsequent generations established a museum in the family's ancient palace. In 1958, the entire collection and a library, containing rare manuscripts, were donated to the state for posterity. They were each declared Institutions of National Importance in 1961 and seven years later were moved to a custom-built complex. This was expanded in 2000. Among the artifacts are Roman statues, ivory chairs received from France, miniature paintings from India and a jewel-encrusted dagger and fruit knife. 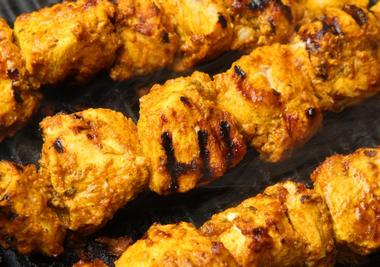 
There are four outlets of Barbeque Nation restaurants in Hyderabad. Although much of the food is grilled on demand, there is also a buffet option and a range of curries to choose from. Many exotic seafoods feature on the menu including octopus, squid, eel and crab. Meat dishes include mutton, chicken, duck and rabbit. In addition, there is a vast array of vegetarian dishes. The dessert menu does not disappoint with several tropical fruits, ice cream and baked pies, brownies and cakes. Children under six eat for free. Alcohol is served. 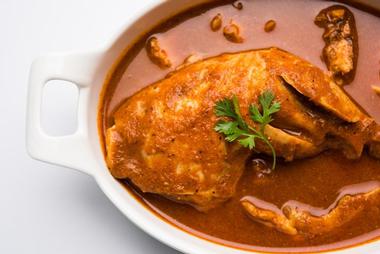 
There are 17 outlets of Paradise in Hyderabad. The restaurant chain had a humble beginning, starting as a canteen and café in a cinema complex in 1953. That restaurant expanded outwards and upwards until 2004 when it was decided to replicate the outlet. Paradise claims to serve the world's favorite biryani and holds the Limca record for serving the most biryani in one year. There are 20 kinds of kebabs available, as well as curries, Chinese food and Indian breads. Non-alcoholic beverages are served. Patrons can choose to dine at the restaurant, order takeouts or ask for delivery. 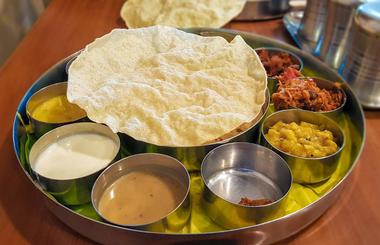 Dakshin offers luxury dining in an elegant hotel, in the commercial district of Hyderabad. It is one of several refreshment centers in the ITC Kaktiya Hotel. The hotel has almost 200 rooms, conference facilities, a banquet hall and a wellness center. Pastries and hot beverages can be enjoyed in the lobby or the 24-hour coffee shop. Cocktails and other alcoholic drinks are served in the Marco Polo bar on the ground floor and the Towers Lounge on the 16th floor. The Dakshin welcomes guests with flowers and meals take the form of a spread of curries, side dishes, pickles, chutneys, pilau and fried breads. 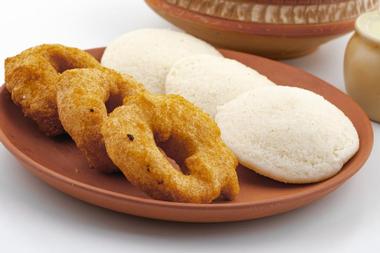 This chain of restaurants has been producing Asian cuisine since 1987. There are three outlets in Hyderabad, serving South Indian snacks all day long. These include sandwiches, soups, salads and stir-fries. The main courses include Marsala, Paneers, Kormas and other curries, accompanied by rice, naans, rotis or papadoms. Chinese food is also on the menu. Hot desserts, sundaes and ice-cream round off the meal and hot and cold, non-alcoholic beverages are served. Minerva can cater for 100 to 5000 people, at banquets, weddings and outdoor functions. 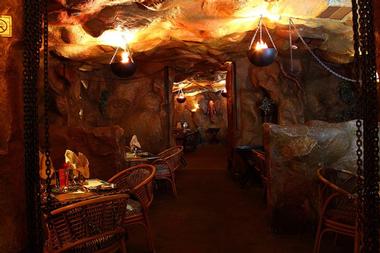 Ravi Ohri started this enterprise in 1976. After completing an MBA specializing in Hotel Management, his son ,Amar Ohri joined him. They have established a chain of 22 restaurants and three hotels in just over 40 years. Thirteen of the restaurants are in Hyderabad. The restaurants have distinct personalities but are governed by the same systems and values. There are broad categories of restaurants offering Chinese, Continental, North Indian and Multi-cuisines. There is also a street food concept model. Ohri's seeks to offer their customers a vast range of experiences from traditional to quirky, lavish to downtown and romantic to historic. 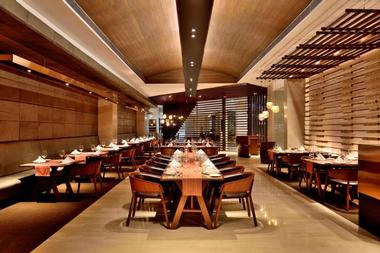 This award-winning restaurant offers modern, North Indian cuisine in a high tech setting. It is situated in the Westin Hyderabad Mindspace Hotel, in the city's center. The jewel-like meals are set off by thousands of bangles that characterize the décor. The bangles are produced by a craftsman working on an open fire in the restaurant. They are used, en masse, to decorate the walls and even to divide the bar from the dining area. The restaurant is close to the Raheja Mindspace IT Park, Hitech City and the Hyderabad International Convention Center. It is a popular venue for those in the city's thriving technology industry. 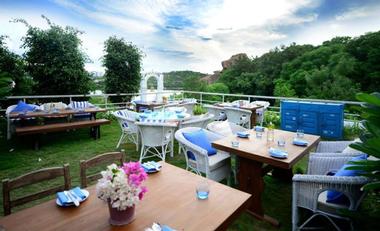 Olive Bistro is one of a chain of high end restaurants in India, characterized by white walls and furnishings. In Hyderabad, the restaurant is in a tranquil setting, next to a 'secret' lake in Jubilee Hills. It has won awards for Best European Restaurant, its ambiance and the Sunday brunch. Chef Viraf Patel was trained in Europe before returning home. Menu items include pastas, roast chicken and poached fish. Gluten-free, vegetarian and vegan options are plentiful. Each week there are Cocktail Nights, Lovestruck Wednesdays and Sunday Sundowners. The restaurant is open from noon to 3 pm and from 7 pm to midnight on Monday to Friday.

11 Best Things to Do in Hyderabad, India

14 Best Things to Do in Hamilton, New Zealand

25 Best Things to Do in Laos