10 Best Things to Do in Cordoba, Argentina 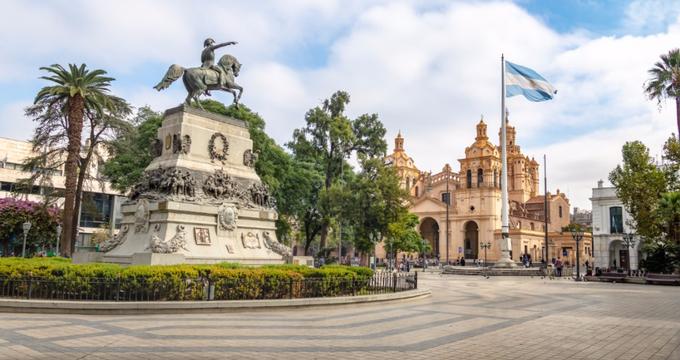 Cordoba, the city is the capital of the Cordoba Province. It was founded in 1573 and named after Cordoba in Spain. It is situated on the Suquia River, in the geographical center of Argentina. The National University of Cordoba is the oldest in the country. It was founded by Jesuits. In 2000, the Jesuit Block, a cluster of 17th century buildings, was declared a World Heritage Site. There are large open, green spaces in the city, several museums and open air arts and crafts markets. Outside of the city, there are quaint villages with interesting histories and annual festivals. 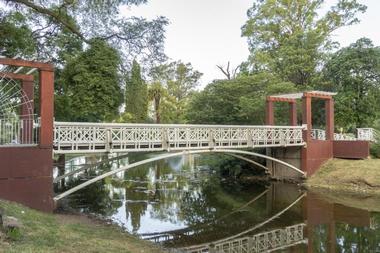 Late in the 19th Century, the rapidly growing city of Cordoba needed an open, green space. It took from 1890 to 1911 to create the 70 hectare park which was named after former President Domingo Sarmiento. It is the largest open space in Cordoba and close to the heart of the city center. The shade from its enormous trees create a welcome refuge in summer. Rose gardens, water features and an amphitheatre with 2000 seats, developed at its inception, are still in existence. The park houses the zoo and duck lake, benches and sculptures. There are miles of cycling tracks and facilities for 10 other sports. 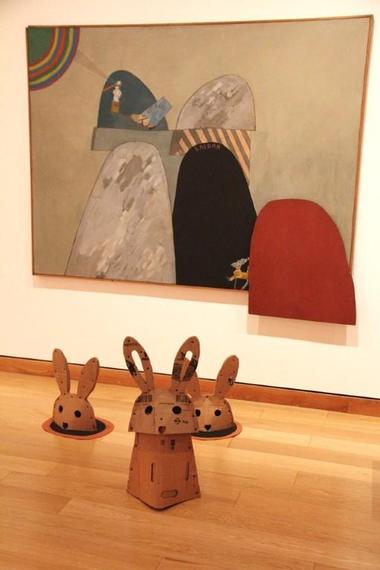 Between 1912 and 1916, Dr Martin Ferreyra, a physician and owner of limestone quarries, built his mansion facing onto Sarmiento Park. Subsequent owners made alterations to the structure. A striking feature is the central hall which is 20 meters high. In 2005, it was expropriated for the purposes of creating a fine arts museum and named after Evita Peron, wife of former President Juan Peron. The museum owns over 500 works done by artists of the Province of Cordoba. There are 12 permanent and several temporary exhibitions, a library and an auditorium which seats 2000 people. 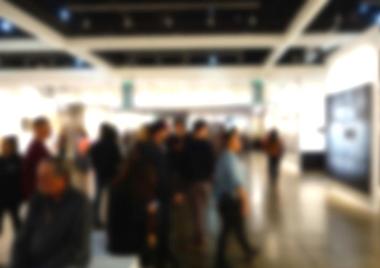 This museum which also faces onto Sarmiento Park was established in 1915 as the Provincial Fine Arts Museum. In 1950 it was renamed after Emilio Caraffa, a local artist. The neoclassical building houses 1500 square meters of museum display area. There are 1100 works of artists from the late 19th century to the present day, displayed in permanent and temporary exhibitions. The archive holds files of artists, records of their works, previous exhibitions and documentaries. There is also a reference library and a store which sells books, catalogs and memorabilia. Education outreaches include tours, creative workshops and conversations with artists. 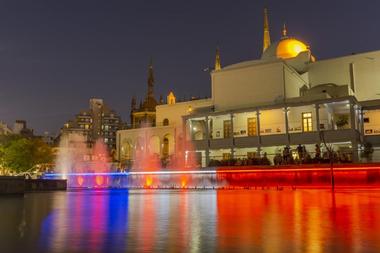 The 10000 square meter space that is now occupied by an open air shopping gallery was once a women's prison. It was a drab structure, built in 1906. A Greek style chapel was attached to it and Emilio Caraffa and other artists decorated the chapel's interior walls with frescoes. The prison was closed in 1977 and demolished in 2005. The chapel and cloisters were retained as an arts center. Shops, bars and restaurants were built on the ruins of the prison. Large fountains occupy much of the open space. Live, open-air musical performances, puppet shows and dancing showcase emerging talent. 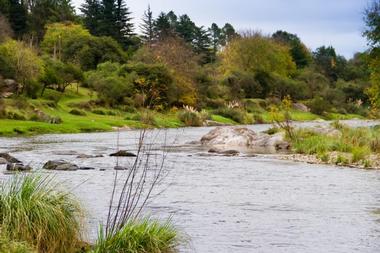 
In 1979, 114 ha of land, bounded by the Suquia River and South Master Canal, in northwest Cordoba was set aside for recreational use. It was known as The San Martin Park. In 2009, it was upgraded to a reserve. It is the only protected area in the city. There are two zones to the reserve. The former river bed, where camping is permitted, is the high impact zone. There are facilities for various sporting activities, a swimming pool and a picnic area. The conservation area has been set aside for environmental education and research.

6.The Church of the Sacred Heart of Jesus 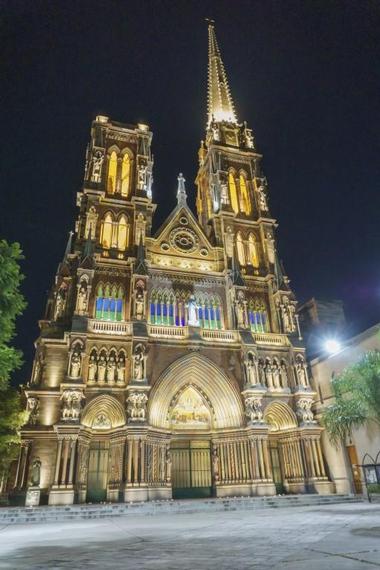 
Otherwise known as the Capuchin Church, this large, Neo Gothic church was built by the Franciscan Order between 1926 and 1934. It has been awarded the status of First Artificial Wonder of the World. There are an array of colorful and symbolic elements to the structure. The 70 m high tower represents the soul that ascends and its neighbor, the truncated tower, the matter that dies. There are numerous statues and columns made with various twists and colors. Inside, the painted vaults in the ceiling have many themes. Francis of Assissi is depicted in the artwork and stained glass window. 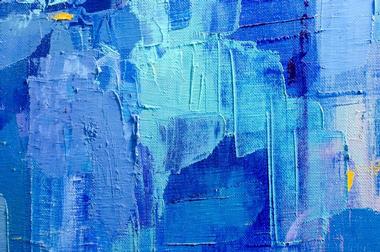 For the past thirty years and more there has been a street market between the canal and San Juan Boulevard. The area has several Art Deco buildings from the 1930s. The stalls sell an endless variety of locally handcrafted goods, most of which are exclusive to the market. There are antiques, used books, clothing and artwork for sale. Restaurants, bars and coffee shops can be found along the route. There is usually live entertainment such as circus acts, musical performances or puppet shows in the pedestrian thoroughfare. The market opens from 5-11 pm on weekends. 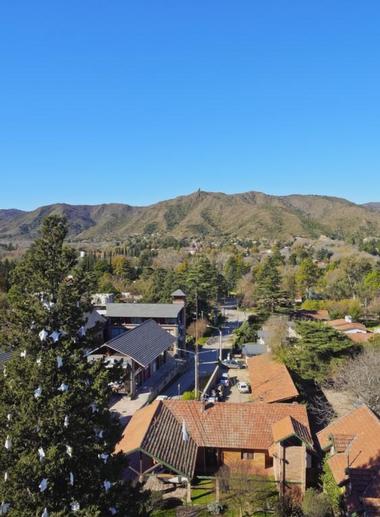 This small mountainous village is named after the designer of the Argentinian flag. In 1930 Germans were attracted to the Alpine feel of the land and settled in the area. In the 1940s several stranded German seamen joined them. They erected Bavarian style dwellings on the hill slopes. They started manufacturing German delicacies such as apple strudel, leberwurst, spätzle, and of course, beer. They opened micro breweries, patisseries and chocolate shops. The Oktoberfest is the third most notable in the world, after Munich and Blumenau in Brazil. There are German church services and newspapers, and traditions kept in this village that have been forgotten in Germany. 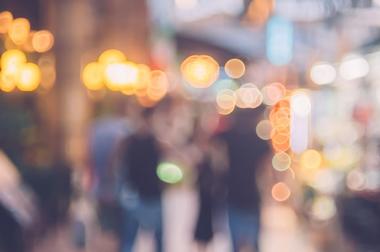 A short distance from Cordoba, on the banks of the Cosquin River, at the foot of the mountain, lies Cosquin, the oldest town in the Punilla Valley. It has a moderate climate, conducive to the treatment of tuberculosis. In 1900, a physician from Buenos Aires recognized its potential and established a sanitarium in the town. People from across the country were sent there to recuperate. In the 1940s, a cure was found for the disease and patients stopped coming. Due to the focus on, and the stigma of, TB, tourism was not developed. Since 1961, however the town has played host to the National Folklore Festival. 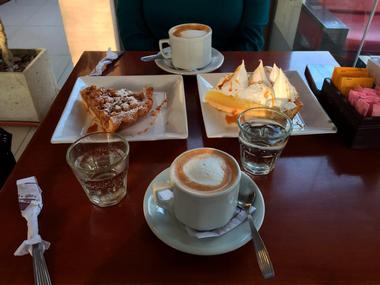 Caseratto franchise stores have been selling artisan ice cream in Cordoba for more than 20 years. There are three types of Caseratto franchises, namely an ice cream parlor, a cafetaria and a bakery, all with a delivery service and online sales. The confectionery can be described as cakes, desserts and 'small temptations'. There are more than 70 flavors of ice creams, available in caramel, chocolate, creamy and sorbet. Savory menu items include baguettes, sandwiches, quiches, salads and a variety of cooked breakfasts. Coffees, with or without a dash of liqueur, and cool drinks are available at the cafetaria.

10 Best Things to Do in Cordoba, Argentina

Best Things to Do in Tangier, Morocco