14 Best Things to Do in Bondi Beach, Sydney, Australia 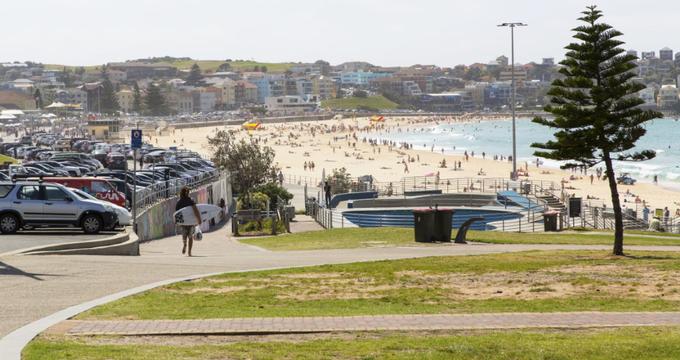 Bondi is the name attached to Sydney's world-famous beach and the adjacent suburb. The name is derived from the aboriginal word, 'boondi', meaning surf. In 1851, Edward Hall and his father-in-law purchased 200 acres of land in the area, including almost the entire beach. In 1882, the beach was opened to the public and the tramway arrived two years later. The suburb was occupied by working-class immigrants for much of the 19th and 20th century but has recently been gentrified. Since 1907, there has been contention over public decency and a 'dress' code at the beach. After World War Two, officials' duties included measuring bikinis. Since the 1980s, topless bathing has become commonplace at the southern end. CDC information for travelers. Hours/availability may have changed.

Brenda Miley, former surfing champion, started this company from the back of her minivan in the Bondi Beach parking lot, in 1995. Her aim was to encourage more women to surf. In 1998, she opened a shop which sells and hires surfboards and related equipment. The company offers surfing lessons and beach tours at Bondi Beach, Byron Bay and Maroubra and has taught people from all corners of the globe. Its motto is “Changing lives, one wave at a time”. Brenda and her team offer pro bono programs such as Kids at Risk, Waves of Wellness and Silver Surfers, for senior citizens. The initiative has received countless awards. 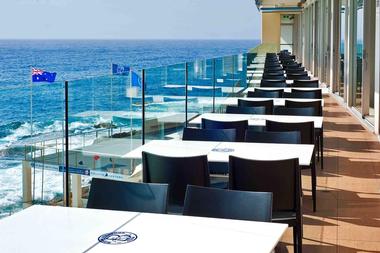 This swimming club was started in 1929 by lifesavers who wished to remain fit during winter. The 15B rule for membership requires candidates to compete for three out of four Sundays per month, for five years, in order to qualify. The club started in a tin shed and was upgraded to a bar and poker venue in 1960. It is the only swimming club in the world to hold a liquor licence. The current multi-story venue includes a 200 seat restaurant which overlooks the beach and the 50m tidal pool where members compete. There is also a sauna, shop and museum on the premises. 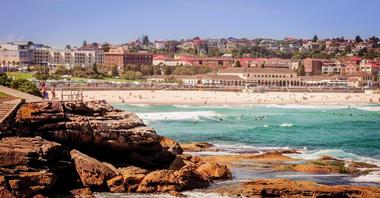 The pavilion was originally instituted to combat public indecency. Bathers, particularly men, were changing into their swimwear in the open. In 1911, rudimentary 'surf sheds' were erected. By 1928, peak daily attendance had reached 60000 and a more robust structure was needed. The Pavilion comprised Turkish baths, a ballroom, shops, a gymnasium and the Esplanade restaurant and cabaret venue. During World War Two, Bondi Beach was considered to be an invasion point and the entrance was demolished. In 1996, the building was declared a heritage site. It was subsequently refurbished and is now a community arts center, housing theaters, studios and shops.

You are reading "14 Best Things to Do in Bondi Beach, Sydney, Australia" Back to Top 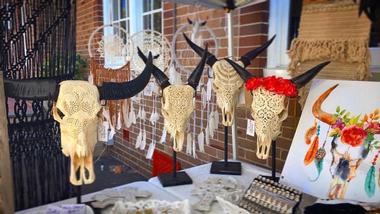 The weekend markets can be found in the grounds of the Bondi Beach Public School, close to the beach. Bondi Farmers' Market opens on a Saturday and sells fresh produce, nuts and seeds, organic and vegan food, cold-press coffee and other food-related products. Visitors can eat at the Field to Feast Table or organize their own picnic on the grounds. Food is also sold on Sundays, along with clothing, jewelry, art, retro chic furniture and vintage collectibles. The market is not large, leaving plenty of time to enjoy other attractions in the area. It is open from 10 am to 4 pm. 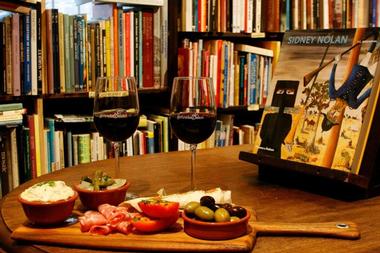 
'Gertrude and Alice' refers to the author Gertrude Stein and Alice B. Toklas, her lifelong companion and muse. After Gertrude's death, Alice published her memoirs in the guise of a cookbook. Some of her recipes are used at the café. The bookshop was started in an old surf shop, with a stock of 40000 second-hand books. It now sells new and used, fiction, non-fiction and collectible books. It is a gathering place where writers, readers, actors and artists can eat, drink, read and attend literary and musical events. The shop has appeared in several films, commercials and photo shoots. 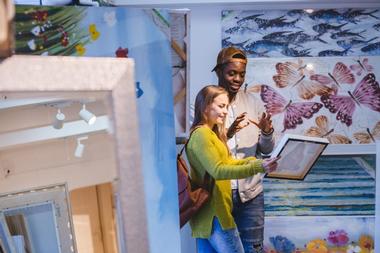 
Cooee Art Gallery is a the oldest marketplace for Aboriginal art in Australia. It was founded by Adrian Newstead in 1981. He subsequently wrote a book about his experiences entitled, 'The Dealer is the Devil'. The gallery has handled more than 3000 paintings, sculptures, limited edition prints, desert boards and handcrafted items, representing 150 artists. Each item is accompanied by a profile of the artist. More than 400 solo and thematic exhibitions have been held at the gallery. Cooee also does valuations, schedules auctions, generates secondary sales of works of art and offers advice and consultancy.

You are reading "14 Best Things to Do in Bondi Beach, Sydney, Australia" Back to Top

In the 1970s and 80s, graffiti became an illicit art form as youth experimented with spray paint in public places. The cost of removing the offending images was $400000 per annum. In the late 1980s the first graffiti wall in Bondi was sanctioned in order to channel the young artists' energies. Space was allotted based on merit and experts in the field offered training in spray paint art and techniques. More space was made available and the cleaning bill for removing illicit graffiti dropped to $60000. Initially, words and phrases were popular but recently, images worthy of selfies and Instagram have started trending. 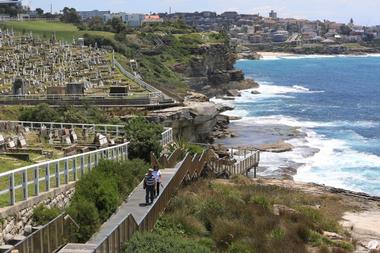 This urban, coastal walk is 6 km long and is rated as medium difficulty. It is steep in places and makes use of stairways. The walk also meanders through and along cliffs and offers spectacular, panoramic views of the beach, the bay and rock pools. There are several opportunities for stops along the way, including parks, hotels, restaurants, cafés and picnic shelters. There are play areas, changing rooms and toilet facilities available for public use. The walk passes through Tamarama and Bronte beaches and takes approximately two hours. Getting to Maroubra Beach will take another 90 minutes.

9.Sculptures by the Sea 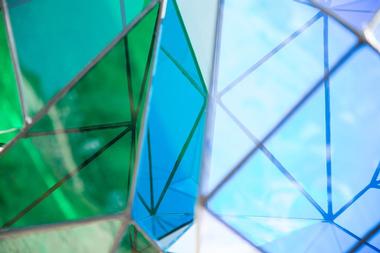 David Handley is the founder and director of this initiative. He was inspired by Opera in the Park, Symphony under the Stars and a sculpture exhibition in Prague, to offer a free public sculpture exhibition in Sydney. The 2 km long sculpture park is open annually for three weeks during October and November. More than 100 sculptures, created by Australian and international artists, are exhibited and offered for sale. Various routes, including a Tactile Tour, have been mapped out to cater for the public's varying degrees of mobility and special needs. An online shop sells branded merchandise, calendars and catalogs of the artworks. The exhibition moves to Perth's Cottlesloe beach in March each year. 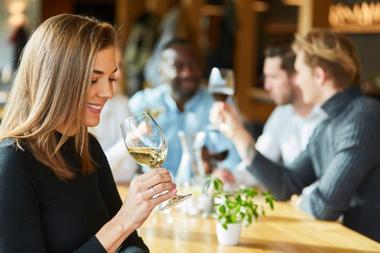 Owner chef, Sean Moran, started this restaurant in 1993. It offers Australian comfort food in a beachfront setting. The iconic blackboard menu lists four entrees, main courses and desserts each day. There is also a 5-course chef's special menu option and a selection of Australian wines to choose from. Seating is available in the restaurant, in the cocktail bar or outdoors. The coastal café atmosphere belies a fine dining experience. Sean splits his time between Bondi and the Bilpin farm restaurant in the Blue Mountains, where many of his ingredients are sourced. The restaurant is open for lunch from Friday to Sunday and dinner from Wednesday to Saturday. 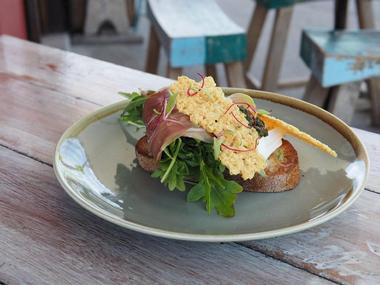 The Depot was started, as a hole in the wall café at the north end of Bondi Beach, in 2007 by YouTube chef, Guy Turland. Guy's food channel, Bondi Harvest, has become an international success and he has opened a second restaurant by that name in Santa Monica. His sister, Heather, a commonwealth gold medal marathon runner, now owns the café. Her son, Clint, is the chef. They serve simple, everyday food, focusing on breakfast, an important meal at the beach. They source many of their ingredients from their own southern highlands farm and have established a community herb garden next to the café. 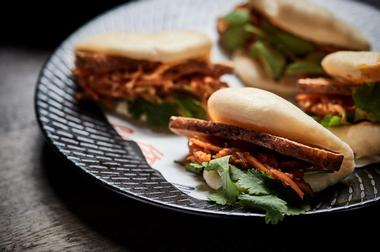 The China Diner offers Asian cuisine in a stylish, relaxed setting, minutes from the beach. There are traditional and modern dishes on the various menus. The décor at the front of the restaurant is reminiscent of Shanghai in the 1930s whereas the cocktail bar is more modern and makes liberal use of neon lights. Diners can choose to sit down to eat, or order take-outs for pick-up or home delivery. The entire establishment or parts thereof can be hired for private and corporate functions. There are four set menu options for groups and up to 200 people can be accommodated. 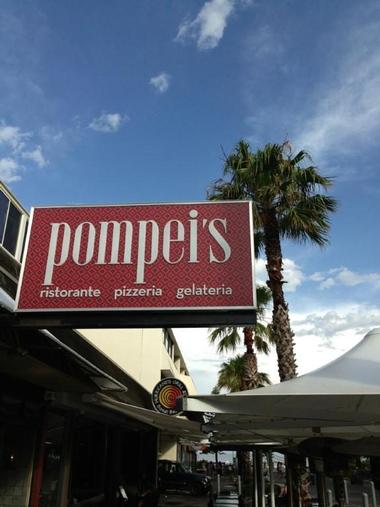 Giorgio, the owner of Pompei's, immigrated to Australia in the late 1990s. On the eve of the millennium, he opened this pizzeria cum trattoria. He uses his mother's and grandmother's recipes for his handcrafted Italian pastas and other signature dishes. The pizza dough is made from stoneground flour and allowed to rest for 48 hours before being used. The main dining room has a fresh, marine look whereas the paneled dining area is reminiscent of Italy. There is an additional al fresco, street-side dining option. The gelato and sorbetto desserts are all home-made using only natural ingredients. Fruit flavors differ with the seasons. 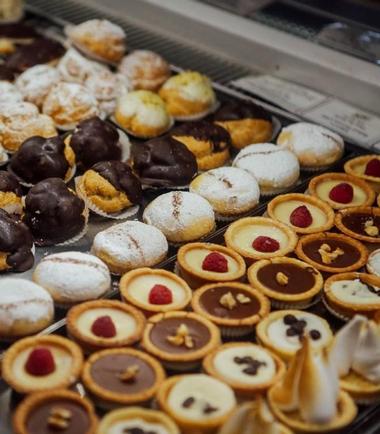 In 1987, Savatore Papa visited Australia and saw a gap in the market for authentic Italian flavors. The large Bondi pasticceria comprises a café, patisserie, delicatessen, gelato stand and cocktail bar. Cakes, sweets and biscuits are on display and custom cakes can be ordered. The savory menu includes pizzas, pastas and filled paninis and focaccias. The ricotta cheesecake is the café's signature dish but there are many more desserts to sample. Seating is available indoors and outdoors. Papas has three locations in Sydney and wholesales their products through several outlets.

14 Best Things to Do in Bondi Beach, Sydney, Australia

You are reading "14 Best Things to Do in Bondi Beach, Sydney, Australia " Back to Top