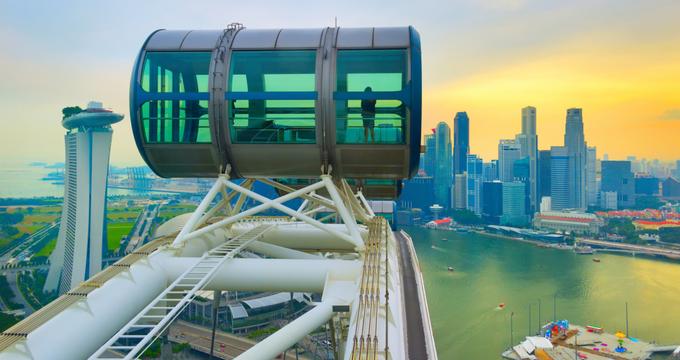 Though the ride’s origins can be traced back to the pleasure wheel attractions of 17th century Bulgaria, the world’s first observation wheel was designed by George Washington Gale Ferris Jr. as the centerpiece of the 1893 Chicago World’s Fair. Since then, Ferris wheels have become a staple of amusement parks and fairs throughout the world. In the 21st century, the Ferris wheel has experienced a revival as a landmark urban attraction since the opening of the London Eye in 2000. These modern observation wheels take riders to the highest heights, with many offering luxury amenities and nearby retail and dining experiences. 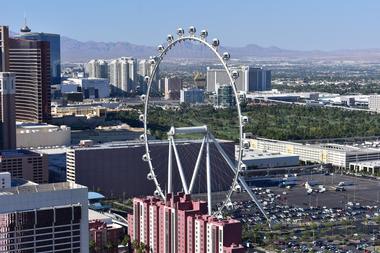 The High Roller, opened in March 2014, is currently the world’s tallest observation wheel, reaching unprecedented heights of 550 feet. The ride, which was designed by Arup Engineering, is operated as part of The LINQ Hotel and Casino in Las Vegas and offers unparalleled panoramic views of the famous Vegas Strip. Twenty-eight climate-controlled cabins accommodate 40 passengers for 30-minute revolutions and offer amenities such as flat-screen televisions and iPod docks. At night, the High Roller becomes one of the Strip’s most impressive attractions thanks to its state-of-the-art LED system, which illuminates the wheel with colorful custom displays. For a VIP ride, the Happy Half Hour rides offer an in-cabin open bar experience with a personal bartender. 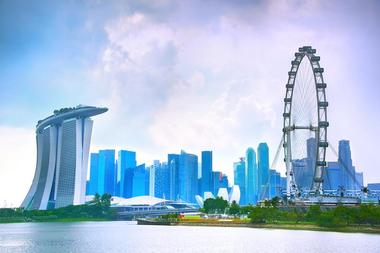 The Singapore Flyer is the largest observation wheel in Asia, reaching a maximum height of 541 feet. Opened in April of 2008, the wheel is located along Marina Promenade and offers spectacular views of the attractions of nearby Marina Bay. Each climate-controlled capsule holds 28 passengers and presents unique FLYER 360+ multimedia experiences highlighting area history and landmarks. Post-ride experiences are offered at the wheel’s Journey of Dreams exhibit, located within the Singapore Flyer Retail Terminal, which is also home to an indoor Rainforest Discovery exhibit, a flight simulator ride, and shopping and dining options. VIP ride upgrade experiences include Singapore Sling cocktail flights, four-course menu dining flights, and premium Champagne flights with express boarding and complimentary chocolates. 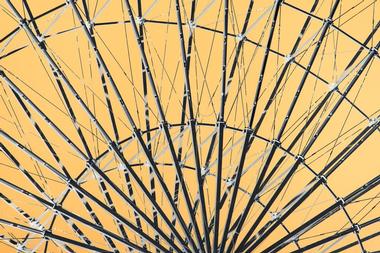 China’s largest observation wheel, the Star of Nanchang, opened in May 2006 and stands 525 feet tall. The wheel is located in Nanchang’s Ganjiang People’s Park and is designed with 60 enclosed capsules to mimic the minutes on a clock. All climate-controlled capsules hold eight passengers and offer fully modernized ride experiences during 30-minute revolutions, including in-capsule LCD televisions and advanced safety features. An integrated SMS system also allows riders and observers to broadcast custom 12-word messages on the wheel’s 7,000-light LED system. After the ride, visitors may enjoy complimentary admission to the surrounding Star of Nanchang Amusement Park, which offers high thrills aboard a steel coaster, a giant pendulum ride, and other family amusements. 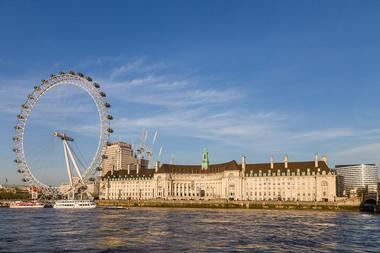 The London Eye’s March 2000 public opening is credited with inspiring the current revival of observation wheels as landmark urban attractions and it has since become a pop culture icon throughout the world. As Europe’s tallest observation wheel, the London Eye reaches heights of 443 feet above the River Thames and was designed to evoke the 1895 Great Wheel, constructed for the Empire of India Exhibition. The A-frame cantilevered observation wheel is the most popular commercial attraction in the United Kingdom, taking more than 3.75 annual million riders on half-hour revolutions within 32 climate-controlled ovoidal capsules. Fast track boarding and VIP ride experiences are available, along with a wide variety of public programming aboard capsules, including school discovery workshops, yoga and barre classes, and comedy performances. 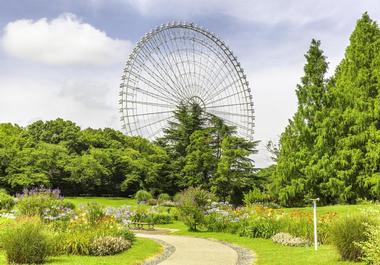 
The Redhorse Osaka Wheel is the centerpiece of Lalaport EXPOCITY, a multipurpose retail and entertainment facility in Suita City, Osaka, constructed for the 1970 Japan World Exposition. Standing at a height of 403 feet, the wheel surpasses Japan’s previous observation wheel recordholder, the Sky Dream Fukuoka, by 13 feet. Seventy-two climate-controlled gondolas feature fully glassed-in floors, simulating the feeling of soaring through the air above the Osaka skyline. Two VIP gondolas are available for an upgraded ride experience, offering special seating and interior lighting features. After the 18-minute ride’s completion, visitors can spend the day exploring the other attractions of EXPOCITY, which include the Tower of the Sun, the Nifrel Aquarium, a Pokémon Expo Gym, and the 109 Cinemas Osaka IMAX Theatre. 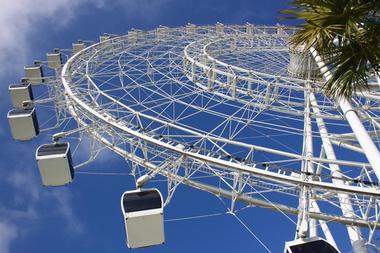 
The 400-foot Orlando Eye was opened to the public in May 2015 and is operated by Merlin Entertainments as a sister wheel to the London Eye. The wheel’s 30 climate-controlled capsules utilize a state-of-the-art rotation system that offers a smooth, stable ride experience throughout each 23-minute rotation. A full LED lighting system illuminates the wheel at night, with custom displays showcased regularly in honor of national holidays and observance months. It serves as the centerpiece of the ICON Orlando™ 360 entertainment complex, which also offers thrills aboard the StarFlyer giant swing ride and the 7D Dark Ride Adventure. After the ride, visitors can see international marine life at the SEA LFE Orlando Aquarium, spot celebrities at Madame Tussauds wax museum, and explore specimens at the SKELETONS: Museum of Osteology. Live entertainment is also offered at the dining and nightlife venues, including Tin Roof and iLounge Istanbul. 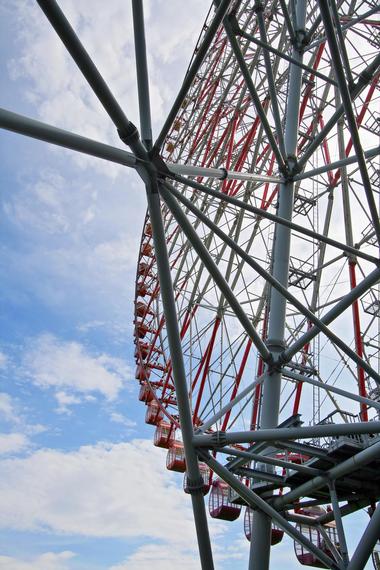 The Sky Dream was originally constructed as Sky Dream Fukuoka, which operated as Japan’s tallest observation wheel until 2009. In 2011, the wheel was relocated to Taiwan’s Lihpao Land theme park in Taichung, which also boasts the world’s only 90-degree drop tilt coaster, Gravity Max. Standing 394 feet above the attractions of Lihpao Land, Sky Dream is the country’s tallest observation wheel and offers dramatic views that have been compared to the famous Taipei 101 skyscraper observation deck. Thirty-minute ride experiences are offered within climate-controlled capsules, which feature USB and Wi-Fi hookups for easy social media sharing of on-ride photos and video. After the ride, visitors can experience a full day of fun at Lihpao Land, which is also home to the Mala Bay Water Park and an outlet mall center with a wide variety of shopping and dining options. 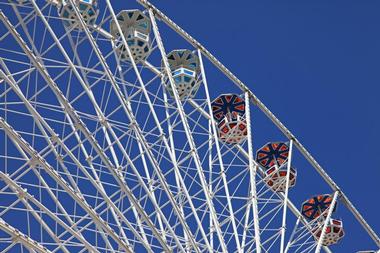 The 390-foot Zhengzhou Ferris Wheel is the centerpiece of Henan’s Century Amusement Park and shares the honor of the title of China’s second-tallest observation wheel with the Changsha Ferris Wheel, Suzhou Ferris Wheel, and Tianjin Eye. Following its public opening in 2003, the wheel was second in height only to the London Eye. The wheel’s spokes are designed to evoke the shape of a star when it is lit at night with a full LED lighting system. Each ride revolution lasts approximately half an hour, with 48 climate-controlled cabins seating eight passengers for an hourly capacity of 768. After the ride, the thrills continue on more than 30 rides throughout the park, including several suspended and inverted steel roller coasters. Unique reconstructions of national and international cultural attractions are also displayed throughout the park, including a replica Great Sphinx and antique Chinese steam locomotives. 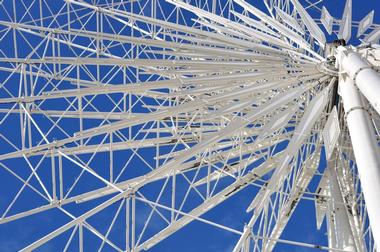 Changsha Ferris Wheel is one of four Chinese observation wheels to hit the 390-foot mark, sharing the distinction with the Zhengzhou Ferris Wheel, the Suzhou Ferris Wheel, and the Tianjin Eye. The ride has operated since October 2004 and is located adjacent to Changsha’s Helong Stadium, offering dramatic views of the city’s downtown skyline. Forty-eight climate-controlled cabins seat eight passengers apiece, for a total seating capacity of 384 aboard each 20-minute ride revolution. Following the ride, visitors can grab a bite at several restaurants and cafés located within the wheel’s entertainment center, which is also home to a variety of retail and souvenir outlets. 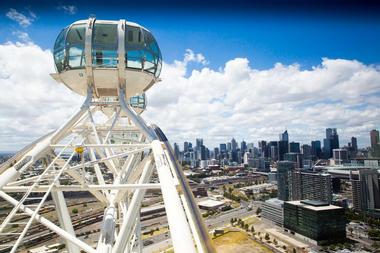 The Melbourne Star is the only giant observation wheel in the Southern Hemisphere, standing at a height of 394 feet. The wheel, which was designed by the Japanese amusement corporation Sanoyas, features seven spokes, which are meant to evoke the Australian flag’s seven-point star. Following its 2008 opening, the ride was closed several times for structural updates and today features state-of-the-art safety features to ensure a comfortable and secure rider experience. Each rider capsule offers in-cabin audio tours and unparalleled 360-degree views of attractions up to 25 miles away, including Port Phillip Bay, Mount Macedon, and the Dandenong Ranges. VIP ride experiences include the Sparkling Flights with complimentary beverage and the Sights and Lights combination day-night ride passes. Combination passes are also available for visitors to experience the other attractions of Waterfront City’s Docklands precinct, including the nearby O’Brien Group Arena ice skating rink.

17 Best Things to Do in Reykjavik, Iceland

25 Best Places to Visit on Thanksgiving