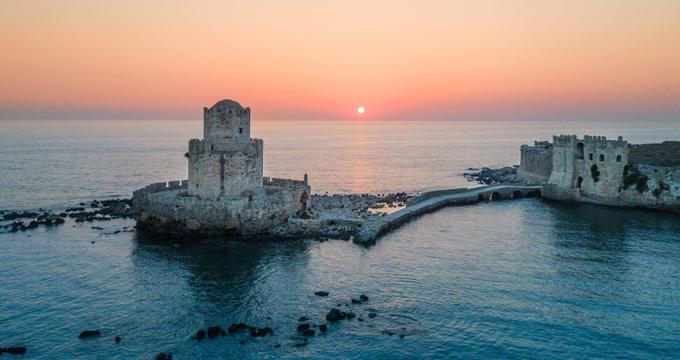 Archaeology and antiquity buffs can gain a better understanding of the complex history of Greece by exploring the castles, or in some cases, ruins of castles, that dot the different islands. Over the years, the structures fell under the ownership of whatever people were occupying the area at the time from the Byzantines to the Franks, Venetians, Ottomans and the Greeks. While every castle is different, all are impressive in their construction, exterior beauty, and the surrounding scenery.


1.The Fortress of Kavala 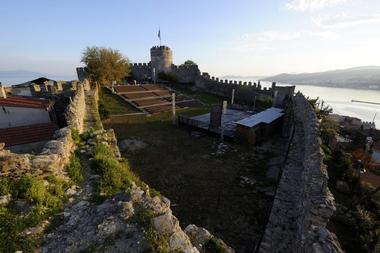 Set on the top of Panagia peninsula in the old town, the Fortress of Kavala, also known as Castle Kevala and the Acropolis of Kavala, is a 15th-century castle that has become synonymous with the city by the sea. Today, visitors to the fortification can see several points of interest including the central circular tower which offers panoramic views of the surrounding area, the arsenal and food storage that was later converted to a prison in the 18th century, the cistern, and the guardhouse. On-site, there is a modern open-air theatre that hosts a variety of events throughout the year from plays to musical performances and more.

2.Palace of the Grand Master of the Knights of Rhodes 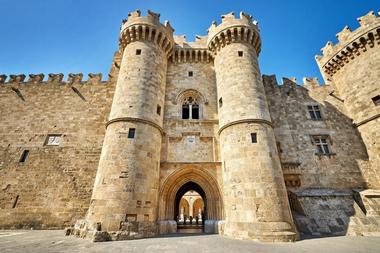 Once a medieval castle and now a museum, the Palace of the Grand Masters of the Knights of Rhodes has a fascinating history. Set on the site of a seventh-century Byzantine fortress at the highest point of the Greek island of Rhodes in Old Town, the 14th century Gothic structure served as the former home of the head of the Knights of Saint John, and has gone through surviving an explosion in 1856 to being the summer home of King Victor Emmanuel III and the former Italian Prime Minister Benito Mussolini. Now the palace is a magnificent museum highlighting Rhodes history and features paintings, artifacts, weapons, and books. 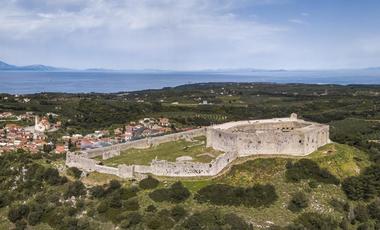 Boasting views of the Ionian Sea and the plain of Elis, Chlemoutsi Castle, also known as Chateau Clermont and Castel Tornese, was built in 1220-1223 under the direction of Prince Geoffrey I Villehardouin. Later, it would become an important structure in Achaia, a Frankish principate, where it became the strongest fortress during that time. Over the years, the castle was occupied by the Greeks, Venetians, and Turks. Today, it remains as a fine example of Frankish era fortress architecture in Peloponnese. Visitors can learn more about it by visiting the museum located in the courtyard.

On the northeast corner of the acropolis of Thessaloniki sits Eptapyrgio, a Byzantine and Ottoman-era fortress. Translated in Greek, its name means seven towers, although there are ten towers. Experts say that the five northern towers more than likely date back to the days when emperor Theodosius I was in power, around 379-395 BC, while the southern part of the castle is likely from the 12th century. The castle has experienced an interesting past from being captured in 1430 by the Turks to being used as a prison in the late 19th century. 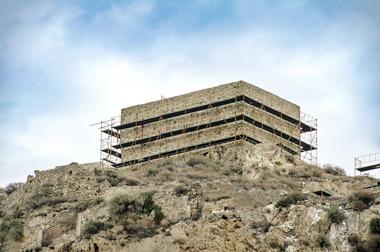 
After being closed for 18 years due to renovation as a result of damage sustained from an earthquake, the Castle of Skyros just recently opened to the public July 2019. Along with admiring the structure from afar, visitors can have a closer glimpse by viewing it from the nearby courtyard. Architecturally, the structure’s fort features four semicircular towers, as well as three water cisterns inside most likely built during the Venetian occupation. Other notable features include the St. George Monastery, which dates back to 963 AD and the temple of Episkopi, built in 895 AD.


Set close to the center of the old town of Rethymnon, the Fortezza is a centuries-old fortification built during Venetian times during the 16th century before being taken over during Turkish occupation. At the turn of the 20th century, there were even residential buildings inside. Fast forward to modern times, and from its location, visitors can enjoy views of the town below as well as of the coast. Travelers wishing to tour the archaeological site may access it from the alleys of Rethymnon old town or the coast road. Highlights include the east gate, artillery magazine, the mosque, and more.

As the main attraction of Nafpaktos, the Castle of Lepanto, more commonly referred to today as the Castle of Nafpaktos, sits on top of the hill shaped like a pyramid and overlooks the city. A symbol of ancient times, the grandiose Venetian structure is surrounded by a circular wall and has other features. Many people consider the well-preserved castles as one of the most beautiful in Greece. 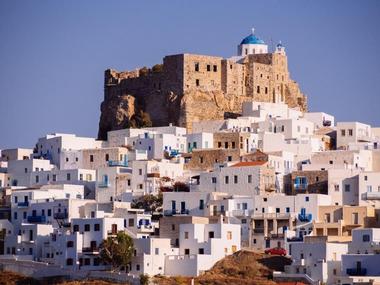 Founded in 1413 by a Venetian official by the name of Giovanni Querini, the Castle of Astypalaia sits on the site of a former acropolis. Situated in Chora, the capital and port of Astypalaia, the castle features a surrounding wall and only one entrance, located on the southwest side, as well as a tower and two white-walled churches: Panagia Castriana, which dates back to 1853 and Agios Georgios, built in 1790. From its position, visitors enjoy a stunning vantage point of the surrounding area.

On the Peloponnese peninsula in Laconia sits Mystras Castle and the town of the same name on the northern slopes of Mt. Taygetos; both are UNESCO World Heritage Sites. Below the castle is a quaint village worth exploring. As for its history, Frankish leader William II de Villaharduin established it back in 1249 before it was under Byzantine control in 1262 followed by the Turks in 1460, and the Venetians, albeit, a short period.

In northeastern Greece lies the Castle of Ioannina, a fortified old town in Ioannina. Its current form goes back to the late Ottoman period when the ruler Ali Pasha called for its reconstruction. However, the overall architecture is interesting because sections feature Byzantine, ancient Greek, and Normand elements. Two citadels are the main features of the structure. Other highlights include the Treasury and a small bath complex, among others. The site also happens to be the oldest Byzantine castle in all of Greece.

Spanning 93 acres in the port town of Methoni, Messenia in southwestern Peloponnese sits Castle of Methoni, a striking structure built by the Venetians back in 1209. Bordering the sea, the castle is connected by a bridge to the mainland. On the edge, visitors will see an islet and a fortification known as Bourtzi, which served as a prison during the Turkish occupation. Other notable features include a deep moat, a stone bridge, two artillery bastions one dating back to the 15th century and the other to the 17th century, and the north side wall built in the 18th century. Ruins of homes occupied by Venetian lords dot the inside, and there are also remnants of a Turkish bath and a Byzantine church.

On the Akritas cape in southwestern Peloponnese sits the Castle of Koroni with an early history that goes back to the 7th century AD, although the fortification was constructed and completed in the 13th century by the Venetians. The structure sits on the former acropolis of Asini before the Byzantines erected a fortress there during the 6th or 7th century AD. It would later fall under different ownership when the Franks ruled the area in the 13th century before relinquishing it to the Venetians, then falling under Turkish occupation. Today, there is a convent in the castle.