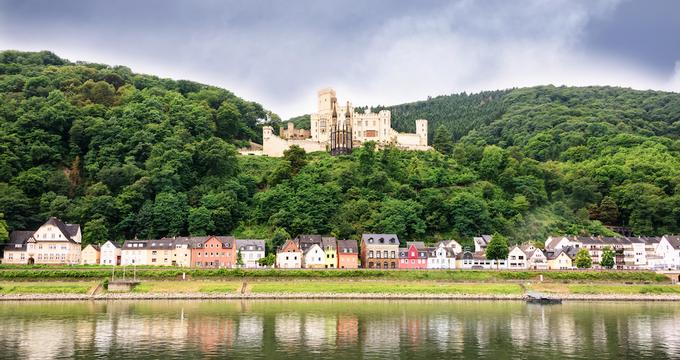 The Stolzenfels Castle is a renovated medieval fortress located on the left bank of the Rhine River, opposite the Lahn estuary in Rhineland-Palatinate, Germany. In ruins when it was gifted to Frederick William in 1823, the Prussian Crown Prince, the castle was rebuilt in the Gothic Revival Style. It has been open to the public for tours since 2011.

The castle and surrounding area are considered a perfect example of Rhine romanticism. Visits to the castle begin in the district of Stolzenfels, and pass through a wooded gorge, waterfalls, rocky grottoes and underneath a centuries-old viaduct before arriving at the castle.

The royal living quarters still hold original furnishings, in place just as they had been in the mid 19th century. Included in the neo-Gothic décor are priceless paintings, tapestries, and weapons. Additional highlights include the Great Hall of Knights and the small Knight’s Hall.

Murals in the Gothic chapel, dedicated in 1845, are considered to be the best surviving examples of the Düsseldorf School of Painting, referring to students of the Dusseldorf Academy in the mid 1800’s who painted finely detailed landscapes that referenced religious allegories. The school grew from the German Romantic Movement and was a great influence upon the Hudson River School painters in the United States. Along with the paintings of the Small Knight’s Hall, works of art at the Stolzenfels Castle represent Rhineland High Romanticism.

History: Dating back to 1259, the castle was originally built as a fort to protect a toll station on the Rhine where ships delivering goods were required to stop and pay tolls. The fort was renovated several times, and notably expanded in the 14th century. Hundreds of years later, it was demolished by the French in the Nine Years War of 1689. During the 18th century the ruin was used as a quarry and many of the original stones were removed. What remains of the old keep forms the core of the castle today.

In 1823, the castle was gifted to the Crown Prince of Prussia, Frederick William, by the City of Koblenz. Several years earlier, William had become enamored with the beauty of the Prussian countryside and set out to refurbish the castle in the romantic Gothic Revival Style. William enlisted the skill of famous Berlin architect Karl Friedrich Schinkel. By 1842 renovations on the castle and surrounding gardens were complete. The Prince, now the King since 1840, celebrated the opening of his summer residence with an elaborate medieval themed celebration. A Gothic chapel was dedicated during a visit from Queen Victoria in 1845, and the castle’s interior was fully refurbished by 1850. The castle was inhabited until 1861.

The castle has been state owned since the close of World War I, and since World War II, it has been under the direction of the Directorate General of Cultural Heritage in Rhineland-Palatinate. In 2002, the site was named a UNESCO World Heritage Site, as part of the Upper Middle Rhine Valley.

Ongoing Programs and Education: Guided tours are available in German, although English brochures are available for English-speaking guests to follow along. The castle is available for weddings, which are held in the chapel, while civil ceremonies take place in the Summer Hall.

Past and Future Exhibits: Once monthly performances at the castle include plays, musical performances and lectures. Upcoming performances include the May 2018 “Of Robbers and Gendarmes” which chronicles the crime spree of Johannes Bückler, otherwise known as Schinderhannes, an infamous German outlaw who committed several crimes in Rhineland throughout the 1700’s. The lecture is accompanied by demonstrations of weapons used at the time, and musical performances of bar songs from the era. Additional summer performances include July’s “I Dreamed this Night” with works by Baudelaire, Schubert, Eichendorff and others, and August’s “Allow!” a comedic performance about the life of Mark Twain, who continues to be popular in Germany. September hosts the annual “Summer Party at Schloss Stolzenfels,” a family-friendly event with live music and entertainment, food and wine vendors, and hands-on games and activities.

What’s Nearby: The Ehrenbreitstein Fortress is located nearby and is suggested as a destination for those seeking an experience to starkly contrast the romanticism of the Stolzenfels Castle. Built around the same period, between 1817 and 1828, the fortress oversaw the middle Rhine region. The Prussian fortress was never threatened, and is part of the same Upper Middle Rhine Valley UNESCO World Heritage Site that encompasses Stolzenfels Castle.

Best Things to Do in Ireland: Dromoland Castle