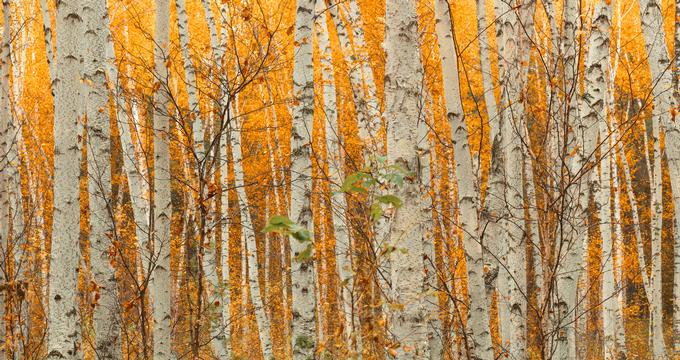 Pando, which is Latin for “I spread,” is the world’s oldest known living organism, a grove consisting of a single male quaking aspen. Pando is what’s known as a clonal colony, a group of genetically identical plants that live in a single location and have grown through vegetative reproduction, not sexually, from a single organism.

Although Pando appears to be a grove of individual trees, its underground roots are connected, and each stem is propagated from this root system. While the 40,000 individual stems cycle through an average 130-year lifespan, the root system is estimated to be over 80,000 years old. Some scientists estimate the organism is closer to 1 million years old. As the individual stems die off, they are replaced by new growth from the root system. Pando lives in the Fishlake National Forest, just 1 mile southwest of Fish Lake in southern Utah, and spans an area of 106 acres. The massive underground root system collectively weighs over 13 million pounds, making Pando not just the oldest, but also the largest and heaviest living organism.

The quaking aspen, or Populus tremuloides, is sometimes referred to as the trembling aspen or white poplar. The name comes from the flattened stalks that connect the leaves to the stems. In most trees, this feature is rounded. This unique flat shape evokes the appearance that the leaves of the quaking aspen are trembling. Even the slightest wind creates both a visual and audible trembling effect. The trees are found in cooler climates throughout North America over a wide latitudinal range from Canada to Central Mexico. Trunks grow quickly, and reach as high as 82 feet. The trees have a smooth, light-colored bark with characteristic black knotting and scarring. Leaves change from glossy green in spring and summer to a golden yellow in autumn and, in rare cases, red. The species is known for reproducing via the process of clonal colonization, meaning it spreads underground through a connected root system. Although aspens do produce seeds, they rarely grow from them. Pollination is inhibited by the fact that aspens are either male or female, and large stands are usually clones of the same sex. Pando is male and is thought not to have successfully flowered for over 10,000 years. This is possibly due to a significant change in the climate 10,000 years ago, which has since rendered the soil unfavorable for the sexual reproduction of the trees and subsequent growth from seedlings. Other scientists point to successful seeding in areas in which forest fires are allowed to burn, indicating that perhaps the abatement of wildfire has decreased the survival of seeds and the diversity of the plants.

Visits to Pando are most popular in the fall, when the leaves are turning golden yellow. Pando is located on Utah’s Fishlake Scenic Byway (U-25).Day visitors to Fishlake National Forest may drive past for a view of the massive organism.

History: Pando was discovered to be single organism in 1968 by the researcher Burton V Barnes, who studied Pando for over 2 years. A researcher from the University of Colorado at Boulder, Michael Grant, substantiated those claims with more advanced techniques in 1992, and claimed Pando to be the world’s largest living organism. Although Pando has grown for possibly 1 million years, the tree is currently thought to be dying. Scientists from the Western Aspen Alliance along with the US Forest Service are studying the tree in an attempt to find out what from, be it insects, disease, or drought. As older growth stems die off, they are not being replaced at the same rate by new growth. One theory is that overgrazing by deer and elk in the area prevent new growth from maturing. Roughly 67 acres of the organism are currently fenced off to prevent grazing and thus allow for new growth. In these fenced off areas. treatments of controlled burning and cutting are being done to help stimulate new stem growth.

The US Postal Service recognized Pando as one of the 40 Wonders of America with a commemorative postal stamp in 2006.

What’s Nearby: In addition to Pando, Fishlake National Forest offers trophy fishing and bird watching, plus recreational activities such as rock climbing, hiking, horseback riding, and off-road vehicle trails. Visitors may see elk, deer, moose, cougars, and bears in the forest. Camping and cabins are available.

Things to Do in Salt Lake City, Utah: Tracy Aviary

25 Best Things to Do in Utah