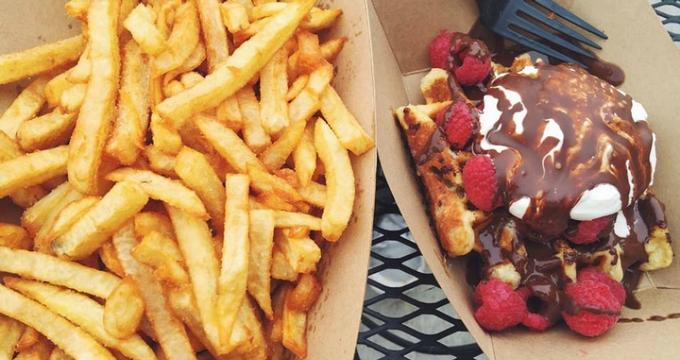 The Bruges waffles are made with a secret Belgian recipe that the co-founders, Pierre Vandamme and Philippe Wyffels, brought with them all the way from Belgium. The co-founders adapted an old family recipe to make the Liège waffle and first started a waffle business on Main Street in Salt Lake City, selling waffles from a vending cart. The duo became popular as Utah's Belgian waffle artists, and very soon added Belgian-style fries called “frites,” to the menu, which also proved to be big hit. The Bruges eateries have earned a lot of media acclamation and a large fan-following since their inception.

Each location of Bruges Waffles & Frites, Co. features unique menu options that include;

Bruges’ menu can be savored from their two food trucks that can even be booked for private events. The Bruges Waffle Bus started in 2014 and serves only Bruges Liège waffles freshly made with only natural ingredients from natural vanilla to pearls of sugar beet imported from Belgium. The Brugesmobile truck started in 2016 and serves Bruges’ best savory menu items, like the Best of Utah frites, all-natural meat artisan sausages, and beer-braised beef stew.

Bruges caters to parties, company events, wedding receptions, and other occasions with prior booking. Each location offers an on-the-spot bake and serve menu from the Bruges truck or with a nice indoor setup.

More Things to Do in Salt Lake City

Things to Do in Salt Lake City: Utah’s Hogle Zoo

25 Best Things to Do in Salt Lake City, Utah

25 Fun Things to Do in Provo, Utah