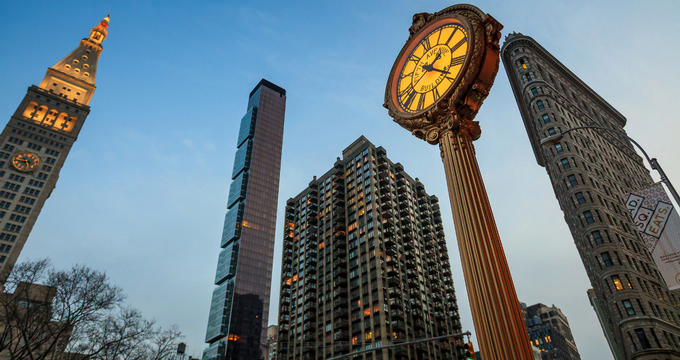 One of the most well-known states in the entire U.S., New York is also one of the most populous and boasts the most populous city in the entire United States: New York City. Known under the nickname of The Empire State, New York has almost 20 million residents in total and is one of the northernmost states in the US, having borders with New Jersey, Pennsylvania, Connecticut, Vermont, Massachusetts, Rhode Island, and Canada. The state of New York is entirely in the Eastern Time Zone. CDC information for travelers. Hours/availability may have changed. 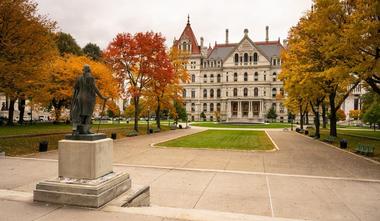 New York has a rich history, being inhabited by tribes of Native Americans for centuries before European colonists arrived on the shores of North America. The state was claimed and colonized by various peoples and was a key location in the American Revolutionary War. The state is most well-known for being the home of New York City, which is arguably the most famous city on the planet and a key leader in fields of fashion, entertainment, industry, technology, tourism, and more.

New York City is, of course, the largest city in the state of New York and boasts a population of over 8 million people, but New York's state capital is actually Albany, a city with a population of around 100,000. Due to its geographical location has a humid continental climate with warm temperatures in summer and freezing temperatures in winter.

2.Activities and Economy in NY 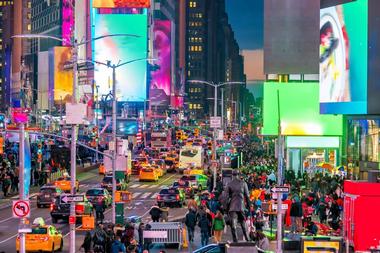 As previously mentioned, New York as a state is best known for its biggest city, New York City. This city provides most of the state's attractions and economy as one of the most visited tourist locations on Earth, boasting major sports teams, monuments, tourist hot spots like Times Square, the New York Stock Exchange, thousands of high-rise buildings, and so much more. New York City, through its multitude of activities and industries, is one of the biggest individual contributors to the American economy.

Outside of New York City, the rest of New York State does still have plenty to offer. Parts of Niagara Falls fall within the state's limits, as well as the Adirondack Mountains and various other areas of natural beauty. The state is also known for its orchards and agriculture, with apples, peaches, and other fruits being grown all around New York. Various lakes, forests, state parks, historical locations, and the famous Hudson River also provide many opportunities for outdoor activities. 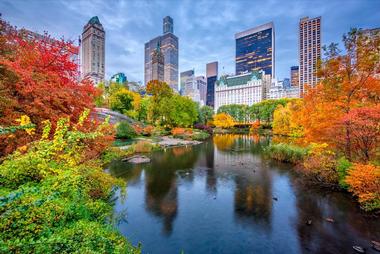 Before the introduction of time zones, people around the United States relied on the sun to tell the time. As the sun would reach its highest point in the sky and cross the meridian line, clocks would be set to midday, meaning that the time in one town or state would differ from another town or state not too far away.

Time zones were introduced a little before the turn of the 20th century, leading to a more structured timekeeping system throughout the entire US. As one of the most easterly states, New York was logically placed within the Eastern Time Zone. While some states are split between multiple time zones, the entirety of New York observes Eastern Time. This is actually the dominant time zone of the US, with a majority of the country's population observing Eastern Time.

You are reading "New York Time Zone" Back to Top 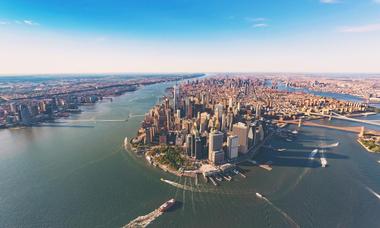 The Eastern Time Zone (ET) covers the entirety of New York, as well as applying in sixteen other full states and parts of five other states. Eastern Time is divided into two forms: Eastern Standard Time (EST) and Eastern Daylight Time (EDT). EST applies outside of the summer months and is five hours behind Coordinated Universal Time (UTC-5), while EDT, which is used during periods of daylight saving time, is four hours behind UTC.

As well as New York and many other parts of the US, the Eastern Time Zone also covers some sections of Canada, one Mexican state, several Caribbean Islands, and some parts of Central and South America. It’s a very important time zone in the US as it covers around half of the American population, including the biggest city (New York City) and the capital, Washington D.C.

The entire state of New York, like most other states in the US, uses daylight savings time. This means that, during several months of the year around the summer time, the state passes from EDT to EST, going from UTC-5 to UTC-4. Daylight saving time was introduced through the Uniform Time Act in 1966 and was extended after the Energy Policy Act in 2005.

Whether you are looking for views of the New York City skyline or want to find a quiet escape from the intense daily life in the City, Central Park is a beautiful place to explore. In the southern part the Park, Wollman Rink and Sheep Meadow feature romantic views of the New York City skyline. In late October and early November, visitors can catch a colorful display of fall foliage throughout the park, and especially along the Mall.

The north end of the Mall leads to Bethesda Terrace overlooking the Angel of the Waters Fountain, one of the most photographed spots in the world. From there, visitors can walk around the Lake, passing Bow Bridge, Hernshead, the Ladies Pavilion, and end up at Cherry Hill. Alternatively, if you walk north from the Lake, you will reach the charming and romantic Shakespeare Garden, located between Delacorte Theater, Belvedere Castle, and the Swedish Cottage. From Belvedere Castle, visitors can enjoy beautiful views of the Great Lawn and the City. The park is a great place to take the kids, offering a collection of playgrounds, a historic carousel, model boat pond and a zoo.

Romantic Spots in the Park

Central Park is a beautiful park to explore, featuring classical sculptures, groomed pathways, secluded coves, lakes, and great views of the New York City skyline. There is an abundance of playful things to do, from riding the Carousel to cheering on model boats racing at Conservatory Water and watching polar bears at the Zoo. A romantic carriage ride through the park is also a city classic. During the warmer months, go on a romantic gondola ride on the Lake and top it off with a lunch at the Boathouse overlooking the Lake and the city skyline. After lunch, stroll around Bethesda Terrace and down the Mall which is lined with huge trees providing plenty of shade. Often there is a musician providing ambiance music.

If you are looking for privacy and seclusion, take a walk across Bow Bridge and through the Ramble, looking out for rare birds and ducks. At the northern end of the Lake, the path opens up to some of the best views of the City. In the winter, rent skates at the scenic Wollman Rink and glide across white ice accompanies by music. Even if you return to the park day after day, you will discover a hidden spot, charming statue, pond and beautiful flowering trees. Here are some of the top attractions to look for.

Central Park carriages are a New York City classic, featured in countless movies and shows. Available to visitors year-round, horse-drawn carriages can be found lined up along Central Park South, at 59th Street between Fifth and Sixth Avenues. Marriage proposals are frequently made during a carriage ride in the romantic park. Ask to be taken to Bethesda Terrace, Cherry Hill and Bow Bridge. The Cherry Hill Fountain at Cherry Hill in Central Park was designed by Jacob Wrey Mould, Calvert Vaux's assistant, in 1860s. The fountain features a sculpted bluestone basin, frosted glass globes for lighting, and golden ornaments at the fountain's top. In the middle of the fountain, black and golden cups overflow with water. At the time of its creation, Cherry Hill was intended to be a scenic turn-around for carriages and the fountain a drinking fountain for horses. Today, Cherry Hill Fountain is surrounded by a circle of benches where visitors rest on their walk though the park. For special occasions, visitors can book various carriage styles, sizes and colors. Carriage rides are a romantic idea for honeymooners. For more information, call 212-736-0680.

Delacorte Theater, located at mid-Park and 80th Street, is home to the Public Theater and the Shakespeare Festival. Every summer, the Public Theater offers open-air performances of Shakespeare plays free of charge. The only catch is that there is always a long wait for tickets. Tickets are distributed at 1 pm on the day of the performance. The line starts to form several hours before then. The theater was originally built in 1962. Ambiance is very unique with the City sky above, lights reflected in Turtle Pond and the magical Belvedere Castle. Two bronze statues decorate the entrance to the Delacorte Theater - the Tempest and Romeo and Juliet. The Tempest by Milton Hebald was placed in the Park in 1966. The bronze statue on granite pedestal depicts Prospero, the magician, sheltering his daughter Miranda with one hand and casting a spell with the other. The Romeo and Juliet statue, also by Milton Hebald, was added to the Park in 1977. The sculpture shows Juliet in Romeo's arms. For information about Shakespeare in Central Park summer performance schedules, visit www.publictheater.org. The adjacent Shakespeare Garden is a beautiful place with uniquely shaped benches and flowers inspired by the plays.