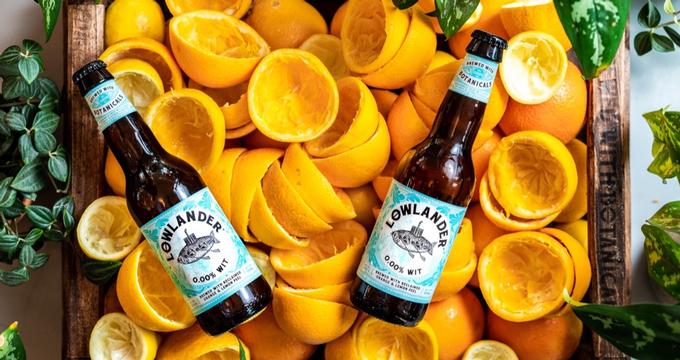 As the oldest alcoholic drinks in the world, the history of beer goes back a long time. It's the third most popular drink on the planet after water and tea and has been enjoyed globally for thousands of years, with beer actually playing a central role in the development of cultures, traditions, and festivals in many countries.

Even with all that history, however, and so many years of development and refinement, creative brewers are still discovering new ways to play around with the classic formula and recipe. One of the most unique and innovative ideas of all is to brew beer with botanical blends, creating highly unique flavors and drinking experiences, and Lowlander Beer is leading the way.

Lowlander Beer is a Dutch beer brewing company focused on the concept of brewing beers with infusions of botanical ingredients like grapefruit, Curacao Orange, spruce needles, cardamom, and more, creating one of a kind flavors and setting a new standard for beer innovation.

The Beers of Lowlander Beer

Lowlander Beer has put together a fantastic range of 'brewed with botanicals' beers so far, with a lot of different options to ensure that the brand is truly able to offer something for everyone. Here's the menu so far:

- 0.00% Wit - As the name implies, the 0.00% Wit beer is a non-alcoholic beer. Light blond and cloud yin appearance, it was brewed with reclaimed citrus peels, shining the spotlight on the fact that 250 million kg of fresh fruit peels are tossed in the trash in the Netherlands each and every year when they could be put to such better use.

- Ginger & Kaffir Lime - The Ginger & Kaffir Lime was inspired by the Dutch spice trade, blending exotic ingredients and spicy fire into one delicious wheat beer. It features 2.5% alcohol, is light golden in color, and contains a range of interesting botanical ingredients including fresh and dried ginger, Kaffir Lime leaves to provide unique citrus and floral notes, cardamom to enhance the overall aroma and flavor, and Darjeeling tea too.

- Yuzu & Pink Graptefruit - Similarly inspired by Dutch trading routes of the past, this unique gose beer, golden in color and featuring 2.5% alcohol, is infused with a range of botanicals including yuzu, a rare Japanese citrus fruit adding a big blast of refreshment and tang to every sip, as well as pink grapefruit, which blends beautifully with the yuzu, and Earl Grey tea with a bit of bitterness to balance out the citrus.

- White Ale - One of the most popular entries on the Lowlander Beer menu, the White Ale really sums up a lot of what this brand is about, offering light and fruity notes with a cool, frosty finish. White Ale is brewed with Curacao Orange for mild citrus tones, as well as elderflower to add a unique floral aroma, and a little bit of soothing chamomile too.

- Grapefruit Pale Ale - Designed to be refreshing, sweet, and delicious like a freshly baked lemon drizzle cake, the Grapefruit Pale Ale is a 3.8% blend. It's brewed with blood orange for those distinctive citrus notes that Lowlander is known for, combined with a little grapefruit too, offering a distinct mix of sweetness, sourness, and bitterness. Finally, sumac, an exotic and rare spice, is also blended in for a truly unique flavor.

- IPA - IPA typically stands for Indian Pale Ale. In the case of Lowlander Beer, however, the brand wanted to make an Indonesian Pale Ale, inspired by Dutch travels in the far east and making use of distinctly Asian flavors. This beer, featuring 6% alcohol content, is brewed with coriander to provide spice and citrus notes, as well as white tea, the rarest of all Asian teas, which provides delicate, sweet notes to the overall blend.

- Poorter - Porter beer has a rich history in the Netherlands, with many people saying that this kind of beer originated with the Dutch, where it is known as Poorter. Lowlander has developed a unique Porter here, blending in some vanilla to add a little sweetness that balances out the black malt, as well as liquorice root to provide delicious, earthy notes.

- Winter IPA - Taking the classic IPA foundation and making it frostier, spicier, and more refreshing, the Winter IPA features 5% alcohol content and is blended with spruce needles, a highly unique botanical ingredient adding distinctive flavors to the Winter IPA, as well as juniper berries, which are typically associated with gin production but have their own flavors and aromas to add to beer as well. website

Great American Eclipse - All You Need To Know About Eclipses

SouveNEAR - Vending Machines with Locally Made Gifts and Souvenirs