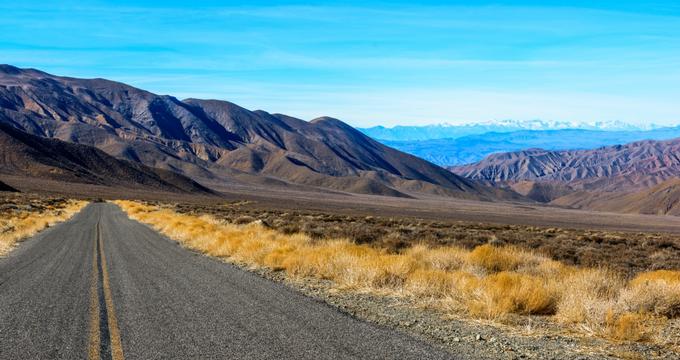 Located in Eastern California between the Great Basin Desert and the northern Mojave Desert, Death Valley is one of the most famous places in this part of the world. Its name gives a hint of how hostile it actually is – Death Valley is where some of the highest temperatures on Earth were recorded. In fact, the daily high temperature during the summer often goes above 120° F.

So, why would you even want to consider getting to such a place? Because this desert has so many natural wonders worth checking out! Those include everything from a large villa from the early 20th century called Scotty's Castle, to a dirt road full of tunnels known as the 20 Mule Team Canyon. There’s also the Zabriskie Point that’s definitely worth checking out, a point that gives you an amazing view of the valley, which is one of the places with the lowest elevation in the United States.

The final reason why it’s worth visiting is that Death Valley is pretty close to Las Vegas, one of the biggest tourist hubs in the whole of USA. In fact, the distance from the center of the city to the desert is just over 100 miles. What this means is that you can take a couple hours of your Las Vegas adventure in order to pay Death Valley a visit, a trip we’re sure you won’t regret taking.

You need just a bit over two hours to get from Las Vegas to Death Valley if you decide to go via the fastest route. Unfortunately, it's also the ugliest of all routes you can take. It takes you to Furnace Creek along the Nevada State Route 160 and the California State Route 190. In total, you are to cover a distance of about 135 miles. What this means is that if you don’t take any stops along the way, you should be at Death Valley in approximately 2h 10m counting from the time of departure from Las Vegas.

But, what’s the point of going on an adventure if you’re not gonna experience some excitements along the way? That’s why our suggestion is to stay away from the shortest route and pick an alternative route. For example, you can take it north from downtown Las Vegas and pass through the Indian Springs and Cactus Springs, the home of Genevieve Vaughan‘s Temple of Goddess Spirituality.

Then, take the Veterans Memorial Highway until you reach Armargosa Valley, where the Area 51 Alien Center is located. Then turn to NV-373 S and drive past Ash Meadows and Funeral Mountains Wilderness Area until you reach the Death Valley Junction. That’s where you should turn right and onto CA-190 and keep driving straight until you reach your destination. This whole journey should not take you more than three hours in total, counting a few stops along the way.

Whichever you route you choose, make sure you have the fuel tank full for this road trip. After all, you’re traveling to one of the least hospitable places in the whole wide world. This is something that even the National Park Service recommends to the visitors of the valley. Apart from the gas stations in Las Vegas, you can find stations at Panamint Springs, Stovepipe Wells, and even at the Death Valley Ranch.

The average fuel price in Nevada is about $2.88 per gallon, which is a bit higher than the country’s average. What this means is that you won’t spend too much cash for your Death Valley trip. Of course, this is only true if you’re going by your own car. If you’re renting, the things are a bit different.

Finding a car to rent in Las Vegas should not be a big problem. There are literally hundreds of rent-a-car companies around the city, but the problem is finding one that’s not too expensive. Fox Rent a Car, for example, is one of the companies with some really affordable deals. Apart from being cheap, this company is also great for a large number of vehicles it has in its garage.

If you can’t find a deal that suits you, our advice is to check out the offer on Kayak.com. That’s where you can find some pretty affordable offers. Some of them are as low as 16 bucks a day. Of course, the price does not include fuel and other expenses.

We’re sorry to disappoint you, but there is no public transport available between Death Valley and Las Vegas. The good news is that many companies organize day trips, which usually include bus transport and a guided tour through the valley. One of those companies is Canyon Tours, which provides half-day trips that cost about 200 dollars.

Bundu Bus is another company you should take into consideration if you wanna get to Death Valley. Although they don’t organize any activities in the valley, they do provide transportation from and to Death Valley four times a week.

Another good option seems to be hiring a minibus. So, if your group would like to have an adventure in Death Valley, you can hire a minibus or a van to take you to the desert and back at the time that suits you the best. One of the companies that offer such a service is Ryan’s Express.

If money is no issue for you, why not hire a private plane to take you from Las Vegas to Death Valley. There is a small airstrip next to Furnace Creek, as well as one near Stovepipe Wells. Unfortunately, no commercial airlines operate here, but you can hire a plane with the help of the people from the National Park.

To find more info about this option, you can contact them on their official website. Also, the people from the National Park Service are very active on social media, so you can get in contact with them through their official Facebook and Twitter pages.