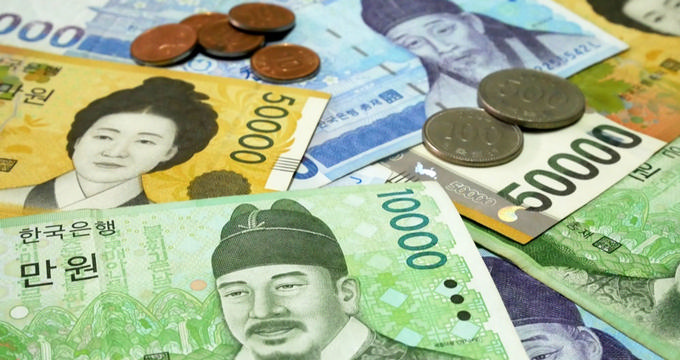 South Korea, also known as the Republic of Korea (ROK), is one of the most popular touristic locations in East Asia. A richly developed nation leading the way in fields of tech, innovation, research, education, and more, South Korea stands out as an excellent place to visit for its diverse scenery and exciting cities. If you want to spend some time in a relaxing environment, you can head out to Jeju Province and explore the lava tubes, beaches, and mountains of the area, while those seeking urban adventures can pay a visit to the big cities of Seoul, Busan, and Incheon, admiring the towering skyscrapers and unique attractions of these vibrant locations.

Whether you’re in the city or out among the temples and villages of South Korea’s more rural locations, you’ll need to have some money on you. Reading up on the currency of the countries you plan to visit is a big part of the preparation for any vacation, and it’s especially important for those heading out to South Korea. As with all countries, South Korea has its own currency system and the South Korean people have their own unique spending habits, so the system of buying and selling services and goods might be a little different when compared to what you’re used to. With that in mind, let’s take a closer look at the official currency of South Korea and how money works in this East Asian nation.

The official currency of South Korea is the South Korean won. The won has the official code KRW and the symbol ?. One won is made up of 100 jeon, but the jeon isn't actually used in regular day-to-day purchases and transactions, so the won itself is the only unit you need to worry about when traveling to South Korea.

For reference, a single won is a tiny fraction of a United States dollar, with one USD being equivalent to over 1,000 won at the latest exchange rates. Check out live conversion tables to learn more up-to-date info on the value of the won.

Coins and Notes in Korea

Various coins have been used in South Korea over the years. Nowadays, you can find South Korean won coins in the following values:

The 1 won and 5 won coins are rarely seen or used in South Korea nowadays due to inflation and the fact that these very small values of money are rarely needed in daily life, but the other coins can be seen with some regularity. The coins of the South Korean won are made from a variety of metals including brass, copper, zinc, aluminum, and cupronickel. They are formed in circular shapes and decorated with various symbols and images associated with South Korea, as well as their value, year of minting and bank title.

Along with the aforementioned coins, you can find South Korean won notes in the following values:

The notes also increase in physical size respective to their monetary value. Each note is decorated with various figures and symbols associated with the Republic of Korea. In addition, the latest set of South Korean won notes have been implemented with a huge array of technologically advanced security features to prevent counterfeiting and make the won one of the most secure currencies in the world.

Using a credit or debit card in Korea is both possible and strongly encouraged. Interestingly, South Korea is one of the countries that uses the least amount of physical cash in daily transactions, with statistics showing only around 20% of transactions in Korea are actually made using cash and the South Korean central bank actually has plans in place of removing cash altogether within the coming years.

As a technologically advanced location, South Korea is the perfect place to use your credit or debit card, and you’ll see that the vast majority of Koreans make use of cards in their daily transactions too. Almost everywhere you go, cards will be accepted, but you may end up paying additional fees on your card transactions depending on the type of card you have and the bank you use, so it’s worth contacting your bank before you travel and finding out all the details.

Using US Dollars or Other Currencies in Korea

The won is the only currency accepted in South Korea, but you can travel with US dollars or other currencies and then get that money converted when you arrive, and this is an option that many travelers tend to choose.

Tips for Currency in Korea

Check out the simple tips below to make the most of your spending money in Korea:

-Don’t just get your cash converted at the first place you see. Different locations like banks and cash exchange counters will have different rates, so it’s worth checking out multiple locations and comparing their offers to get the best deal. A slightly better rate can work out in a lot of extra spending money for you.

-Since South Korea is such a tech-friendly place, cards are a great option, but if you plan on making lots of individual purchases throughout your stay, you may wind up paying a lot of those hidden bank charges mentioned above. Consider carrying cash with you to save money.

-The South Korea 'tour card' is another option for travelers. Designed with foreign tourists in mind, this card lets you get around big cities on subways, buses, taxis, and more all on one card that can be charged up with extra cash as needed over the course of your stay. This card also provides discounts at various locations and is very easy to use, making use of NFC technology for quick and simple payments.

CAN Airport Code - Places to Visit