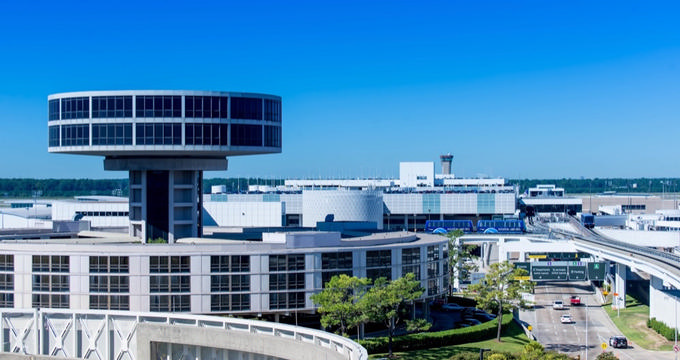 There are thousands of airports all around the world, making travel easier and more accessible than ever before. In order to quickly and easily distinguish between airports, they are given three letter airport codes. This makes it easier for both flight crews and passengers to understand flight information and travel around. The airport code IAH refers to George Bush Intercontinental Airport.


1.Where is Airport Code IAH 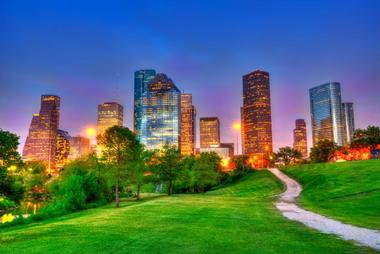 Airport code IAH, George Bush Intercontinental Airport, is located in the city of Houston, Texas. It serves the full Houston area and is situated just over 20 miles outside of Houston's downtown district.

The address for airport code IAH (George Bush Intercontinental Airport) is 2800 North Terminal Road Houston, Texas 77032. A contact phone number for this airport is 281 230 3100, while a contact email for airport IAH is info@fly2houston.com

George Bush Intercontinental Airport opened up in June of 1969. The land had been purchased and planned out as an airport over a decade earlier. The airport code IAH came from the fact that this airport was initially known as 'Intercontinental Airport of Houston'. In the 1980s, a plan was put forth to rename the airport after Mickey Leland, a United States Congressman who had tragically passed away in an aviation accident. Rather than renaming the whole airport, however, just one of the buildings was named after Leland, and this building would later develop into Mickey Leland Terminal D.

Then, in the late 1990s, the city's council voted to give the airport its current name of George Bush Intercontinental Airport in honor of George H. W. Bush, the 41st President of the United States The major airport in the Houston area was initially William P. Hobby Airport, but IAH has overtaken it in terms of passenger traffic over the years. The airport has also seen great expansion; it originally had just two terminals: A and B. however, Terminal C opened up in the early 1980s, Terminal D opened in 1990, and a fifth terminal, Terminal E, was opened in 2004. Terminals D and E are both used for international flights.

American Airlines, Braniff, Continental, Delata, Easter, National, and Texas International Airlines served IHA in the early days, but the list of airlines operating at the airport has also expanded greatly overt the years, with more scheduled to start flying in and out of the airport in years to come, linking IHA with even more destinations all around the world. 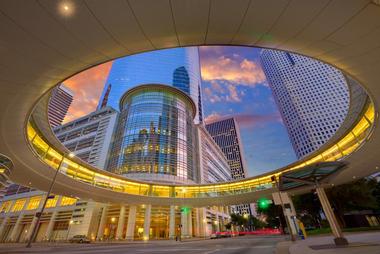 Parking at IAH airport is very easy, with over 25,000 individual parking spaces on the airport's lots. Valet parking, corporate parking, terminal parking, and an Ecopark area are found at this Houston airport, with prices varying from around $5 per day to over $25 per day.

Getting To and From IAH

Getting around at IAH is surprisingly easy, with the airport having lots of good public transportation links. Various car rental companies operate around IAH, letting you hire cars upon arrival in Houston or drop off rented cars from other places. Many taxis operate here too, and it takes a little over half hour to get into the downtown area of Houston from IAH. Multiple shuttle buses and METRO buses are operating at IAH as well, offering multiple routes into the city. 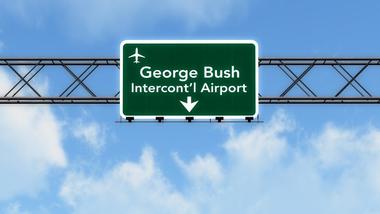 If you'd like to get around between the terminals at the airport, IAH is equipped with both a Skyway and a Subway system. The Skyway system links all five terminals with the International Arrivals Building and is useful for passengers who are taking connecting flights at IAH. It's fully free to use. The Subway, system, operate for passengers who haven't yet gone through the security checkpoints. It runs between the five different terminals and also operates to and from the airport's on-site hotel.

IAH actually has its own on-site airport, situated right between Terminal B and Terminal C. This is the Houston Airport Marriott, which is located at 18700 John F Kennedy Blvd, Houston, TX 77032 (281 443 2310) and is the most convenient option for people flying in or out of IAH. Featuring bright, airy rooms and clean facilities, this airport has subway links directly to the various airport terminal buildings and is also equipped with some good amenities like a pool, gym, cafe, bar, and business center.

There are several other hotels located within just a few miles of IAH. Here are some names and addresses:

Dallas to Galveston Distance: Driving, By Plane, Train or Bus