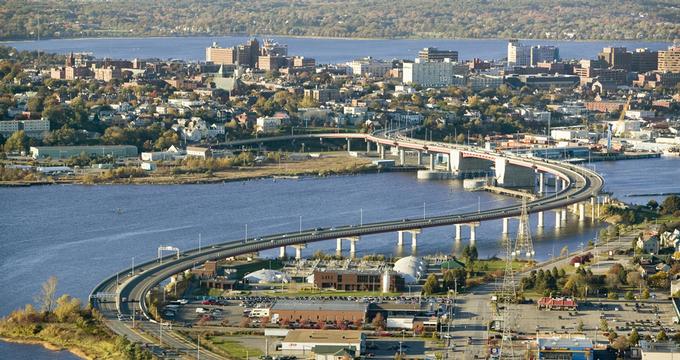 Portland, Maine has a somewhat temperate climate because the Portland peninsula protects the area from the Atlantic Ocean. This means winters are mild and summer brings cool breezes. Portland has four seasons, each of which is a special time to visit this fascinating city. Spring brings blooming trees and flowers while museums and restaurants that have been closed reopen for the season. This is the best time to visit Portland, Maine for garden lovers. Summer means sunshine and breezes, perfect for exploring sandy beaches, sailing and sightseeing. Summer is the best time to visit Portland, Maine if you want to enjoy great weather. Autumn in Portland is a time of amazing colors as the leaves change and begin to fall. Winter in Portland offers a variety of outdoor sports activities like skiing, skating and sledding.


1.Getting to Portland, Maine

January is the coldest month in Portland with average high temperatures of 31°F (0°C), and average low temperatures of 13°F (-10°C). January is considered the best month for winter sports as it sees the highest average of snowfall in the entire year - a hefty 19 inches (48 cm).

In February, temperatures rise slightly and the average snowfall decreases to 12 inches (31 cm). Average high temperatures creep up by about 4 degrees, 35°F (1°C), while average lows are at 16°F (-9°C).

Portland weather in March: Temperatures continue a steady rise in March with winter nearing its end. Snowfall increases by roughly an inch and average high temperatures peak at 42°F (6°C). Winter activities continue to be top recreational activities thanks to Portland’s the steady snowfall.

In April, temperatures range between an average high of 53°F (12°C) and an average low of 35°F (2°C). Snowfall dramatically decreases to 3 inches (8 cm), finalizing the transition of the season to spring.

May sees an average high temperature of 64°F (18°C). Make sure to keep a light cardigan or sweater on you or nearby though as the weather tends to fluctuate and average lows can hit a crisp 44°F (8°C).

Portland weather in June: The temperature in June jumps to an average high of 73°F (23°C) as summer starts to roll around. June is a great time to start planning trips to nearby lakes or beaches as the state typically has a comfortable statewide summer climate. Average low temperatures reach 54°F (12°C).

July is the warmest month in Portland with average high temperatures peaking at 79°F (26°C). Summer nights are comfortably cool at 59°F (15°C).

In August, average high temperatures cool by a degree. Low temperatures also decrease a tad to 58°F (15°C). August is also the driest month in Portland with average precipitation of 3 inches (80 mm).

Portland weather in October: Precipitation averages for October are one of the city’s highest at nearly 5 inches (124 cm). Temperatures also make a significant decrease with an average high temperature of 59°F (15°C).

November has the highest level of precipitation in Portland at 5 inches (125 cm). Temperatures continue to drop and short bouts of snow fall begin. Average low temperatures can hit a chilly 31°F (-1°C).

In December, temperatures continue to drop for Portland’s third coldest month and snowfall leaps to a 13 inch average (33 cm). The average high temperatures are 37°F (3°C) while average low temperatures can sink to 20°F (-6°C).

The best months to enjoy lobster in Maine are April through June and December, while soft-shell lobsters are plentiful towards the tail end of summer in September. Best months for whale watching are typically between June and September, but are usually largely depending on when the herring start arriving as well. Fall foliage displays at their best in October.

2.Getting to Portland, Maine

The Portland International Jetport is served by several major airlines. There are car rentals and taxis to take you into Portland, and Amtrak runs a train service from Boston’s North Station. It’s a short bus ride from the Portland train station to downtown or a 30 minute walk. There are two bus companies that serve Portland, bringing passengers in from Boston and Bangor. Both bus stations are not far from downtown Portland which can be reached by walking, by city bus or by taxi. Arriving by car is easy as Portland sits not far from I-95, and it’s just two hours north of Boston.

3.Getting From the Portland, Maine Airport

The Portland International Jetport offers several options for ground transportation into the city. Taxis are available from the arrival of the first morning flights until the departure of the last flights in the evening, and use a flat rate guide. There are six rental car agencies located at the jetport: Alamo, Avis, Budget, Enterprise, Hertz and National. There are also private companies that offer transportation into Portland by limousine, car and van. The Greater Portland Transit District METRO is a bus service that runs between the jetport and the city (Route #5) as well as areas around Portland.

4.Information for Visitors in Portland, Maine 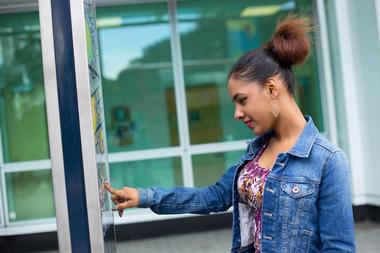 Portland has a variety of information centers all of which provide valuable information to visitors. Why not start at the Jetport? The Portland Jetport Information Center kiosk is conveniently located next to the baggage claim area and is open every day until 10:30 p.m. There are two other information kiosks in Portland: One is at Deering Oaks Park and the other is located outside the cruise ship terminal. The Convention and Visitor’s Bureau of Greater Portland on Commercial Street is open all year long and offers a wide range of brochures. The Ocean Gateway Information Center is on the Ocean Gateway Pier in Portland.

5.Getting Around Portland - Public Transportation: Bus


METRO is the name of the bus service that provides transportation around Portland and surrounding areas including Falmouth, Westbrook and the Maine Mall area which is in South Portland. METRO provides bus service to all the major attractions and hotels in the Greater Portland area. It also provides convenient connections to ferry, train and regional bus transportation. Fares are reasonable and discounts are available for seniors and people with disabilities. METRO also offers a day pass which is helpful for tourists who want to visit several places in Portland on the same day. Bus schedules are available at several locations around the city.

There are lots of restaurants in Portland, but the first thing that comes to mind is seafood, more specifically lobster! Maine Lobster is known for its sweetness and lobster rolls are a must try when visiting. The lobsters are hand-caught by local lobstermen, and it is said that if a lobster is not from Maine, it is not a lobster! For visitors who are not interested in lobster and seafood, there are many other choices. American food is offered at Becky’s Diner, Five Fifty-Five, Fore Street, Portland Market House and The North Point. There are also Asian restaurants like The Green Elephant; French bistro’s like Petit Jacqueline; and even Eritrean cuisine served at Asmara.

Portland is known for its antique and secondhand furniture stores which can be found on Congress Street, in the arts district and on Munjoy Hill. There are also auction houses that offer auctions several times per week. If you’re not into antiques, check out the Old Port for something more modern. Here you’ll find lots of boutiques and shops offering contemporary unique clothing as well as artisan and craft shops. The Public Market House on Monument Square is a fun place to shop and visitors should expect to find the usual market offerings like local produce and gourmet goods. The Maine Mall is a shopping center in South Portland that is open every day of the week. 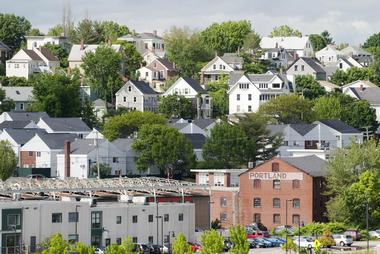 The city of Portland is made up of a variety of interesting and unique neighborhoods. The heart of Portland is the downtown area with is waterfront, bookstores, galleries, museums and restaurants. Not far from downtown is Back Cove with quiet residential streets full of three-story Victorian houses and a popular running trail. There are many schools in the Deering Center neighborhood as well as the Baxter Woods Nature Preserve. East Deering provides stunning views of Casco Bay and is the home of Payson Park. There are many businesses in East Bayside like Portland Power Yoga, Rising Tide Brewing Company, Tandem Coffee and many more.

9.Getting Married in Portland, ME

Portland offers many choices of venues for weddings ranging from elegant five star hotels to rustic farms. Some of the venues are in Portland and some are in nearby areas around Portland. Diamond’s Edge Restaurant and Inn at Diamond Cove in Portland is an outdoor wedding location on an island with views of the ocean. In the heart of Old Port is the Portland Regency Hotel and Spa which provides services for ceremonies and receptions. The Westin Portland Harborview is another Portland hotel that is a popular venue for weddings. Wolfe’s Neck Farm in Freeport is set along the ocean with farmland, forests and historic buildings all making it a unique wedding location.

10.Where to Stay in Portland, Maine

Visitors to Portland will find that the city offers a wide variety of accommodations. Hotels are sometimes set in historic properties; some are pet friendly; some are green certified; some have pools and spas on-site; and some are oceanfront. Many of the Bed and Breakfasts are housed in historic buildings and offer very personalized service. Atlantic Birches Inn in Old Orchard Beach is a historic Victorian Bed and Breakfast as is Inn at Park Spring set in downtown Portland. Portland is also home to many lodges and cabins such as Migis Lodge on Sebasco Lake, Sebasco Harbor Resort, and the Pride Motel and Cottages in Scarborough.

25 Best Things to Do in Portland, Maine