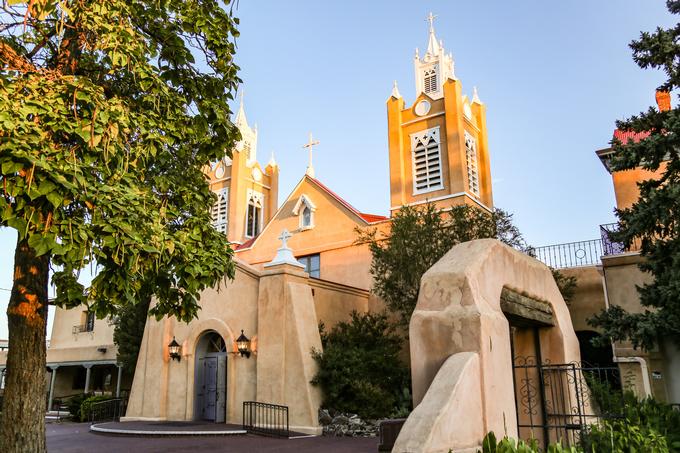 Albuquerque is known for its sunny climate: it boasts 310 days of sunshine each year. Although the climate is mild and dry, there are four seasons in Albuquerque. Most people agree that the best time to visit Albuquerque is between September and November. This fall season has warm temperatures and there are many festivals that take place during these months.

During the winter months, skiers visit Albuquerque to enjoy the slopes of the Sandia Mountains. This is a popular time to visit Albuquerque, so room rates are usually higher than at other times of the year. There are many hotel deals during the spring and summer.

Read more: 25 Best Things to Do in Albuquerque, NM. 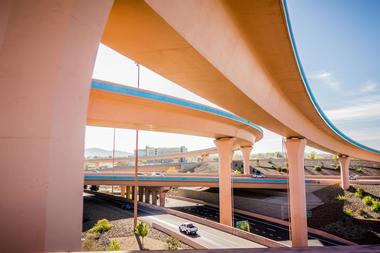 January is the second coldest month in Albuquerque. During this month, average high temperatures reach 47°F (8°C), while the average lower temperatures will drop to 26°F (-3°C). Despite being one of the year’s coldest months, the over all climate remains mild and enjoyable.

In February, average high and low temperatures creep up to 53°F (16°C) and 30°F (-1°C) respectively. February also sees the least amount of sunshine out of the entire year. Expect an average of 218 hours of sunshine.

Albuquerque Weather in March: Spring begins in March and is marked by the flowering of trees and bushes around the city. The average high temperature rises to 60°F (16°C), making this month one of the best for easy afternoon hikes.

April is the peak of spring in Albuquerque as the warming trend continues to rise. Water levels begin to rise with water coming down from the snow peaked New Mexico mountains and the precipitation is spring’s highest at half an inch (15 mm). High temperatures peak at 69°F (21°C). Low temperatures also make a considerable increase to 43°F (6°C).

Albuquerque Weather in May: Temperatures jump ten degrees in May for both high and low average temperatures. Peak high temperatures hit 79°F (26°C) while peak low temperatures are at 53°F (11°C).

June is the month with the most hours of sunshine in Albuquerque at 365 hours. The heat continues to rise for this month as the average high temperatures reach 88°F (31°C). Low temperatures are 62°F (16°C).

July, on the other hand, is the hottest month of the year in Albuquerque. High temperatures top the yearly charts at 90°F (31°C). Summers in Albuquerque tend to be very dry and humidity stays relatively low.

October marks the beginning of fall with a steep downward decline for average high and low temperatures. The warmest average temperature hits 69°F (21°C) while the coldest average for temperatures is 46°F (8°C).

In November, Albuquerque experiences an inch of snow (8 cm) as temperatures continue to drop. Low temperatures are 34°F (1°C).

December is the coldest month of the year in Albuquerque with average low temperatures going as low as 26°F (-3°C). This month also has the high amount of snowfall out of the year with an average of 3 inches (8 cm).

The best time to go skiing in New Mexico is generally in December due to the higher averages of snowfall. Other winter sports like snowboarding is also recommended in December in the nearby Sandia Mountains. Interestingly, many people recommend playing golf and tennis in November thanks to the cool weather. Meanwhile, the best time to hike in Albuquerque is April through May. 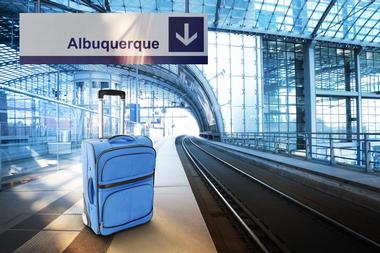 The Albuquerque International Sunport is New Mexico’s largest airport: more than six million travelers use the airport each year. The airport is served by many national airlines and connects Albuquerque with about 30 cities across the country. For train lovers, Amtrak is a major stop from Chicago and Los Angeles. Greyhound buses also serve Albuquerque.

Buses and trains both arrive at the Alvarado Transportation Center in downtown Albuquerque. Some visitors choose to drive to Albuquerque. This is a convenient way to arrive in the city because two major interstates meet in Albuquerque: I-25 runs north to south while I-40 runs east to west.

3.Getting From the Albuquerque Airport

There are several ways to get from the Albuquerque International Sunport to the downtown area of the city. There are several shuttle companies that make the trip: these include the Sunport Shuttle and the Roadrunner Shuttle and Charter. Both of these shuttles take visitors from the airport to hotels, businesses, residences, and more.

The rates are reasonable and the customer service is excellent. The shuttles operate 24 hours a day and seven days a week. They are also wheelchair accessible. ABQ Ride is Albuquerque’s public bus system: there are two bus routes that serve the airport. Taxis and limousines are also available.

Albuquerque has two visitor information centers. The first is conveniently located at the Albuquerque International Sunport so that visitors can be informed before they arrive in the city. This information center is found on the baggage claim area: it is staffed every day by volunteers during the day, but information is still available to visitors when the center is not staffed.

The second information center is located in the Old Town area of Albuquerque. It is open every day of the week and is found at 303 Romero Street in Plaza Don Luis. At both centers, staff can help visitors with directions, accommodations, things to see and do, and more. 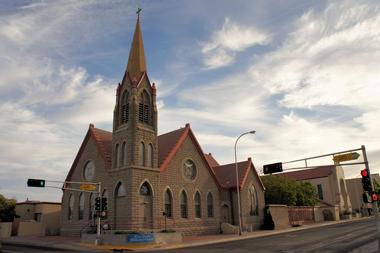 
Albuquerque’s public transport system is called ABQ Ride: it is the best way to get around the city. There are many routes around downtown Albuquerque as well as some of its suburbs. Buses run every day and fares are reasonable: there are discounts for children, students, and seniors.

ABQ Ride also offers multi-day passes and a free shuttle called the D-RIDE around the downtown area. If you want to travel outside of the city you will need a car; Uber is another way to get around the city. Biking is a fun way to see the city: there are more than 400 miles of bike trails and paths.


Albuquerque is famous for its New Mexican regional cuisines. Some people make the trip to Albuquerque just to savor the food! New Mexican dishes are often a combination of Spanish, Native American, and Mexican flavors.

Chilies are used extensively in New Mexican cuisine, so the official state question is “Red or green?” In addition to regional cuisine, there are places that serve other kinds of food. There are upscale fine dining restaurants; Japanese sushi bars; Mexican taquerias; and Italian brick-oven pizzerias. Other ethnic cuisines include Chinese, Greek, and more. Visitors can also taste some of the local beers and wines at brewpubs and wine bars.

Albuquerque is a great place for visitors to shop. There are plenty of shops that sell Native American arts and crafts like jewelry. Old Town is a popular historic area for shoppers to explore. In the charming adobe shops and galleries in Old Town, visitors will find many authentic Southwestern items such as art, pottery, rugs, weavings, and much more.

There are more than 40 shops around the Old Town plaza. In addition to Old Town, other popular shopping areas include Downtown, Nob Hill, and Uptown. Three of the biggest shopping malls in the state are located in Albuquerque, but ABQ Uptown is considered to be the best of the three.

Albuquerque has eleven different neighborhoods, and each one reflects the city’s great diversity. Historic Old Town was founded in 1706 and has shops, museums, galleries, and restaurants. Downtown has been revitalized and is full of restaurants, theaters, nightclubs, and the Albuquerque Convention Center. Nob Hill is known for its nightlife, upscale dining, and unique shops.

The University of New Mexico is located in the Midtown/University area. The Uptown area is a business center with two shopping centers, the Coronado Center, and EXPO NM, the home of the New Mexico State Fair. The Eastside neighborhood sits in the foothills of the Sandia Mountains and is popular for its outdoor activities.

9.Getting Married in Albuquerque 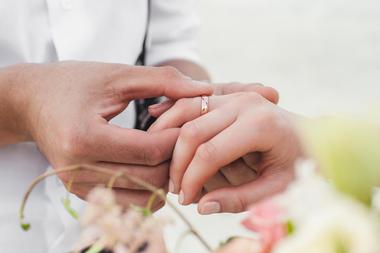 Many people choose Albuquerque for their wedding because of its beautiful and unique ambiance. A marriage license is required and can be obtained at the local county clerk’s office. For those who are interested in a hotel venue, some choices include the Hotel Albuquerque at Old Town, the Sheraton Albuquerque Uptown, the Albuquerque Marriott Pyramid North, and the Hyatt Regency Albuquerque.

There are many options in addition to the numerous hotels in the city. The Koinonia Gardens Venue at Koinonia Church includes flowers, a gazebo, and water features. Another garden setting is the Albuquerque Garden Center. Other options include the Echo Basin Ranch and the Sanctuary on the River.

10.Where to Stay in Albuquerque

Albuquerque offers a wide variety of accommodations. There are luxury hotels and resorts, bed and breakfasts, and more. Because there are so many hotel rooms in Albuquerque, it is usually easy to find rooms with reasonably priced rates.

The exceptions to this are the peak seasons: late June for the New Mexico Arts and Crafts Fair; September for the New Mexico State Fair; and early October for the Albuquerque International Balloon Fiesta. One interesting hotel is the Andaluz: it was built in 1939 by Conrad Hilton and was recently renovated. Nativo Lodge is known for its artwork created by Native Americans. Adobe Garden at Los Ranchos is a Spanish style bed and breakfast.