Things to Do in Juneau, Alaska: Sealaska Heritage Institute 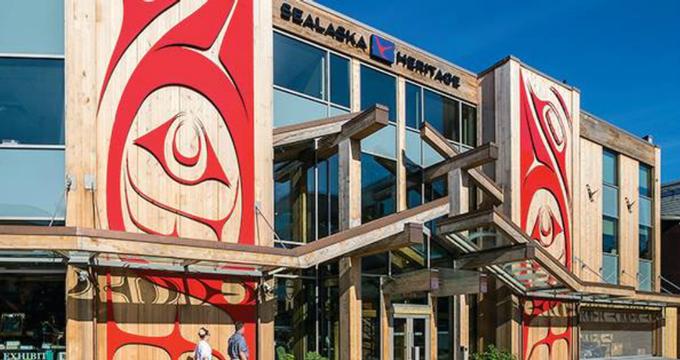 A permanent exhibit called True Southeast educates visitors on the history of 10,000 year old indigenous Alaskan cultures. Cultural history is represented with a substantial collection of native Alaskan ethnographic artifacts. A new Alaska Native mask exhibit features hand made masks used in storytelling, performances and spiritual ceremonies. In addition to the Tlingit, Tsimshian, and Haida cultures primarily represented at the Institute, the mask collection includes the work of Iñupiat, Yup’ik, Alutiiq, and Athabascan craftsmen. Monumental Art includes two 40-foot-tall carved wood panels on the exterior of the building designed by the Haida artist Robert Davidson. Once inside the building, visitors face a Tsimshian house front made by David A. Boxley, a Tsimshian master artist. The carved, painting house front is thought to be the largest of its kind in the world. A small door leads to an authentic clan house, more formally referred to as Shuká Hít, or Ancestors’ House, during ceremonies. Inside the clan house is a large black glass and amber decorative screen by Preston Singletary, a Tlingit artist who creates traditional imagery with contemporary media, introduced to indigenous culture “after contact.” The clan house follows the traditional geometry of wooden tiers surrounding a central fire pit. A small carving of a child’s handprint in a corner of the clan house is a nod to the ancient tradition of ceremonially placing an X or handprint during the dedication of the space.

History: The Sealaska Corporation founded the Heritage Institute in 1980 as a non-profit institution dedicated to preserving southeast Alaskan heritage, cross-cultural understanding, and cultural diversity in southeast Alaska. The organization is governed by a Board of Trustees, Native Artist Committee, Southeast Regional Language Committee and Council of Traditional Scholars, which ensures representation across a wide variety of disciplines. The Heritage Institute embraces a mission based upon core values of the Tlingit culture, including honoring the land, honoring strength of body, mind and spirit, honoring past and future generations and finding social and spiritual balance between tribes and cultures. The Walter Soboleff Building was dedicated in 2015 and is the landmark new home of the Heritage Institute in downtown Juneau. The building’s namesake, Dr. Soboleff (1908-2011) was a Tlingit spiritual leader of the Dog Salmon clan. A Presbyterian minister who served the native communities of Alaska, Soboleff broadcasted radio news in the Tlingit language, and was an advocate for cultural education, as well as equal human rights for indigenous Alaskans. He was influential and widely revered in southeast Alaska and beyond.

Ongoing Programs and Education: The Institute is home to a wide variety of programming in language and the arts. Language resources include online dictionaries, phrasebooks, verb databases and clan names. Apps, games, curricula and educator resources are available to help anyone learn. Tools for Teachers helps support K-12 educators culturally integrate core subjects and teach native languages. Lectures at the Institute explore history as well as current cultural themes. Past talks have included “Onward Christian Soldiers: the Writings of the Alaska Native Brotherhood/Sisterhood” and “The Sitka Tlingit and the Pacific Northwest Gun Frontier.” Art Programs at the Institute include workshops and apprenticeships in traditional arts such as spruce-root weaving and Halibut hook carving. Annual art events include a juried art show, native fashion show, and art auction. An artist in residence program supports local artists with dedicated work areas, and access to the institute’s library, archives and art collection.

The institute is host to the biennial “Celebration,” the second-largest gathering of Native Alaskans in the state, which has taken place since 1982. Celebration will take place next in June of 2018. The four-day event draws over 2,000 traditional singers and dancers. Arts, crafts, food and performances fill the streets of downtown Juneau during this festival that celebrates the Tlingit, Haida, and Tsimshian cultures. Most of today’s dance groups are a mix of all three cultures, reflecting the scattering of clans and the movement of people as they pursue modern careers and interests. Celebration is thus a new tradition and a true celebration, absent of some of the more traditional adoptions, memorial services, and name givings that take place within ceremonies specific to each clan.

More Things to Do in Juneau, Alaska

Things to Do in England: Warwick Castle in Warwick

Things to Do in England: Belvoir Castle in Leicestershire

Things to Do in Detroit, Michigan: Detroit Zoo