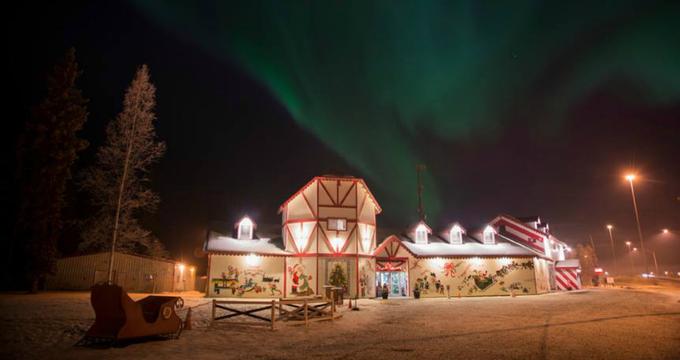 At the Santa Claus House in North Pole, Alaska it is Christmas every day. The holiday-themed general store has been open since 1952, and now sells an extensive collection of Christmas related items in its 9,000 square feet of retail space. The large white frontier style building is holiday themed, streetlights are striped like giant candy canes, and photo opportunities abound. Year round, the store offers classic toys, gifts and collectibles, apparel and exclusive merchandise including Alaskan themed ornaments and gifts made in Alaska.

Homemade fudge, coffee and espresso are available. Visitors enjoy the holiday-themed photo opportunities with the 42-foot tall Santa statue from the 1960’s, Santa’s reindeer, which live in a barn next door, and Santa himself. When Santa is not present, a large stuffed Santa resides in the life-sized sleigh at the center of the store. In addition to the retail operation, Santa Claus House is famous as the home for Letters from Santa and Deeds to the North Pole. Since the 1960’s, the Santa Claus house has been mailing letters from Santa to children all over the world. Equipped with a postmark from the North Pole, the letters are customized for each recipient, include one “Santa Dollar,” a “Santa’s Official Mail” seal, and a sticker indicating the recipient is on “Santa’s Good List.” Letters arrive on official Santa Claus stationery.

The same stationery has been used since the 1960’s, with only a few minor changes. In addition to the letter from Santa, the House sells genuine deeds to one square inch of North Pole property, allowing children to feel they have a “toehold in the far north.” Deeds arrive with the same genuine North Pole postmark, the official seal of Santa Claus, a photograph of Santa himself, and Santa’s “good list” sticker.

History: The Santa Claus House began with Con and Nellie Miller in 1949. The Millers had recently moved to Alaska and were looking to establish a business in the area. Each Christmas, Con would don a Santa Claus suit and became a celebrity among the local children. When he was recognized as Santa Claus at his general store in 1952, he was struck by an idea. The Miller’s general store 13 miles south of Fairbanks was about to become the Santa Claus House, located in an area aptly named “the North Pole.” Since North Pole was between two military bases, the store originally provided locals with general necessities, operated a soda fountain, and served as the town’s post office. By 1972, the community had grown, and so had the Santa Claus house.

With a new four-lane highway out front, the Santa Claus House built a new storefront, and expanded their merchandise to include holiday-themed items. The business continued to grow, and by the mid 1980’s had expanded with a new wing, and the addition of a 42-foot tall plastic Santa Claus out front. Stanley Plastics built the 900-pound statue in the 1960’s. Over the years, as the Santa Claus House grew, the Millers remained fixtures of the local community. Con was the longest serving mayor of North Pole, with a 19-year streak, and Nellie, a community marriage commissioner, has married thousands of couples at the Santa Claus House. Today, the Santa Claus House receives hundreds of thousands of letters to Santa each year, and mails out their own to customers all over the world. Thousands visit the North Pole location to enjoy the Christmas spirit year-round.

Ongoing Programs and Education: Santa himself is available for consultations and photo opportunities during the summer months, and also from November through December 25th. Christmas themed events take place year round. Holiday parades include Cruisin’ with Santa, a car show and street fair hosted each May in partnership with the North Pole Lions Club. Jingle in July is an annual 5-kilometer run or walk that raises funds for the Arthritis Foundation. From November through December each year an ice art festival takes places at the Santa Claus House. Over 600 tons of ice is carved into sculptures, a maze and an ice slide. The popular outdoor exhibit is open on Christmas Day, although the shop is closed.

What’s Nearby: North Pole, the small city just south of Fairbanks has gained popularity as a Christmas-themed tourist town. Streets are named Snowman Lane, Kris Kringle Drive, and Santa Claus Lane. Emergency vehicles are all bright red, and police cars are green and white, matching the candy-cane striped streetlights throughout the town.

Things to Do in Anchorage, Alaska: Oscar Anderson House

Things to Do in Anchorage: Alaska Railroad

Things to Do in Alaska: Sitka National Historical Park