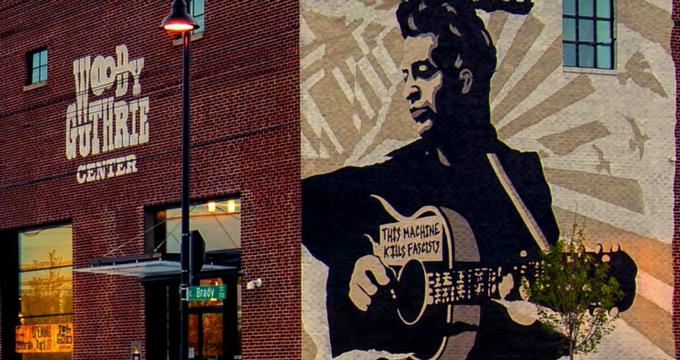 Located in Tulsa, Oklahoma, the Woody Guthrie Center is a museum dedicated to the legacy of American folk musician Woody Guthrie, displaying a variety of exhibits to the singer’s life, career, and music. Woodrow Wilson Guthrie was born on July 14, 1912 to a middle-class family in Okemah, Oklahoma.

Guthrie developed an early fondness for folk music through the musical teaching of family friends while living in Oklahoma, where he resided until the age of 14, when his mother was hospitalized from complications related to Huntington’s disease. During the Dust Bowl era of the early 20th century, Guthrie moved to California to look for work and secured a job at the Los Angeles-based radio station KFVD. As a member of the Los Angeles social justice community, Guthrie was associated with a number of Communist groups within the United States and wrote a regular column in the newspaper People’s World between 1939 to 1940. Guthrie’s relationship with KFVD ended following the start of World War II, as the station did not support the musician’s Communist views, and in 1939, Guthrie moved from Los Angeles to New York.

In 1940, Guthrie recorded his debut album, Dust Bowl Ballads, which gained him the nickname of “the Dust Bowl Troubador” within folk music circles. Throughout his professional music career, he authored hundreds of songs related to political and social justice topics, as well as a number of children’s songs and improvised ballads. His most well-known song, “This Land is Your Land,” now considered a classic American folk and children’s music staple, was written in response to Irving Berlin’s “God Bless America.” Since his death in 1967, Guthrie has remained one of the most influential musicians in American music history, credited as an inspiration for singers such as Johnny Cash, Bob Dylan, and Bruce Springsteen.

The basis of the Woody Guthrie Center’s collections come from the personal collection of Guthrie’s daughter Nora, who had maintained a large number of Guthrie’s personal and professional artifacts into the 1990s. In the early 2010s, a nurse who had overseen Guthrie’s mother’s hospitalization contacted Nora Guthrie with information about the rediscovery of his mother’s gravesite. The gravesite location became the location for a planned museum honoring Guthrie, which was developed following the 2011 acquisition of Nora Guthrie’s collections by the George Kaiser Family Foundation. The Center officially opened to the public in April of 2013. The following year, a large collection of archives related to the career of musician and social activist Phil Ochs was donated to the Center by his daughter, Meegan Lee.

Today, the Woody Guthrie Center is owned and operated by the George Kaiser Family Foundation nonprofit organization, which oversees supervision of both the Guthrie and Ochs collections. More than 10,000 items related to Guthrie’s life, career, and music are displayed at the Center, including handwritten song lyrics, companion illustrations for children’s songs, and original recordings and photographs of the singer. As a community educational facility, the Center is dedicated to the preservation of Guthrie’s body of work and to the promotion of the social and political justice values he fought for throughout his career.

The Center’s interactive museum offers a short orientation film for visitors detailing the singer’s life and career, along with a variety of exhibits showcasing original artifacts and multimedia archives. Several exhibits chronicle the singer’s early history and the cultural forces that shaped it, including a Woody’s Footsteps exhibit that details his life in Oklahoma, Los Angeles, and New York and a Dust Bowl exhibit focused on the cultural climate of the era. A Music Bar allows visitors to select from a database of Guthrie’s songs, and a Lyric Writing Station encourages composition of original works inspired by Guthrie’s legacy. A number of Guthrie’s original instruments are showcased, including a fiddle, mandolin, and guitar, along with the original handwritten lyrics to “This Land Is Your Land.” A gallery showcases the museum’s Ochs Collection, and a special exhibit gallery also showcases rotating exhibits related to other influential folk musicians and social justice activists. The Woody Guthrie Archives library area also offers more than 5,000 volumes for students and researchers.

In addition to curriculum-incorporated field trip opportunities for elementary and secondary school students, the Woody Guthrie Center offers a variety of educational programming encouraging artistic creativity for students and community members as a means of self-expression and social activism, including a Youth Rocks! after-school program teaching songwriting skills to students ages 12 and older. An Art of the Protest Song program educates participants about the history of protest music in the United States and beyond, and a folk concert series brings current icons and upcoming performers to the museum for special performances. Periodic lectures and talks are also held as open public events.

More Things to Do in Okahoma