Things to Do in Nevada: Valley of Fire State Park 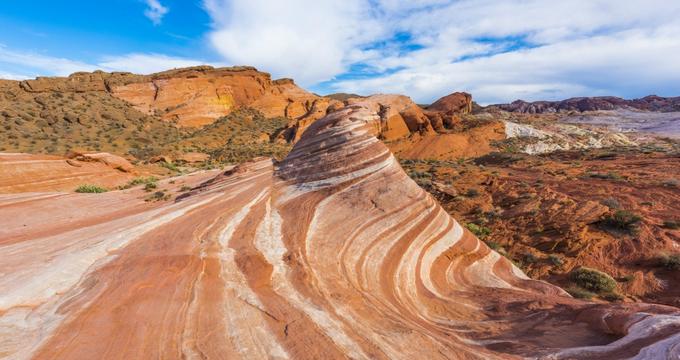 Valley of Fire State Park is located less than 60 miles from Las Vegas, NV in the Mojave Desert. The 35,000-acre park takes its name from the red sandstone formations that seem to be on fire as they reflect the sun’s rays. A 10-mile scenic road runs through the center of the park, connecting the east and west entrances. The road was designated a Nevada Scenic Byway in 1995.

Guests are encouraged to begin with a trip to the Visitor Center, which provides exhibits on the park’s history, flora and fauna, and geology. The park has numerous camping facilities, picnic areas and overlooks that may all be reached by the scenic road. Four wedding ceremony locations within the park include the Seven Sisters rock formations, and the Rainbow Vista overlook.

Typical flora within the park includes cactus varieties such as cholla and beaver tail, as well as desert shrubs. Most of the park’s wildlife is nocturnal, including the bobcat, coyote, jackrabbit and antelope ground squirrel. Lizards and Bighorn Sheep may be seen during the day. The park’s rarest resident is the Desert Tortoise. The protected species is Nevada’s state reptile. Arch Rock is one of the most recognized geological features of the park. The sandstone arch has been carved out by millions of years of wind and rain. Other interesting rock formations include the Beehives, an example of geologic cross bedding in which lines cross the stone in different directions, and Balanced Rock, a stunning balancing act just outside the Visitor Center.

The Cabins are a series of historic sandstone brick cabins made in the 1930’s by the Civilian Conservation Corps (CCC). The site is now a picnic area. A white stone cross atop a brick podium serves as a memorial to John J. Clark. The Canadian immigrated to the United States and served during the Civil War with Company F of the New York Infantry, enlisting in 1862. He was honorably discharged in 1863 after contracting Typhoid fever. In 1915 he headed west, as many Americans did, and stopped in the Valley of Fire to seek water. He died from thirst several days before his body was found underneath his carriage, his horse still tied to the rig.

The park is home to several easy hikes. Mouse’s Tank is a loop just over one half mile long. The trailhead for the easy 30-minute hike is located 1 mile past the Visitor Center. Also known as Petroglyph Canyon Trail, the trail’s common name arose from a Southern Paiute Indian named “Little Mouse” who allegedly hid at Mouse’s Tank in the 1890’s after killing two prospectors. White Domes is an easy 30-minute hike with a trailhead 6 miles past the Visitor Center. The 200-foot increase in elevation offers extraordinary views of the Valley of Fire. An abandoned historic movie set from the 1966 film The Professionals still rests at the bottom of the valley. Atlatl Rock is a 1-mile loop hike beginning just 2 miles from the west entrance. The hike takes visitors past the petroglyphs on Atlatl Rock to a view of Lake Mead at the top. Atlatl is the name of a short cord used for launching a spear. The petroglyphs on Atlatl Rock demonstrate its usage.

History: Valley of Fire State Park was dedicated in 1935, making it Nevada’s first state park. It received National Natural Landmark status in 1968 and is commemorated with Nevada Historical Marker number 150. Many of the park’s main features such as the campgrounds, trails and road were built between 1933 and the mid-1940’s by the Civilian Conservation Corps. The park is familiar to some visitors as the site of several movie sets, including 1963’s Viva Las Vegas starring Elvis Presley. The 1990 film Total Recall starring Arnold Schwarzenegger filmed the outdoor Mars scenes at the park, and Star Trek fans will recognize the park’s silica dome as Captain James T. Kirk’s death and burial site.

Ongoing Programs and Education: Valley of Fire is a popular site for weddings and photo tours, due to the scenic rock formations and vibrant red colors. Photo tours are 90-minute photography sessions with a professional photographer, available through a third party vendor.

What’s Nearby: Valley of Fire is directly adjacent to the Lake Mead National Recreation Area, and is 50 miles northeast of Las Vegas. The closest town is Overton, Nevada, which is 16 miles to the north of the park.

20 Best Things to Do in Carson City, Nevada