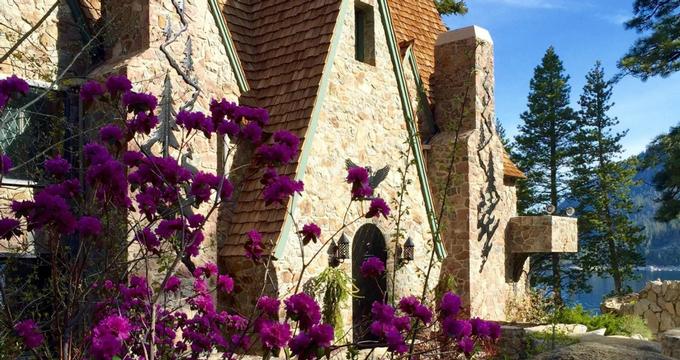 Located in Lake Tahoe, Nevada, Thunderbird Lodge preserves the historic home of famed socialite George Whittell, Jr., operating as a living history home museum for tours and special event rentals. Throughout the late 19th and early 20th centuries, Lake Tahoe became a prominent spot for the construction of summer homes and resort residences by California’s elite. George Whittell, Jr.’s parents, George Sr. and Anna, were among the wealthiest residents of San Francisco at the turn of the 20th century.

Born in 1881, George Jr. became known throughout his young life as one of the American West’s most famous socialites and notorious playboys, noted for his multiple marriages, travels with the Barnum and Bailey Circus, and collections of exotic animals, designer automobiles, and luxury boats. By 1936, Whittell owned more than 40,000 acres of land across a 20-mile region of the Nevada shoreline of Lake Tahoe. That year, Whittell began construction on a residence that would become known as Thunderbird Lodge, designed by prominent Nevada architect Frederic J. DeLongchamps. Throughout the 20th century Thunderbird Lodge earned a reputation as one of the final and greatest examples of prominent high-society homes constructed in the Lake Tahoe region.

Before his 1969 death, Whittell sold much of his land and property in the Lake Tahoe region to the Crystal Bay Development corporation. Following Whittell’s death, the residence and 10,000 acres of property surrounding it was acquired by investor Jack Dreyfus, who later turned much of the land over to the acre of the National Forest Service and the Nevada State Parks service. Following renovations and additions Dreyfus made to the lodge in 1985, the property was sold to the Del Webb Corporation at a cost of $56 million. In 1999, a three-way land exchange was established between Del Webb, the University of Nevada at Reno, and the United States Forest Service. The portion of the land designated to the United States Forest Service was later conferred to the Thunderbird Lodge Preservation Society, which gained ownership of the entire property in 2009 after a major capital fundraising campaign.

Today, Thunderbird Lodge is preserved as a living history home museum and learning center, owned and operated by the Thunderbird Lodge Preservation Society nonprofit organization. The lodge was added to the National Register of Historic Places in 2000 and is part of the Thunderbird Lodge National Historic Site. The site features a heavily-forested terrain populated by mixed conifer trees and shoreline and creek areas with sandy beaches, showcasing a number of large granite boulders.

The main lodge, designed by architect Frederic J. DeLongchamps, serves as a prime example of architectural integration with the surrounding environment, utilizing design principles of natural harmony within its building materials, landscape elements, and surrounding pathways and driveways. More than 3,000 square feet of interior space are contained within the lodge, and a lakeside lawn, gazebo, two patios, and private sandy cove are showcased on its grounds. The lodge is most noted for its Lighthouse Room, which offers spectacular views of nearby Lake Tahoe.

In addition to the main lodge, several other buildings within a six-acre area make up the Thunderbird Lodge National Historic Site, including the home’s original Card House, which is accessible via a tunnel entrance. Whittell’s Elephant House, which formerly housed his pet elephant, Mingo, is heavily embellished with decorative ironwork, sconces, and artistic detail. A Caretaker’s Cottage, Cook and Butler’s House, Admiral’s House, and Gatehouse are also showcased on the property. The lodge’s one-story Boathouse also serves as the home of Whittell’s Thunderbird Yacht, constructed in 1939 and now recognized as one of the most valuable historic wooden speedboats in the United States. As a historic landmark-at-risk, the yacht is maintained by the Preservation Society through chartered yacht cruises and rentals.

Public guided tours of the home and its grounds are offered Tuesdays through Saturdays between May and October, with private tours available by reservation throughout the year. Tours last approximately 75 minutes and elaborate on Whittell’s life and the construction and history of the lodge. All public tours must be reserved in advance, and all participants must wear comfortable walking shoes for grounds exploration. Children under six are not permitted on tours, and smoking is not permitted within the lodge and its grounds.

Thunderbird Lodge hosts a variety of public special events throughout the year, including Winemakers’ Dinner fundraisers, which require advance reservations for all participants. The Thunderfaire Food and Wine Festival showcases fine California wines and gourmet food from chefs throughout the American West Coast, while special Father’s Day and Fall Harvest dinners serve multi-course meals specifically crafted by resident chef Darren Weston. The lodge and its surrounding properties and grounds may also be rented for private special events, including weddings, reunions, and corporate functions. Phone: 775-832-8750

Ireland Things to Do: Muckross House, Gardens, and Traditional Farms