Things to Do in Arizona: Desert Caballeros Western Museum 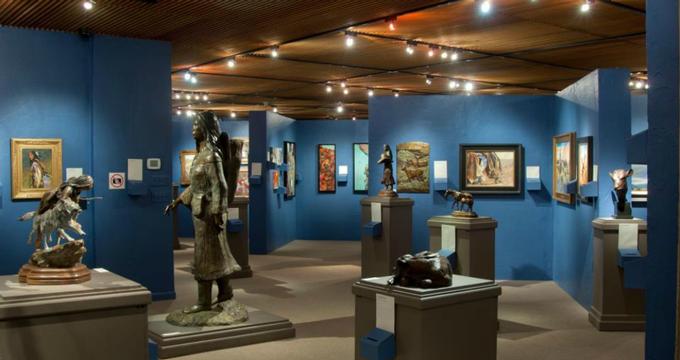 The Desert Caballeros Western Museum in Wickenburg, AZ showcases the art and history of the American West through inspirational exhibits of artwork, educational programming and recreational activities. Permanent exhibits at the museum include the Hall of History Dioramas. Each diorama was created by a team of professional artists and volunteers, and each showcases an episode or theme in the history of Wickenburg and the surrounding area. Subjects include the daily chores of Hohokam farmers, ranch life and the dude-ranch life, working conditions in mines, the arrival of railroads and the first paved highway, and Wickenburg’s glider training program during World War II.

In addition to the dioramas, the museum has several life-sized reconstructions that duplicate scenes from history, including a Wickenburg Street Scene, and a Western Town scene. The scenes include a general store stocked with hundreds of period artifacts, a saloon, post-office, watch-repair shop, church and private home. Out on the Ranch is a reconstructed period ranch home representative of the 1920’s. The home includes a corral and covered wagon. The exhibit showcases the daily life of early settlers to Wickenburg. A Gem and Mineral Display showcases the famous “Five C’s” of Arizona; copper, cattle, corn, citrus and climate. Items in the display come from area mines around Wickenburg and include gold, silver and turquoise as well as hematite, jade, jasper and chalcedony. The American Indian Art and Artifacts Display includes leatherwork, beadwork, basketry and other artifacts which teach the history of the tribes in the region.

History: The Museum was founded in 1960 to display exhibits related to the western heritage of the town of Wickenburg. Wickenburg began as a small mining camp in 1863 when Henry Wickenburg founded the Vulture Mine. The museum opened in 1969 in the historic former Brayton’s Commercial Company building, however in 1972, a fire completely destroyed the building and its contents. After several years of fundraising, the museum reopened in 1975, and added an additional 6,000 square feet in the 1980’s. The museum continued to grow over the years and received full accreditation from the American Association of Museums in 1996. Significant gifts in the 2000’s allowed for the addition of the Charles T. Klein Pavilion, the Cross Cultural Learning Center, and the Quayle Family Gallery. In 2013, the museum acquired the adjacent property block to allow it to further expand.

Ongoing Programs and Education: The museum offers self-guided tours as well as docent-led tours for groups of 8 or more. Youth programs at the museum include school group tours. Culture Path is a 4th grade field trip curriculum which includes education in the area of history and Native American culture, biology and geology, as well as hands on activities such as panning for gold, identifying native plants and minerals and creative writing. Programs are held at the museum’s Boyd Ranch as well as the Desert Caballero Museum. The museum hosts summer camps for kids and a children’s cowboy poetry contest. The annual poetry event is held each December and teaches over 1,000 local school children about the history of cowboy poetry. Adult programming includes an author’s series that hosts monthly book club discussions. Tuesday Talks invites historians to speak on subjects related to current temporary exhibits and art shows. The Hassayampa Lecture series more specifically focuses on the history of the Wickenburg region.

Art workshops for adults offer multi-day hands-on programming and frequently invite artists who show at the museum to teach sculpture, painting and more. Desert Adventure Tours are day-long Jeep tours of the historic Wickenburg mining areas and ghost towns, led by a museum docent. The museum also offers self-driven tours to pick saguaro cactus when in season. Cowgirl Up! is an annual month-long event that’s been held at the museum for over 10 years. The show invites female artists who represent the American West to show and sell their paintings, drawings and sculpture at the museum. The 2018 show will represent 58 artists, chosen by jury through a selection process. Fiesta de Septiembre is a family event which takes place each September. In partnership with the Wickenburg Chamber of Commerce, the museum gathers and displays local Hispanic family trees and oral histories. A Kids Zona during the festival offers hands-on arts and crafts programming.

Past and Future Exhibits: A new exhibit in the Quayle Family Gallery, ‘Wickenburg’s West: Adaptation/Reinvention/Transformation’ marks the 150th year anniversary of the town of Wickenburg. Items in the exhibit include artifacts and photographs on loan from private donors, the Phoenix Museum of History and Tempe Museum of History as well as items from the Desert Caballeros Museum’s permanent collection.

What’s Nearby: The Boyd Ranch is a 160-acre ranch surrounded by public land just 12 miles north of downtown Wickenburg. The ranch was donated to the Desert Caballeros Museum in 2004. The ranch may be reserved for recreational group usage, trail riding, and mule rides.

Things to Do in Phoenix, Arizona: Tovrea Castle