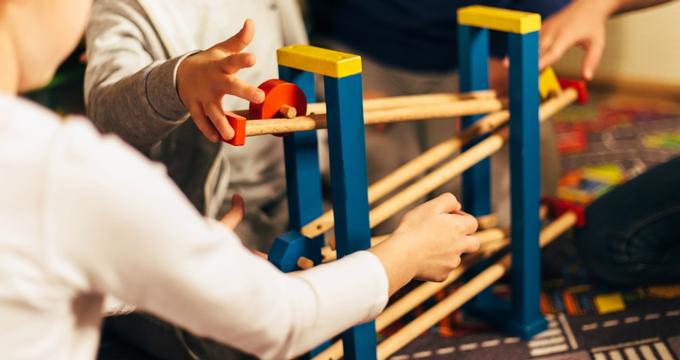 Located in Carson City, Nevada, the Children’s Museum of Northern Nevada presents a variety of hands-on exhibits for children and families, focusing on STEM, civic engagement, and arts principles. The Children’s Museum of Northern Nevada was incorporated as a private nonprofit institution in 1988 and opened a small public museum facility within the Nevada State Museum in 1991.

In 1994, the museum relocated to the restored former Carson City Civic Auditorium building, debuting more than 30 hands-on exhibits within a 4,000-square-foot gallery space. The museum’s lower level was remodeled into an office, meeting room, and workshop facility in 2000, with additional facilities added in 2010. In 2012, major renovations to the museum’s exhibit space were completed, allowing for the addition of a STEM-focused exhibit area in 2013.

Today, the Children’s Museum of Northern Nevada is operated as a private nonprofit educational facility, offering a variety of hands-on exhibits for children and families. The museum’s exhibits emphasize play-based learning environments to introduce arts, sciences, and humanities principles and foster continued learning experiences for community members, with a focus on engaging children and families from diverse socioeconomic backgrounds within the region. Since 2003, the museum has been voted as the area’s top family and children’s tourist attraction by the readers of the Nevada Appeal.

A variety of civic-focused exhibits are offered on the museum’s first floor, including a Train Simulator and Train Table emphasizing engineering and transportation principles. Several exhibits reconstruct child-sized replicas of regional facilities, including the city’s Capital Building and Carson City Jail. Civic engagement and adult professions are introduced through a number of other replica storefronts, including an Ole Music Shoppe, a Hospital Room, a Schoolhouse, and the Jamieson’s Country Café and Grocery Store. Nature is examined in a Wildlife Exhibit, and several exhibits focus on dinosaur themes, including a preschool safe play area. Free play is also offered on a Children’s Stage and with play equipment such as a Rotating Climbing Wall, an Airplane Teeter-Totter, and Climbing Tubes.

The museum’s STEM Room, opened in 2013 on the facility’s lower level, was designed with the assistance of the Carson City Chamber Leadership Class of 2013. A variety of individual learning centers are showcased throughout the exhibit, focusing on biology, nutrition, and physics principles. Nature-focused exhibit areas include Traditional and Aquaponic Greenhouses, a River Tank, and activity areas allowing children to create animal rubbings and identify types of rocks and butterflies. Exhibits introduce a variety of scientific principles, from the workings of the human body to the structure of the solar system and the identification of cloud types and patterns. A hands-on math problem solving area introduces children to basic math principles using the animated fictional character Little Foot, while fractions, measurement, and balance and scale principles are emphasized at individual stations. Physics principles are introduced through free play with unicubes, MARBLEWORKS toys, Lincoln logs, snap circuits, gears, and cogs. Stations also allow children to construct miniature bridges, test simple machines, and try their hand at a flight simulator.

A Children’s Museum Gift Shop offers affordable gift items for children and families, with most items priced at under $20. Children’s educational activity kits are sold, including model train sets, crystal growing kits, and arts and crafts kits. A variety of other toys are also available, including books, multimedia items, and children’s musical instruments.

A variety of educational programming is presented for museum visitors and community members, including Saturday and Sunday arts and crafts workshops and Tuesday and Thursday afternoon storytime events. Preschool afternoon storytime events are hosted by Beverly Vugteveen and explore a variety of themes connected to children’s literature works through music, puppetry, and art projects. Storytime programs emphasize child-guardian bonding experiences and social engagement for program participants. Free First Friday events with rotating event themes are offered monthly, and a bi-monthly yoga program is offered for mothers.

Museum volunteers ages 16 and older are accepted on an ongoing basis for a variety of museum tasks, including weekly docents, special event staff, office needs, and technical volunteers for the construction and maintenance of exhibits. Local corporations interested in becoming Sponsors of the Month for the museum should contact the museum directly via phone or email. The museum’s facilities may also be rented for private special events, including rental of its three conference and workshop rooms for educational, business, or personal events. Rentals of the museum’s Dunk Tank and Star Lab indoor planetarium projector are also available for use at community special events and in the classroom, with deposits and waivers of liability required as part of all rental agreements.

More Things to Do in Carson City