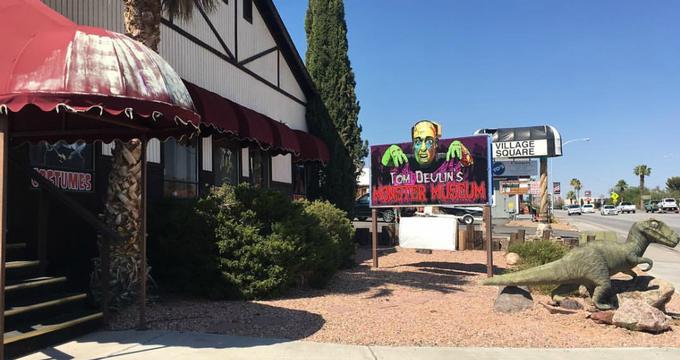 Located in Boulder City, Nevada, Tom Devlin’s Monster museum displays the artistic creations of makeup special effects artist Tom Devlin of special effects company 1313FX, which have been featured in a number of film and television programs, including The X-Files, CSI: Miami, and the SyFy reality series Face Off.

Tom Devlin was born in East Stroudsburg, Pennsylvania and developed a love for horror and animated movie monster characters such as He-Man and the Teenage Mutant Ninja Turtles at a young age. As a self-taught artist, Devlin studied classic horror and animated films and television series and began work as a makeup effects artist in his late teens and early twenties. As the owner of 1313FX, he received national attention for his character makeup design work in the hit television series The X-Files and has worked as a professional makeup effects artist for more than 100 feature films and series, including CSI: Miami, Daredevil, and Sand Sharks. Devlin’s creations are primarily created out of latex and focus on elements of horror, fantasy, and trauma. He was a contestant on the 2011 SyFy reality competition series Face Off, which pitted makeup effects designers against one another in artistic challenges, and crafted lines of Halloween masks for Haunted Attractions between 2010 and 2015. In July of 2017, Devlin opened a museum in Boulder City, Nevada for the display of his artistic makeup and costuming creations.

Today, Tom Devlin’s Monster Museum is operated as a combination costume shop and artistic museum, showcasing pieces from Devlin’s body of monster and makeup creations and costumes. The museum’s exterior highway display features a Frankenstein-esque likeness of Devlin along with a purple hearse, dinosaur sculpture, and zombie Spider-Man likeness. Through its operations, the museum strives to preserve the history, art, and industry of special makeup effects through a variety of exhibits and displayed artifacts.

1,000 square feet of exhibit space are showcased throughout the museum, with planned gallery space expansion in development as of 2018. A wide variety of props, costume pieces, and makeup effects designs created by Devlin are on display throughout the museum, including pieces from productions by his Full Moon horror productions such as Gingerdead Man. Characters from Devlin’s productions on display include villains from the films Slumber Party Slaughterhouse and Ed Gein, as well as his iconic Poultrygeist character. Devlin’s personal collections of Teenage Mutant Ninja Turtles and He-Man characters are also presented in exhibit displays.

Full-scale models of horror and fantasy characters such as Michael Myers, the Killer Klown Gang, and Evil Dead Ash are displayed, along with horror-industry artifacts such as Andre Toulon’s trunk, Leatherface’s chainsaw, and a full-size Ridley Scott Alien punch fountain. Likenesses of horror legends Vincent Price and Bela Lugosi are also displayed, along with a likeness of Michael Jackson from his Thriller music video and a motorized Cryptkeeper figure that is displayed at the museum’s entrance. Information on the filming of the feature film Puppet Master: Axis Termination at the museum’s premises is also provided.

A variety of public special event programming is offered by the museum, including Saturday movie night events showcasing classic and contemporary cult favorite horror and fantasy films such as House of Wax and Tourist Trap. Themed movie marathons are also shown as part of the museum’s Monster Movie Squad event series. Periodic meet-and-greet and autograph signings are held at the museum with prominent makeup effects artists and horror industry figures such as Felissa Rose.

Annual holiday special events at the museum include a My Bloody Valentine Ball, which encourages visitors to come in costume as their favorite slasher or horror movie victim characters and compete in an open costume contest. Digital copies of fake prom photos are also offered at the school-dance-themed event, as well as complimentary refreshments and ticket access to the museum’s exhibits. During the Halloween holiday season, a haunted house attraction is presented at the museum, and special rates for Halloween costumes are offered at the museum’s costume shop. A Christmas event is offered during the winter holiday months, allowing visitors to meet and greet with Dr. Seuss’ iconic fictional character The Grinch and receive discounted museum admission.

More Things to Do in Boulder City

Things to Do in Portland: Oregon Museum of Science and Industry

Things to Do in PA: Pittsburgh Zoo & PPG Aquarium

Things to Do in Dallas: Nasher Sculpture Center