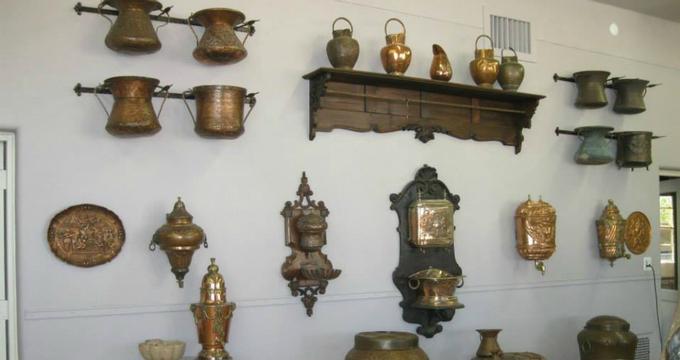 The Arizona Copper Art Museum is located in the small, former mining town of Clarkdale, Arizona, which is now known as a destination for artists and retirees. The museum collection of over 5,000 pieces takes visitors on a visual history of copper and its relevance in America. Items from the collection focus on works of art from the United States and Western Europe from the 1500’s to today. A museum visit begins with the Historical Information Collection.

This exhibit displays art and artifacts related to the history of copper, when it was discovered, and its use for tools, weapons, art and pigment. Arizona, known as the Copper State, is the largest producer of the metal in the U.S. The exhibit explores myths, symbols and the mysterious properties of copper. The Military Art, or Trench Art Collection exhibits examples of copper use in weaponry, and decorative wartime artworks. Trench art was a form of carving done on spent shell casings by soldiers during downtime between battles throughout World War I and II. The decorative carvings sometimes memorialized battles or leaders, and acted as souvenirs for families and loved ones. An Art and Architecture Collection showcases the uses of copper in decorative arts, along with its alloy, bronze. Copper has been commonly used as decorative architectural molding, bronze has a rich history of use for sculpture, and brass for casting. A Religious Art Room provides examples of how copper has been used as a decorative element in religious buildings and spiritually inspired works of art such as icons and sacred figurines. The Kitchenware Collection displays examples of copper cookware used historically over open fires, and also in today’s kitchens.

Copper has been used in food storage, and the washing of dishes and laundry. Copper’s superior uniform cooking capabilities have made it the preferred choice of chefs for hundreds of years. The museum’s collection includes samples of cookware, bakeware, and candy making forms. The Drinkware Collection demonstrates the history of copper as a popular vessel for drinks. Although copper has been replaced by glassware and ceramics in most contemporary households, many water pipes in homes are still made from copper, which aids in the sterilization of the water. New to the Drinkware Collection is a 16-inch copper wine jug from the 1600’s. The nearly 2-gallon pitcher from Tuscany in the Northern Italian wine region is highly ornate with a decorative flora and fauna motif. A Distillery and Winery Collection displays the copper vessels and tools used for making beer and wine and spirits. The use of copper stills was popularized in the 1800’s during prohibition. Copper stills assist in the removal of sulfur-based components from alcohol.

History: The 9,000 square foot Copper Art Museum opened in Clarkdale in 2013, but traces its roots back to 1919 when the first known antique shop opened in Minnesota, displaying copper wares. The collecting of copper items grew in popularity in the United States from the 1960’s through the 1990’s. The Clarkdale location was chosen for its history as a smelter town for the nearby copper mines in Cottonwood and Jerome, Arizona. The Clarkdale smelter operated from the early 1900’s through 1953. With its beginnings as a company town, Clarkdale is one of America’s first planned communities and Old Town Clarkdale, where the museum is located, is on the National Register of Historic Places. Today, the mission of the museum is to collect, display and study copper creations from the 16th through 21st century with the intent of inspiring and educating visitors. In 2017, the museum was nominated for a Governor’s Arts Award in the Small Business Category. The award honors those who have demonstrated significant support of the arts in Arizona.

What’s Nearby: Copper Mountain Antiques, the museum’s gift shop, is located 4 miles away in Jerome, Arizona, home of the historic copper mine. The scenic route 89A connects the three towns of Jerome, Clarkdale and Cottonwood. Today, the three historic towns are known for their arts communities, and tourism is the main industry. Annually, over 250,000 visitors pass through the three small towns, which themselves have a collective population of fewer than 20,000.