Things to Do in Houston, TX: The Menil Collection 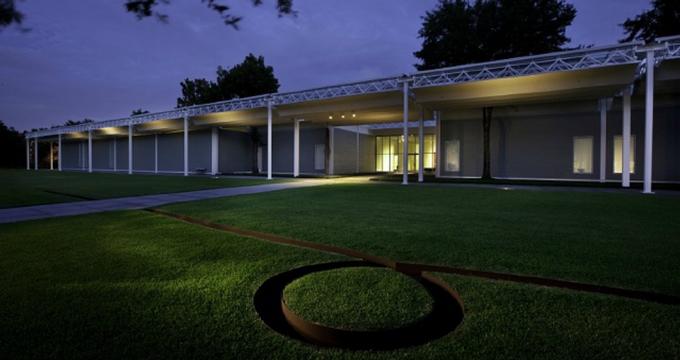 The Menil Collection is a 30-acre art museum in Houston with a permanent collection as well as special exhibitions housed in the main building. This building anchors three others that help make up the museum campus. Two of these are dedicated to artists Dan Flavin and Cy Twombly, while the third one is for year-long installation projects. The displays found throughout the museum allow the artwork and objects to speak for themselves. There is no media to explain the art in the galleries and visitors will find no instructive information on the walls. The idea is to foster a personal, direct encounter for each individual guest. The Menil Collection is free to visit and is open from Wednesday to Sunday.

The museum's collection of African art includes more than 900 examples of metal and ceramic objects, textiles, sculptures, and masks. This gallery showcases visual traditions from Africa's central and western regions and includes sculptural arts and masks of the Senufo, Dogon, Dan, Bwa, and Baule peoples of West Africa as well as sculptures and masks in ivory and wood from the Lega, Kuba, and Kongo peoples of Central Africa. The Arts of the Americas and the Pacific Northwest collection features over three hundred objects from ancient civilizations of South America and Central America as well as from the native peoples of North America's Pacific Northwest region.

The Menil Collection's Arts of the Ancient World includes paleolithic objects and artifacts from the ancient Egyptian, Mediterranean, and Near Eastern civilizations. With approximately 600 objects, this collection spans a timeframe of 20,000 years. The oldest item in the collection dates back to around 15,000 to 9,000 BCE and is an Upper Paleolithic fragment of an implement made of bone. Also featured are stoneware and marble figures from the Cyclades Islands, ancient Greek and Roman ceramics, and bronze votive figurines from the Near East and the eastern Mediterranean. Musical instruments, utilitarian and ceremonial objects, architectural elements, and masks from the Pacific regions of Polynesia and Melanesia are all featured in the Menil Collection's Arts of the Pacific Islands collection.

The museum’s most significant holdings from before the 20th century are its Byzantine artifacts and artwork. The Byzantine collection consists of more than 1,000 everyday items. There is also a gold reliquary from Macedonia, most likely from around the year 500 CE, a bronze censer from around the 7th to 10th century that depicts New Testament scenes, and a silver paten displaying the Communion of Paul and Peter from the 7th century.

Modern artwork is at the heart of the Menil Collection. There are many examples of surrealism among the pieces in the collections, including drawings, sculptures, and paintings. Visitors can also get a glimpse of early modern pieces by artists such as Pablo Picasso, James Ensor, and Georges Seurat. Prominent post-World War II pieces are also showcased in the works of Jean Dubuffet, Jean Fautrier, and Fernand Léger. Artists of the Paris-based nouveau realism of the 1950s and 1960s are also represented in the Menil Collection.

More Family Things to Do in Houston

Abilene, TX Things to Do: The National Center for Children’s Illustrated Literature