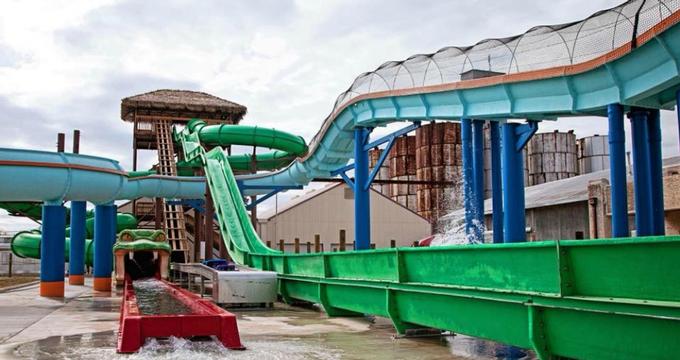 The park was constructed on the site of a former agricultural and grocery center facility, which contained buildings for grain silos, meat processing, and other agricultural warehouses. All indoor attractions repurposed existing structures, incorporating features of warehouse buildings and historic artifacts into ride and public space designs. Five indoor attractions, including a video game arcade, were offered at the park’s opening in March of 2007. The following season, a multi-level go-kart track was added, and in 2011, a water coaster became the park’s first outdoor water ride. In 2014, the park announced its intention to construct a wooden shuttle roller coaster manufactured by the Gravity Group, themed with locomotive train cars to honor the park property’s history.

Today, ZDT’s Amusement Park is a 10-acre family amusement park facility, offering a variety of indoor and outdoor rides and attractions. The park is operated year-round, with the exception of its water rides and water park area, which are open from March through September. Admission wristbands are available for full ride and attraction packages and for video game arcade access, with free admission offered for visitors not participating in park attractions with the purchase of another visitor’s admission wristband.

The park’s newest attraction is its Switchback Roller Coaster, opened for the 2015 season. The custom-designed coaster, manufactured by the Gravity Group, is the only modern wooden shuttle roller coaster in the world, featuring a 58-foot drop and a 104-degree overbanked turn. The roller coaster navigates various design elements before ascending its 87-degree Grand Spike and then sending riders backward through the track’s course again. The ride, which reaches maximum speeds of 40 miles per hour, is designed in honor of the 1884 Switchback Railway.

Several park attractions incorporate elements of former agricultural warehouse buildings, including the 60-foot Silo Climb climbing wall, which is the tallest auto-belay climbing wall anywhere in the world and was constructed over the facade of the property’s silos. An indoor section of the park’s ThunderVolt Speedway GoKarts attraction, which offers button-activated turbo boost technology for fast acceleration along a multi-level track, runs through the property’s former grain warehouses. The park’s water park walkway is constructed over Switchback Railway railroad tracks and showcases an original Santa Fe executive train car.

Active attractions at the park include a 25-foot vertical Rock Climbing Wall, themed after ruins of the Mayan civilization. All climbers are harnessed for safety and must wear shoes with backs to enable secure footing. A Trampoline Thing allows riders to jump up to 24 feet into the air and maneuver forward and backward flips, while a Jungle Playground is the state’s highest indoor playground. Two full video game arcades are also offered within the park’s Main Building Arcade and Rock ‘N Roll Arcade, offering games such as Guitar Hero, Galaga, Centipede, and Time Crisis 4. Game play ticket redemptions may be exchanged for prizes at the park’s redemption center. Standard American fare is served at Danielle’s Kitchen, and a Midway Outdoor Seating Area and Water Park Pavilion offer seasonal outdoor picnic seating.

In addition to standard visitor admission, group rates are offered for small groups and organizations, including school groups, church groups, scouting groups, and community organizations. All group rates must be booked in advance by contacting the facility directly via phone or email. Facility rentals are offered for large groups over 100 up to 2,000, such as corporate picnics, private school field trips, or large parties. Birthday party packages are offered for young visitors wishing to celebrate their birthdays at the park, with several package levels offering ride wristbands, food and beverages, and scheduled time in a private party room.

Back to: Best Amusement Parks in Texas