Things to Do in Houston, TX: 1940 Air Terminal Museum 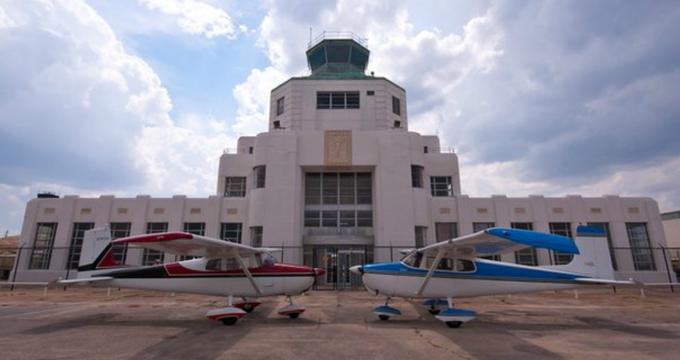 The 1940 Air Terminal Museum is located at the William P. Hobby Airport within the original art deco building of the Houston Municipal Airport. Showcasing the heritage of civil aviation, the museum features exhibits on the interesting history of aviation in Houston as well as general aviation, business aviation, and the airlines. Visitors will also have the opportunity to get a front-row view of the diverse airport operations of Hobby Airport when visiting the museum.

An air show is offered every day, in between the rotary wing and fixed wing general aviation traffic, business aviation, and airline traffic. The 1940 Air Terminal Museum occupies the entire space of the historic terminal's ground floor. Still pending is the restoration of the terminal's upper floors, including the tower cab and the observation decks. The museum campus has now grown to also include the recently restored 1928 Carter Field Airmail Hanger.

The 1940 Air Terminal Museum consists of many galleries with cases displaying aviation memorabilia, such as models, photographs, documents, and silver service items. While the terminal building of the museum is air-conditioned, the 1928 Carter Field Airmail Hangar's bay is not. Visitors can watch a film about aviation in the museum's theater or sit and watch the airplanes just outside the terminal building.

Field trips and guided tours led by docents are offered at the 1940 Air Terminal Museum on weekdays. The 1928 Carter Airmail Hangar can only be explored through a tour on a weekday or every third Saturday, as the hangar isn't usually open on weekends. School groups should contact the museum for available dates, times, and rates and are advised that there should be a chaperone for every five children.

The 1940 Air Terminal Museum is a great place for plane spotting and both aviation enthusiasts and plane spotters are generally welcome at the museum. The parking lot of the museum provides an excellent space for watching everything going on at Hobby Airport, beside the original terminal that was the start of it all. The museum prefers visitors to let its staff know if they will be heading outside for some plane spotting and for around how long they'll be outside the museum building. For visitors interested in plane spotting at Hobby Airport, and other airports in the area, HoustonSpotters.net is a good source of information. The site provides information about past and upcoming events, a picture database, and other useful information about plane spotting.

The 1940 Air Terminal Museum is managed by the Houston Aeronautical Heritage Society, a non-profit corporation created to preserve, promote, and research the aeronautical heritage of Houston and the southeastern region of Texas. Founded in 1998, the society is made up of a diverse group of enthusiasts of aviation, history, and architecture. The museum is the central project of the Houston Aeronautical Heritage Society. The restoration of the Houston Municipal Airport Terminal is being done in phases for the City of Houston, changing the terminal into an interactive museum that showcases the importance of civil aviation for the Houston area since the beginning of manned flight.

More Things to Do in Houston

Things to Do in San Antonio, TX: Magnolia Pancake Haus