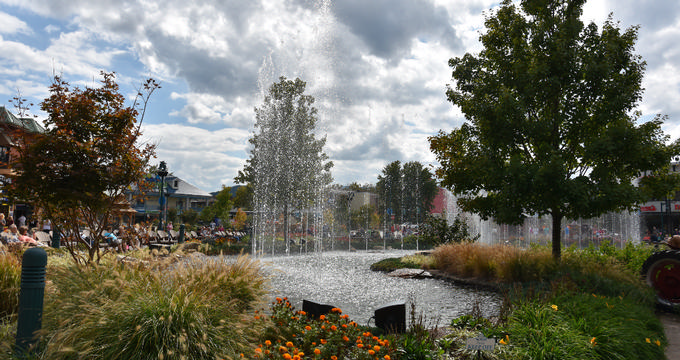 Located in Sevier County, Pigeon Forge is one of the most popular mountain resort towns in the state of Tennessee. It's located in the eastern part of the city and is typically quite a sleepy town, with less than 10,000 permanent residents. However, due to its proximity to many natural and man-made locations, Pigeon Forge attracts millions of additional visitors each and every year and is regarded as one of the top tourist destinations in all of Tennessee.

Pigeon Forge is a wonderful place to visit for nature enthusaists and people who like to spend time in the great outdoors, being just a few miles from the Great Smoky Mountains National Park. Lots of fun outdoor activities can be enjoyed around the Pigeon Forge area like kayaking, hiking, camping, and fishing. Pigeon Forge is also a popular place to visit due to its proximity to the Dollywood theme park and Dollywood's Splash County water park, two major family-friendly tourist attractions owned by country music legend Dolly Parton herself.

As the home of Dollywood, Pigeon Forge attracts a lot of country music fans and visitors of all ages, and is also the site of many other attractions like the Smoky Mountain Opry, Comedy Barn Theater, Titanic Museum, Alcatraz East Crime Museum, Southern Gospel Museum and Hall of Fame, WonderWorks Children's Museum, NASCAR Speedpark, and Hollywood Wax Museum. Pigeon Forge also hosts a lot of live entertainment including many car and truck shows, as well as country music concerts.

If you’re planning a trip to Pigeon Forge, Fun Time Trolley system, which is technically a network of buses that have been stylized to look like old-fashioned trolleys. There are currently over 40 trolleys operating in the Pigeon Forge area, offering an easy and convenient way for residents and tourists to get around. So if you’re visiting Pigeon Forge, leave your car at the hotel and make use of the Pigeon Forge trolleys to visit the major landmarks and attractions of this Tennessee resort town.

The fares are cheap and the trolleys run very regularly along six different routes all year long. All of the trolley routes begin at the Trolley Station, which is located on Old Mill Drive in the Old Mill District, so this is a good spot to start your journey. The Pigeon Forge trolleys run almost all year long, specifically from early March through to the end of December. There is no trolley service in Pigeon Forge on Thanksgiving Day, Christmas Eve, and Christmas Day.

If you plan on riding the Pigeon Forge trolley, it can pay to know the fares in advance. The trolley drivers will only accept exact change, so it's good to have an idea how much you need to pay before you climb on board. Firstly, it's important to note that all children aged 3 and below do not need to pay to ride on board the Pigeon Forge trolleys.

All other passengers must pay a fee, with fares starting as low as $0.50 for certain routes. For example, if you'd like to go to Dollywood or Dollywood's Splash Country, you'll only have to pay 50 cents. Five of the six Pigeon Forge trolley routes feature one-way tickets at just 50 cents, but the Gatlinburg Welcome Center route costs 75 cents instead.

At the moment, there are six routes on the Pigeon Forge trolley system, offering service to the area’s major attractions and even into neighboring towns like Gatlinburg. Here are the names and basic details of the six routes:

- North Parkway - This route heads around the northern section of Pigeon Forge and into the city of Sevierville. It calls at several malls and shopping areas along the way like the Tanger Outlet Center at Five Oaks and the Sevierville Wal-Mart.

- South Parkway - As the name indicates, this route goes around the southern part of the city and mostly goes along Pine Mountain Road. It visits several campgrounds in the area and passes by some key attractions like the Dixie Stampede.

- Dollywood - The Dollywood route simply and quickly takes you from the Old Mill area of Pigeon Forge across to the Dollywood theme park. It starts running half an hour before the park opens, allowing you to be at the front gates right on time to make the most of your day, and operations continue into the evening to help bring guests of the park back home.