Things to Do in Franklin, Tennessee: Carnton Plantation 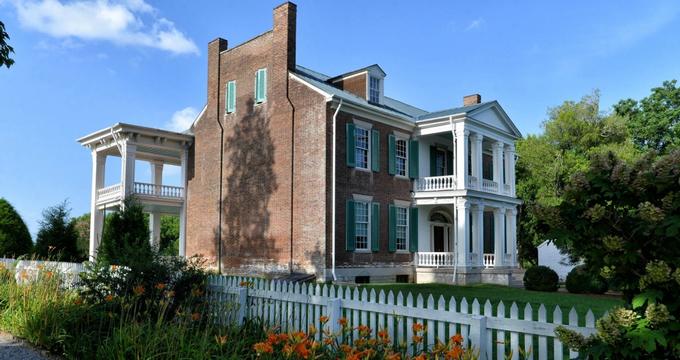 The Carnton Plantation is a piece of living Civil War history. Visitors to the grounds can walk through the historic home, visit the graves of many confederate soldiers, and take in the enormity of the history of the battle that happened here. The Carnton Plantation was built in 1826 in Franklin, Tennessee by Randal McGavock. The premises have been visited by many important political figures, like President Andrew Jackson.

The home was inherited by Randal’s son, John, when Randal died in 1843. In 1864, the battle called the “bloodiest” in the entire Civil War occurred just outside the grounds. Called the Battle of Franklin, it lasted just around five hours but led to almost 10,000 soldiers being killed, considered missing, wounded, or captured. The majority of those soldiers were from the Confederate side. The cemetery was commissioned and maintained by the McGavock family in 1866 and is currently the biggest privately owned military burial ground in the US.

The main attraction when visiting the plantation is taking the house tour. It is offered on a daily basis, with an admission fee charged for adults and a discounted admission fee for children between the ages of 6 and 16. Children under 6 are admitted free. The house tour lasts about an hour and includes a map as well as access to the outbuildings, family cemetery, garden, and grounds. Tours are operated Mondays through Saturdays from 9am to 5pm and Sundays from 11am to 5pm. However, most guests choose to spend an additional half an hour to an hour exploring on their own after the tour as well.

Reservations for tours must be made at least two days in advance. Group tours are available for groups of larger than 10 people, which includes a discounted group rate. However, these tours are not considered private tours.

The interior of the house was remodeled in 1847 in the Greek revival style, and updated with the current fashion at the time in terms of wallpaper and carpeting. There is an original clock on the mantel in the parlor, as well as a 200 piece dining set made out of china that also came from the 1800s. Guests should also make sure to notice the stains on the floor, most of which are from when the home was used as a hospital during the Civil War during the Battle of Franklin.

Guests should also visit the cemetery, located on the northwest side of the plantation home. It is organized by the state that the soldiers who were killed came from, separated by a pathway.

Make sure to abide by the site policies when visiting the plantation. No photography is allowed inside the historic houses or exhibits. This includes photography with selfie sticks, tripods, or monopods. Drones and similar technology are also not allowed, except with prior approval. However, photography sessions are allowed if scheduled in advance. These sessions often include graduation, engagement/wedding, family, and prom portraits and are scheduled in two hour time slots. There is a fee when the sessions are performed during business hours, and an increased fee for those performed after business hours.

Smoking is not permitted.

Field trips and student tours of the plantation are welcome. Requests, reservations, and questions can be made on their website or by calling the staff directly. Homeschool groups are also included in the student discount group, provided they reach the minimum amount of students (ten). There is a cost required per student, which increases as the grade level goes up. Teachers are free, but adult chaperones are required to pay full price.

Make sure to arrive at least a few minutes prior to the field trip and payment must be made at the time of the tour (if not before). There is plenty of space for bus parking. School groups will be divided into 30 students or less and guided through the house and grounds by a knowledgeable tour guide that will teach the students about the history of the grounds and the battle. Students will be allowed to visit the gift shop after the field trip as well, as long as they are chaperoned.

While no official dining options are available, picnic lunches are welcome at the outdoor space on the grounds. Make sure to bring blankets to sit on, if desired, and trash bags to collect all refuse. There is also a gift shop available on the premises, which sell a selection of merchandise including apparel, books, and other memorabilia related to the grounds and the Civil War.

More Things to Do in Franklin