Best Things to Do in Myrtle Beach: Wheels of Yesteryear 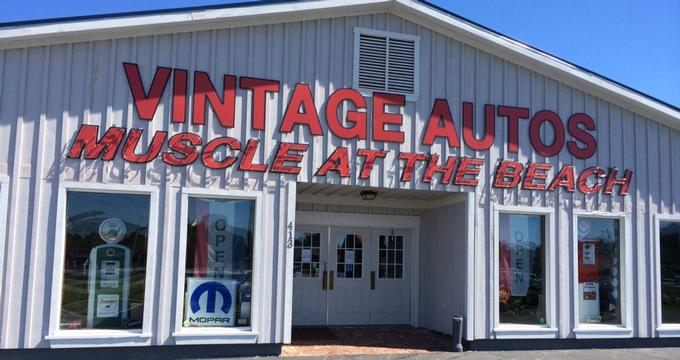 Located in Myrtle Beach, South Carolina, Wheels of Yesteryear showcases historic vehicles from the private collection of Paul and Carol Cummings, displaying more than 100 restored vintage American-made cars and trucks. The Wheels of Yesteryear museum was the vision of North Carolina residents Paul and Carol Cummings, who amassed a large collection of classic American-made vehicles from the 20th century.

The museum’s collections were the culmination of more than 45 years of car collecting by the Cummings, who restored many of the collection’s rare and vintage automobiles, trucks, and other vehicles. Most original VIN numbers were preserved during restoration, allowing for authentic representations of the vehicles as they appeared during their operation. In 2009, the Cummings opened the Wheels of Yesteryear museum to the public, and over the following decade, the museum became one of Myrtle Beach’s premiere cultural tourist attractions.

Today, the Wheels of Yesteryear museum showcases more than 50 vehicles from the Cummings’ private collection at any given time, with new vehicles from the permanent collection rotated in every January for exhibit variety. The museum is located along Myrtle Beach’s Highway 501, next door to the Myrtle Beach Speedway racetrack, which hosts the annual NASCAR Whelen All-American Series. The museum is open daily, with the exception of major national holidays and winter off-season exhibit rotation times, and is free for young visitors under the age of 7 with the purchase of an adult ticket.

Notable holdings at the museum include a 1960 Buick Wildcat convertible, one of less than 1,900 of its variety every produced and commonly referred to in the mid-20th century as the “business man’s muscle car,” and a 1955 Dodge Stepside Pickup truck, an early prototype model using V-8 engine technology, featuring a rare 313-cubic-inch motor. The museum’s 1971 Plymouth "Hemi" 'Cuda convertible is another example of a rare American vehicle, only produced by Plymouth for the 1970 and 1971 model years, showcasing automatic transmission technology and bucket and console seating. A 1969 Mercury Cyclone CJ utilizes NASCAR-regulation technology, including a 428-CJ-cubic-inch V-8 engine, and a 1963 Split Window Corvette Stingray, one of the few remaining instances of the model, features knock-off wheels and a unique split-window configuration. A vehicle used in the film Joe Dirt is also displayed, on loan to the museum indefinitely.

Other exhibits within the museum focus on automobile memorabilia, showcasing vintage car photographs, recovered signs, antique gas pumps, and other artifacts related to 20th-century automobile technology and industry. The museum’s gift store offers an extensive selection of die-cast automobile collectibles, along with a variety of transportation-themed apparel and souvenirs. A variety of annual events are presented at the museum, including a Run to the Car Show and a summer Cruise-In, which offers trophies for classic and modern car entries, along with a variety of special themed awards for paint jobs, interiors, and club projects.

In addition to Wheels of Yesteryear, a variety of automobile and racing-themed attractions are offered in the Myrtle Beach area, including the Myrtle Beach Speedway, located next door to the museum. Constructed in 1958 as Rambi Raceway, the track was acquired by the Speedway Group, Inc., in 2012 and features a NASCAR Racing Experience tourist attraction. The Speedway’s racetrack is a 0.538-mile oval asphalt track which has served as a training ground for some of NASCAR’s most notable athletes, including Jeff Gordon and Dale Earnhardt Jr., and is currently the home for the NASCAR Whelen All-American Series, which runs races February through November. Other major annual races at the track include the Myrtle Beach 400 and the IceBreaker 200. Myrtle Beach is also the host of the annual Mopar Week festival, which celebrates the history and vehicles of the Chrysler Corporation through events at a variety of local venues.

As a major tourist destination along the Atlantic Coast in the American Southeast, Myrtle Beach offers a variety of family museums and attractions, including the North Myrtle Beach Area Historical Museum, which documents the area’s history from its indigenous tribes through the present day. The South Carolina Civil War Museum showcases uniforms, weapons, and other artifacts from the American Civil War, and the Myrtle Beach Colored School Museum documents the history of school segregation and integration in South Carolina during the mid-20th century. A number of art and cultural museums are located near the city’s Grand Strand area, including the Franklin G. Burroughs-Simeon B. Chapin Art Museum and Brookgreen Gardens. Other family museums include the Children’s Museum of South Carolina, Broadway at the Beach’s WonderWorks, Ripley’s Aquarium, and the Hollywood Wax Museum.

Things to Do in South Carolina: Charleston Tea Plantation

Best Things to Do in South Carolina: Wampee Stables