Things to Do in Myrtle Beach: Franklin G. Burroughs-Simeon B. Chapin Art Museum 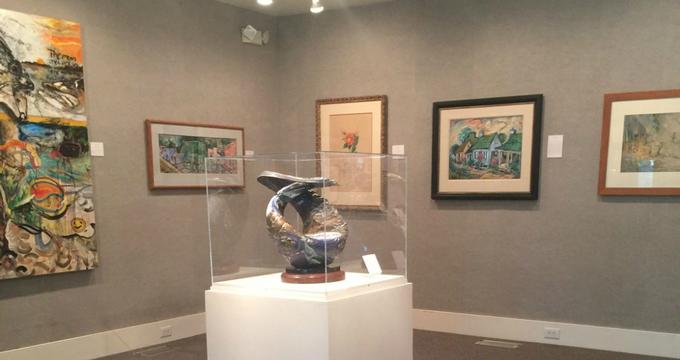 Located in Myrtle Beach, South Carolina, the Franklin G. Burroughs-Simeon B. Chapin Art Museum is one of the most comprehensive fine arts museums in the Carolinas, offering a variety of permanent and temporary art exhibits along with public educational and creative programming. The historic Springmaid Villa, originally located in Myrtle Beach’s Cabana Section neighborhood, serves as the home of the Burroughs-Chapin Art Museum.

It was constructed in 1924 by textile magnate Eugene Cannon and subsequently purchased by Springs Industries owner Elliot White Springs as a family and executive retreat facility. After the Villa faced the prospect of demolition for area development in 1975, a citizen campaign was started by Gaye Sanders Fisher, the president of the Waccamaw Arts and Crafts Guild, to save the historic property. As part of preservation efforts, the Villa was relocated eight miles south of its original location, utilizing teams of City of Myrtle Beach employees and Guild members to transport it to an undeveloped property donated by Harry Charles and the Myrtle Beach Farms Company. The Springmaid Villa Art Museum Corporation nonprofit organization was created to oversee the development of an art museum at the relocated facility, operated by a board of trustees consisting of Myrtle Beach business leaders, artists, arts patrons, and private citizens. After a decade of fundraising efforts, the Art Museum was opened to the public in 1997, named in honor of the founders of the Myrtle Beach Farms Company.

Today, the Burroughs-Chapin Art Museum is operated as a nonprofit organization, striving to cultivate one of the finest and most comprehensive collections of fine visual arts in the American Southeast. In 2003, after the Villa was purchased from the city by the Springmaid Villa Art Museum Corporation, all museum admission was made free to the public. The museum is one of the premiere visual arts attractions in the Carolinas and was the 2013 recipient of South Carolina’s Elizabeth O’Neill Verner Award, the state’s official Governor’s Award for the Arts, which is presented to outstanding innovative area arts organizations.

The museum’s permanent collections are divided into four distinct sub-collections, showcasing a variety of historical fine arts pieces with an emphasis on works created in the American Southeast. The basis of the museum’s collections was formed by an original gift of 49 works donated by the Waccamaw Arts and Crafts Guild, which has grown to become the permanent Waccamaw Arts and Crafts Guild Collection, showcasing the works of noted regional artists. Local art is also the focus of the Barbara Burgess and John Dinkelspiel Collection of Southern Art, which features more than 50 works in a variety of visual media, including 21 pieces by Charleston painter Jonathan Green. The Bishop Collection of Antique Maps and Historical Prints, donated in 1999, showcases a collection of maps dating back to the early 17th century, paired with complementary selections of contemporary historical prints. The Collection of Gifts and Purchases also showcases works donated throughout the museum’s history by local donors and patrons, including pieces featured in former temporary exhibitions.

11 art galleries are featured throughout the museum, with many reserved for rotating temporary special exhibits, which showcase the works of multidisciplinary regional and national artists. Past temporary exhibitions have featured the works of nationally-noted artists such as Frank Lloyd Wright, Ansel Adams, and Normal Rockwell, along with noted regional artists such as Brian Rutenberg and Jonathan Green. Exhibitions are geared toward all-ages visitors and frequently feature family themes, including previous exhibits highlighting famous literary characters such as Tom Sawyer and Babar and themes such as the golden age of animation.

Guided and self-guided tours are offered for small groups and organizations, including curriculum-incorporated tours for elementary and secondary school groups. A workshop field trip opportunity is also offered for student groups, including a museum tour and a 90-minute art workshop centered on themes related to current rotating exhibits. A variety of youth educational programming is offered throughout the year, including a KidsArt program that offers parent-child workshops and Saturday Adventures events, a quarterly Teen Arts Program, and an annual summer camp for students ages 5-12. In-school outreach programming is offered through an ArtTrunks program, which brings museum collections directly into the classroom, and community field trip events bring students into the museum during summer vacation months. An annual Horry-Georgetown County High Schools Juried Exhibition, held since 2000, invites area high school students to submit works of art for consideration for display as part of museum exhibits. A variety of public special events are also offered throughout the year, including exhibition opening receptions, lectures, gallery talks, and Community Family Days events.

More Things to Do in Myrtle Beach SC