Things to Do in Greenville, SC: TD Saturday Market 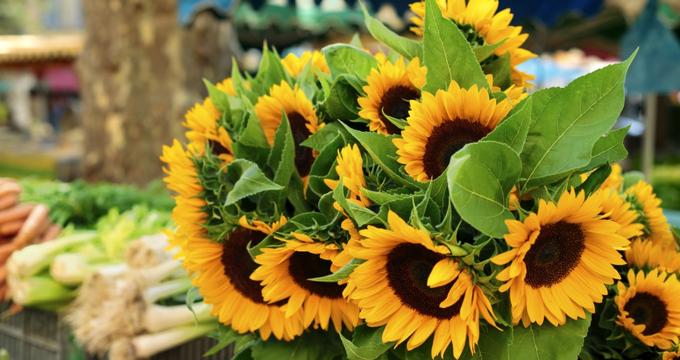 Every Saturday morning from the start of May to the end of October, a bustling farmers market takes over two blocks of Main Street in downtown Greenville, aptly called the TD Saturday Market, when around 75 white tents replace the cars normally waiting at traffic lights or trying to find the best parking spot. Each tent houses a vendor selling the freshest produce of the season, such as ripe strawberries in the beginning of June or burning hot peppers near the end of July, or the highest quality and most original crafts in the area.

Thousands of people visit the TD Saturday Market every week for its locally sourced products. Those selling crafts at the market are highly encouraged to use supplies that are locally sourced, and all food must be produced or grown within 100 miles of Greenville. Most people come for the handcrafted cheese and pastas or the fresh produce, while others make the market a ritual during the summer, meeting friends over breakfast or bringing children to dance along to the music played live by local musicians. Others visit the market for a unique chance to watch a cooking demonstration by a local chef.

In contrast to the Saturday Market's success today, the downtown area of Greenville had more modest beginnings. When the market first began in 2003, downtown Greenville was just starting to flourish after almost 30 years of strategic revitalization, ranging from bookending Main Street with a state-of-the-art park and a major hotel and reducing the street's four lanes to two. The market was first located on a small side street and only included around 20 vendors.

Attendance was rather low throughout the TD Saturday Market's beginning. As word began to spread and the popularity of Main Street as a dining, entertainment, and shopping destination increased, however, the market's attendance began to grow as well. The market became too large for the side street in 2007 and was relocated to its current location on Main Street. Today, over 60 vendors and interesting programs in collaboration with local organizations exist at the market. There is something special about the TD Saturday Market, whether it's the look back at how far the market and Greenville's downtown district have come, the gathering of visitors and locals alike, or the summer sunlight streaming through the trees.

Also present at the TD Saturday Market is the new Youth Booth, specifically set up to help out young entrepreneurs. Local youth are invited to apply to be a Youth Booth participant for one Saturday during the market season. At the booth, children have the opportunity to showcase their skills and potentially sell their work to visitors of the market. Participants are given one day to try their hand at being a vendor for a small fee, which includes a 10-by-10-foot tent space along with a 6-foot table. Youth Booth participants aren't allowed to sell food items, so it's typically only crafts, and participants are listed on the market's website once scheduled.

More Things to Do in Greenville

25 Best Things to Do on Hilton Head Island, South Carolina

20 Best Things to Do on Pawley's Island, SC