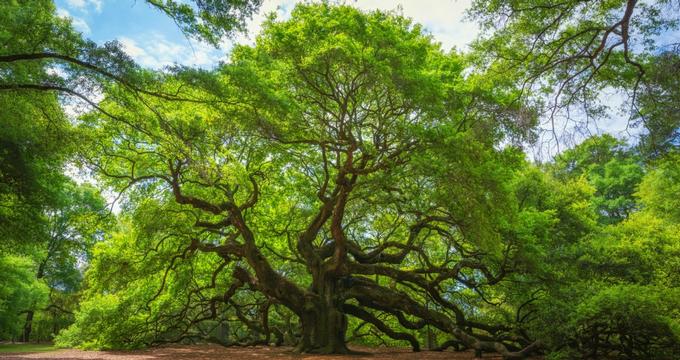 Believed to be around 400 years old, this southern live oak makes its home in Angel Oak Park, Johns Island, South Carolina. It stands at 66.5 feet tall and measures 28 feet in circumference. The shade produced by the tree casts a shadow over 17,200 square feet and the longest branch from trunk to tip is 187 feet.

Thought to be one of the oldest living things in the country, its namesakes were Martha Waight Tucker Angel and her husband Justus Angel, the original owners of the estate. Local folklore spins a slightly more interesting origin however, linking the tree to spooky sightings of former slaves who have reappeared as angels or ghosts on the grounds nearby.

The tree was severely damaged in 1989 by Hurricane Hugo. It has since recovered and visitors will be pleased to hear it was not damaged by Hurricane Matthew in 2016 . It was the 210th tree to be registered with the Live Oak Society and is afforded some protection due to its age and status. In 2012 there were plans for an apartment complex to be built a mere 160 yards from the Angel Oak, however the construction plan however was challenged and taken to court. The defense was made by the Coastal Conservation League as well as by a nonprofit group known as Save the Angel Oak. Their concerns focused on the negative impact the construction would have on the available nutrients present in the groundwater. In December 2013, the two groups celebrated a victory and the construction plans have been scrapped.

Trees with as long a life and as a rich history as this one are a stark reminder of the brief and beautiful time that we have on this Earth. They remind us that there is something much larger and more lasting; they force you to sit up and consider the legacy that we are going to leave. It’s so important to see humans and organizations coming to the defense of trees such as this one, because it’s clear that we still have much to learn; this is the lesson that can be found amongst the shade of this tree’s beautiful branches.

The tree has built itself a certain amount of celebrity status and remains one of South Carolina’s top tourist attractions. The tree is so old and has grown so large that it cannot even support its own weight, so visitors may see a few instances where the branches are being assisted with metal wiring or support beams. Owing to the gargantuan nature of this tree, budding photographers may actually struggle to get the whole entity in one shot, especially on a busy day when there can be up to 50 tourists between you and the tree.

Located down the end of an easily accessed dirt road, parking and basic facilities are available at the site, as are picnic tables and a gift shop. Otherwise, the Angel Oak and its surroundings are kept simple and left to nature.

Best Things to Do in Charleston, SC: Charleston Music Hall