Things to Do in Providence: The Providence Performing Arts Center 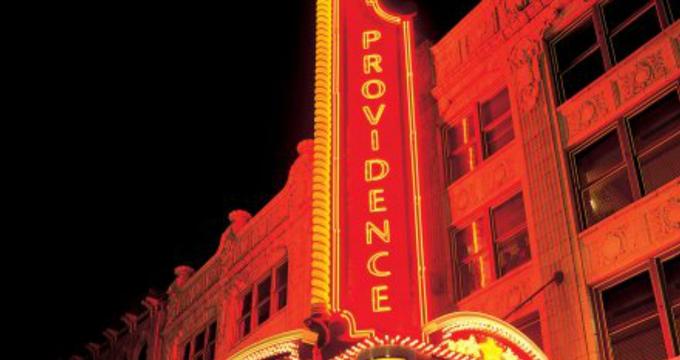 The Providence Performing Arts Center, known as the PPCA, is a theater and multi-use space situated in Providence, Rhode Island. Dating back to 1928, the space is the second-largest theater of its type in the US. The rise of television coupled with various hurricanes meant that the theater suffered greatly from neglect and the business floundered until the 1970s. In 1978 it was sold to local businessmen, who transformed the interior, returning it to its original 1920s grandeur. Today, the interior is awash with gold, murals, marble columns, and grand chandeliers in the art deco style. Now a performing arts center, the PPAC hosts concerts, touring Broadway shows, plays, and films with an over 3,000-seat capacity. In 1977 the Providence Performing Arts Center was added to the National Register of Historic Places.

Within the theater room itself is a vast dome with intricately painted and lit walls, while 3,100 gold chairs with carved sides can be found in rows within the theater. The layout consists of the first and second balconies, the central mezzanine, and the orchestra spaces. Spaces for wheelchair users are located within the first balcony and orchestra areas, while an elevator situated on the first floor opposite the Grand Lobby allows theatergoers easy access the mezzanine and first and second balconies. The Grand Lobby is decorated in lavish colors and design, in a style matching the rest of the theater. Its colorful and opulent walls lead to the Lobby Lounge and the Grand Lobby stairs.

Further spaces within the PPAC are the arcade, the boardroom, downstairs auditorium, backstage, Marquee Room, and President’s Club. The President’s Club is a members-only area that can be rented for private functions. President’s Club members can enjoy free concierge services and private restrooms, amongst other benefits. There are two sets of restrooms, one on the first floor and another on the second. The first floor also has a water fountain and telephone available for use by all patrons. For private functions, there are three large reception rooms accommodating 150 guests with a full bar, a concierge service, and catering available for use. Throughout the Providence Performing Arts Center are ushers who are ready to assist with any questions, and the house manager’s desk is located in the Grand Lobby. Within the lobby is also a Citizens Bank ATM for withdrawing cash, and patrons wishing to buy food and drink from the concessions stands can do so on both the upper and lower levels of the lobby. On offer are sweet and savory candies, popcorn, and soft and alcoholic drinks.

The PPAC has a resident Wurlitzer pipe organ, which is often played throughout specific events by local organists for the community. These hour-long concerts are free to attend and open to the public. Donations received from such performances go to the Annual Fund, which funds the maintenance and ongoing upkeep for the organ, while a fee is paid to the organists and complimentary drinks are offered to those who attend. Such events are part of the theater’s outreach program. A further program is the Bank of America Arts Showcase, which combines artists, students, and teachers within this community outreach arts program. Open to middle schoolers, thousands of students attend theatre, music, or dance performances during school hours. The performing artists are local to New England and are carefully chosen regarding the educational value of their performances, their cultural diversity, and how well they are received by audiences. Study guidelines are given to teachers to aid in developing curriculum activities, and students and teachers are asked to hand in a report card to provide feedback after each performance.

A further outreach program is the ARTS Scholarship program, wherein a certain number of Rhode Island students aged 11-14 receive a scholarship amounting to $500 so that they can attend local summer arts education programs to expand their horizons within areas that interest them. Another example is the Books to Broadway program, which is an educational partnership created to enlighten students about Broadway through attending performances at their school and a “meet and greet” with the performers from the cast of that show. The cast members offer advice on becoming involved in theater and tours as well as how they became involved themselves.

More Things to Do in Providence

Things to Do in Newport, Rhode Island: Redwood Library and Athenaeum

Things to Do in Newport, Rhode Island: Newport Art Museum