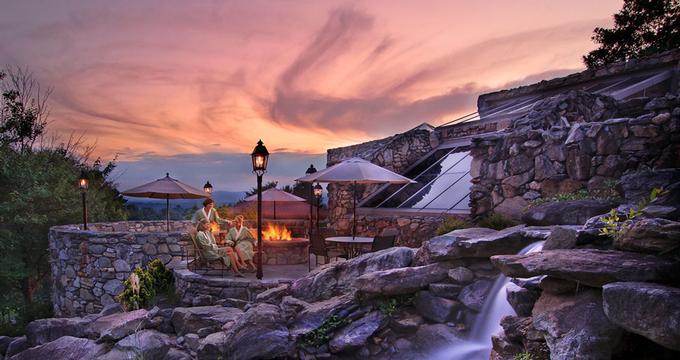 The Omni Grove Park Inn, located in the mountains of Asheville, North Carolina, is the perfect spot for couples, families, and those looking for a blend of relaxation, spa services, and sporting activities.

This historic inn has been in operation for over one hundred years, and it recently underwent a large-scale renovation. There are five hundred and thirteen guest rooms, offering several different choices in accommodations. 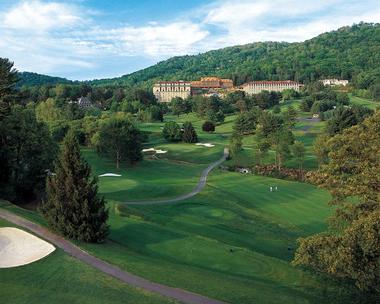 The rooms in the Main Inn feature Roycroft Arts & Crafts furnishings, while the décor of the Sammons and Vanderbilt wings is more modern. The Stickley Suite includes furnishings by the L.&J.G. Stickle Furnishing Co., the company responsible for furnishing a large part of the Main Inn in 1913. Views can include the spa gardens, golf course, courtyard, or the Blue Ridge Mountains.

The Mountain View Rooms overlook the inn’s golf course with views of the Asheville Skyline and the Blue Ridge Mountains. The Premium Mountain View Rooms of the Vanderbilt Wing boast a modern take on traditional décor and sport views of the spa’s gardens and the inn’s landscaping, which utilizes plants native to the region. The Executive Junior Suites are amply sized with sitting rooms and balconies overlooking the spa’s gardens.

The Club Floor Rooms are for adults aged twenty-one years and over only. These rooms include effervescent baths and roomy hydro-showers, as well as a view of the spa’s gardens. Room amenities include Rivolta Carmignani bed linens, personal concierge service, access to the spa’s water features, and evening cocktail receptions in the Club Floor Lounge, as well as valet or garage parking. The Premium Club Floor Rooms boast some of the finest views the inn has to offer, as well as relaxing sitting areas. 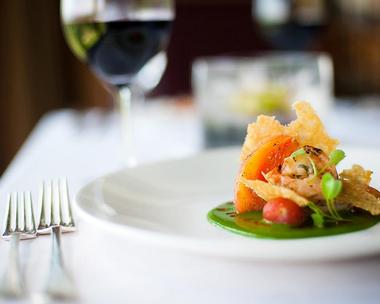 Blue Ridge is the inn’s farm-to-table buffet style eatery featuring a seafood buffet on Fridays, a prime rib buffet on Saturdays, and a brunch buffet on Sundays.

The Spa Café features fresh pressed juices, smoothies, salads, light sandwiches, and wraps. The Market Place is the place to grab a quick, house made pastry, pizza, coffee, or sandwich.

In addition to Edison, Craft Ales + Kitchen, the inn boasts four drinking establishments. The Great Hall Bar exudes old world charm and features live entertainment and music each night. The Presidents Lounge offers a wide selection of wines by the glass, light fare, and signature cocktails such as the Knickbocker with Bacardi Rum, fresh lime juice, and Grand Marnier Raspberry Peach Liqueur. Elaine’s Dueling Piano Bar features lively entertainment and a bevy of signature drinks such as the Money on My Mind, a blend of Tanqueray Gin, orange and grapefruit juices, the Rocky Top with Troy and Sons Moonshine, sour mix, and Grenadine, and the Sharp Dressed Gentleman, which consists of Gentleman Jack Whiskey, Vermouth, and orange bitters.

3.The Spa at the Omni Grove Park Inn 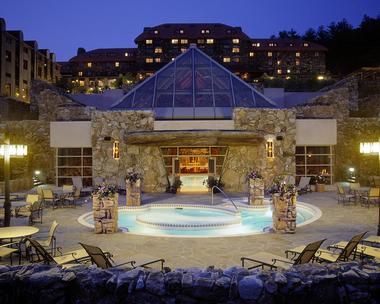 The Spa at the Omni Grove Park Inn offers hot stone, aromatherapy, maternity, Swedish, and couples massages, as well as signature services such as the Head in the Clouds Massage, which focuses on the head, scalp, shoulders, neck, arms, and back, and the Mountain River Walk, which uses reflexology to improve circulation and ease tension.

Body treatments include the Waterfall Body Experience, which blends a revitalizing full body exfoliation, a Vichy waterfall, and a calming massage, the Mother-To-Be or New Mother Wrap, which uses essential oils that are safe for mother and child to nourish skin and diminish stretch marks in conjunction with exfoliation, wrap, and massage, and the De-Stress Body Treatment, which uses a signature blend of essential oils in conjunction with exfoliation, wrap, and massage to relieve muscle tension and soothe the mind.

Facials include the Reversive, which reenergizes the skin’s anti-aging abilities and diminishes wrinkles and fine lines, the Ultimate Facial, which blends synergistic deep sea elements with the spa’s signature therapeutic treatments to smooth, firm, and rejuvenate skin and replenish the body’s energy, and the Sanctuary of the Senses Facial, which uses cleansing, exfoliation, and a three-layer enzyme mask to replenish the skin’s elasticity and even skin tone.

The spa also invites guests to use the facility’s mineral pools, with soothing underwater music, waterfall pools, contrast pools, lap pools, an inhalation room, a sauna, and a eucalyptus scented steam room, as well as an outdoor fireplace and whirlpool. 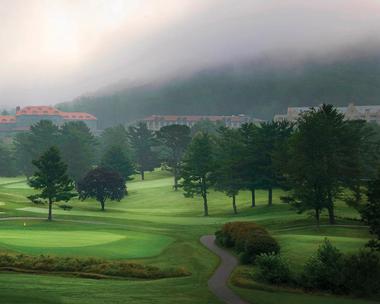 The resort boasts an 18-hole golf course that has been played by the likes of Jack Nicklaus, Bobby Jones, and President Obama, and it features tree lined fairways and bent greens with panoramic views of the Blue Ridge Mountains. Private lessons are available.

The Omni Grove Park Inn also features numerous sporting activities, including tennis, racquetball, mountain biking, hiking, climbing, zip lining, fly fishing, whitewater river rafting, kayaking, canoeing, and historical tours of the grounds. In addition, the inn offers Wild Food Adventures, where a knowledgeable guide teaches participants of all ages and skill levels how to forage for food, including how to gather and preserve wild mushrooms. Upon returning from the Wild Food Adventures, participants may turn in their foraged food, which is then made into a special appetizer by the chef from Vue 1913.

The Fitness Center offers classes in yoga, Pilates, and body sculpting, and it is also equipped with elliptical trainers, treadmills, and free weights.

The Children’s Program/Kids Night Out includes activities such as arts and crafts, group games, sports, and swimming. 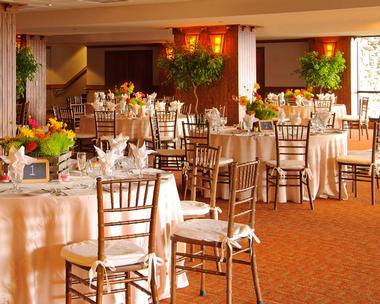 The staff can with assist with wedding preparations, including the choice of a wedding planner and vendors. In-house catering is available (including a fruit or herb-infused water station), as well as floral and audiovisual services within the resort. The inn can also provide mobile dance floors for the wedding reception.

Wedding packages are available for events with fifty or more guests and include bar services, cake design, and butler services.

6.Things to Do Nearby 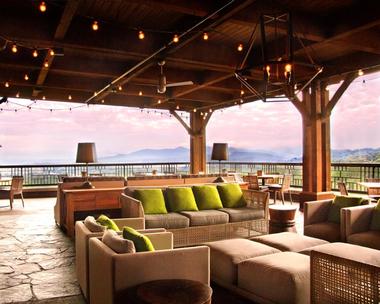 Nearby attractions include the North Carolina Arboretum, which features sixty-five acres of diverse, cultivated gardens, including a renowned bonsai collection, a stream garden, a forest meadow, The National Native Azalea Collection, a holly garden, and the Heritage Garden, which features plants associated with South Appalachian culture. Some of these plants include medicinal herbs, plants used in organic dyes, and plants associated with handcrafted products such as paper, baskets, and brooms. Current exhibitions include the Fine Art and the Colors of Nature Quilt Show, which showcases the work of fiber artists who have taken their inspiration from the plants, animals, and natural surroundings of North Carolina.

Grovewood Gallery brings art, crafts, and history together in one location. In addition to viewing the art and crafts at the gallery, guests can also tour working artist studios representing diverse mediums on select dates. The property also houses the Antique Car Museum, which houses rare and vintage automobiles, as well as horse-drawn carriages and an antique fire engine.

The Biltmore Estate is a two hundred and fifty room chateau constructed for the Vanderbilt family in 1895. Guests can enjoy self-guided tours through the estate, which includes exhibits on period clothing, furniture, and accessories, a library with a ten thousand volume collection of books, and artwork, including original pieces by Pierre-Auguste Renoir and John Singer Sargent. Guests can also tour the gardens designed by famed landscape architect Frederick Law Olmstead. Special exhibitions at the estate include Fashionable Romance: Wedding Gowns in Film, a retrospective of wedding dresses used in motion pictures over the course of decades.

Back to: Honeymoon Weekend Getaways and Things to Do in Asheville, North Carolina.

Romantic Places to Stay on Nantucket: The Nantucket Hotel + Resort