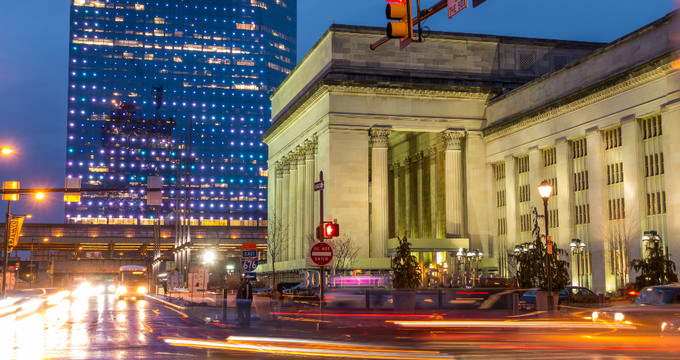 Known as the City of Brotherly Love, Philadelphia is one of the oldest and most historically significant cities in the United States. It was founded back in 1682 by an English Quaker named William Penn and is the biggest city in the Commonwealth of Pennsylvania, home to over 1.5 million people. A hugely historical city, Philadelphia played a major role in many key events throughout the past like the American Revolution and the signing of the Declaration of Independence.

The city is therefore home to many key historical sites and monuments like the Liberty Bell, Ben Franklin Bridge, Philadelphia City Hall, Independence Hall, College Hall, the Port of Philadelphia, and more. The city was the birthplace of the United States Marine Corps and also the first city in the United States to have many key landmarks like a zoo, library, hospital, and business school. It has dozens of National Historic Landmarks and even a UNESCO World Heritage Site, being designated a World Heritage City in 2015.

Important Information About The Philadelphia Trolleys

The Philadelphia trolley network dates back a long way, with trolleys first being used in the city in the late 19th century. Several different trolley routes have operated around Philadelphia over the years, with six of them still remaining. All of these routes, aside from Route 15, end at either 13th Street, 15th Street, or 40th Street, depending on the time of day. From 12.30am to 5am, the services end at 15th Street.

Riding the Philadelphia trolley is very simple. To begin with, you simply need to find one of the many trolley stops around Philadelphia and wait for the trolley to arrive. You can use various online services to keep up to date with the latest live trolley arrivals and timing information.

As the trolley arrives, it should stop and let you on without you needing to alert or signal the driver in any way, but you can raise an arm or wave to be sure that the driver has seen you. Upon climbing aboard the trolley, you can present your pre-purchased ticket or pass or use exact change to purchase a ticket for travel.

There are many different fare options when riding the Philadelphia trolley. A standard fare costs just $2.50, just like on other forms of Philadelphia public transport like the subway and buses. It's important to note that exact change is needed and the operators will not be able to provide change if you haven't got the right amount. Senior citizens can ride the Philadelphia trolley for free upon showing a PA driver license or non-driver ID card.

There are also discounted fares available for university students at Philadelphia or PA universities and colleges, but students will need to see their own school's information pages to learn more. Disabled riders can also travel at a discounted rate of just $1.25 on board the Philadelphia trolley. Children traveling alone need to pay the full amount but those aged 4 and under traveling with an adult can ride for free. Children aged from kindergarten through to 12th grade can ride at discounted rates as well.

If you're staying in Philadelphia for a while and plan on using the Philadelphia trolley network multiple times, it might make more sense and provide better value to you if you purchase a pass, and there are various forms of passes available for riding on the Philadelphia trolley system and other public transit routes around the city. The weekly TransPass, for example, costs $25.50 and offers full travel on the trolley network, as well as buses, subways, and the Norristown High Speed Line.

Monthly TransPass passes can also be purchased for $96. The TrailPass is another option, available in both weekly and monthly formats. There are also one-day passes in both 'Convenience' and 'Independence' formats, offering full daily travel across the trolley system and other public transportation networks around Philadelphia.