Things to Do in Lancaster, Pennsylvania: Rock Ford Plantation 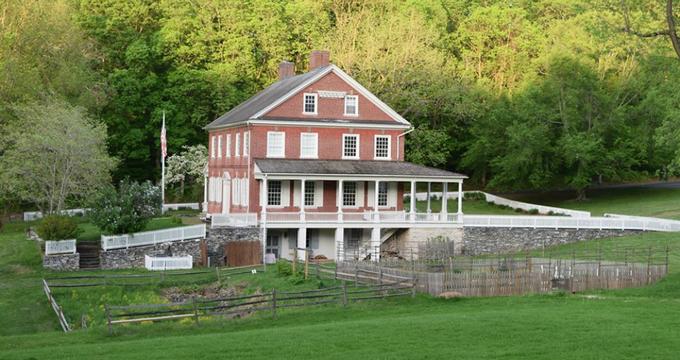 Located in Lancaster, Pennsylvania, the Rock Ford Plantation aims to preserve an important piece of American history while educating visitors about life in 18th century Pennsylvania through the story of General Edward Hand. Visitors can truly experience what life what like during the 18th century while exploring the well-preserved historical Rock Ford Plantation and its many cultural and educational activities.

The Rock Ford Plantation consists of 33 acres of farmland with a red brick mansion that belonged to the American Revolutionary Hero General Edward Hand during the 18th century.

General Hand was born in 1744 in Ireland and proudly served as a surgeon in the Royal Irish Regiment in America, specifically Fort Pitt. After resigning from the service in 1774, he moved to Lancaster to practice medicine, was married and had 8 children. He spent time serving on Congress and eventually died at the Rock Ford Plantation in September 1802.

The mansion itself is on 177-acres of farmland alongside the Conestoga River just South of Lancaster. While the property was owned by the Hand family there were extensive orchids, livestock, and fields filled with crops. The property was sold in 1810 after the death of General Hand and the new tenants made almost no changes to the plantation in 150 years.

Ownership of the property was taken by the government in the 1950’s and for the first time in hundreds of years, the property was facing the danger of demolition. The Lancaster Area Refuse Authority wanted to turn the area into a landfill until the Junior League of Lancaster saved the plantation by establishing the Rock Ford Foundation. Restoration efforts began and the plantation was official opened to visitors in 1964.

The Rock Ford mansion is elegantly decorated and furnished with expensive pieces of decorative art and furnishings from the period. The authentic and well-preserved red rick mansion is a prime example of what refined living in the country was like in the 18th century.

The mansion, the neighboring barn, and the well-maintained surrounding acreage (comprised of more than 170 acres) feel as if visitors have literally been transported back in time.

Stories on the Porch Series: This event will be held throughout the months of July and August and features a volunteer dressed in costume telling stories to children on the mansion’s porch. There will be a fun and interactive activity and light snacks served. Children grades preschool -5th grade are invited to attend.

Rock Ford Lobster Picnic: This annual event will be held on August 10, 2017 from 6 – 10 p.m. and will feature fun and food for the entire family. Dinner will be served, including steak and lobster dishes, and there will be live music and activities. Reservations must be made and ticket prices range from $75 - $100.

Lecture Series: This event, “The Whiskey Boys and the Watermelon Army: Tax Protests on the Pennsylvania Frontier in the Early American Republic”, features Dr. Robyn Lily Davis of Millersville University’s History Department. The lecture will focus on the battle known as the Whiskey insurrection. In 1974, local farmers were protesting the whiskey tax imposed by the government so George Washington led 13,000 troops into battle to surpress the uprising. Dr. Davis will discuss the deeper meaning of this protest and battle on Septermber 28, 2017 at 5 p.m.

Sleepy Hollow: The Legend Comes to Rock Ford: This event features a 45-minute play where the audience will be immersed in the candlelit rooms of the mansion with famous characters from Sleepy Hollow. This event will be held throughout the month of October.

Yuletide Candlelight Tours: This event immerses visitors in the Yuletide festivities, traditions, and customs of 18th century Americans. The event will be held throughout the month of December and features live music, 18th century dancing, and candlelight tours of the mansion.

There are a variety of educational programs available for visitors of all ages year-round at the Rock Ford Plantation. Student group tours are some of the most popular educational activities and will include personalized tours, hands-on activities, and a picnic. Children can explore the historic mansion, try on period clothing, and explore the surrounding plantation. There are many resources available to teachers and parents as well.

Specialized lecture series, educational programs, and cultural and historic events are hosted often at the Plantation and are sure to delight visitors of all ages.

Back to: Things to Do in Lancaster, Pennsylvania

Things to Do in Pittsburgh, Pennsylvania: The Commoner

Best Things to Do in Harrisburg, Pennsylvania