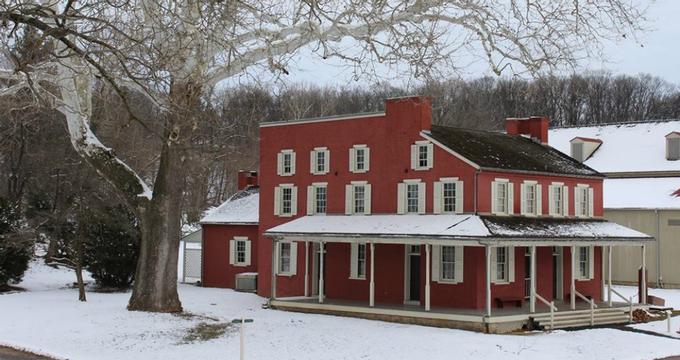 Located in Lancaster, PA, the Landis Valley Village & Farm Museum is a 100 acre historical landmark that preserves and promotes the history, culture, and significance of Pennsylvania Germans.

The Landis Valley Museum was founded by George and Henry Landis, whose heritage is nestled within Pennsylvania Germans. The Landis’ ancestors traveled to Lancaster in the early 1700s and had left many artifacts. Together, George and Henry collected these artifacts and created a private collection with more than 75,000 artifacts. During the 1920s, the Landis brothers officially opened the Landis Valley Museum.

In 1953, the Commonwealth of Pennsylvania acquired the Museum. Since then, the original small Museum has grown to incorporating a combination of historic buildings and structures. Today, the Museum operates alongside demonstrations and replications that truly represent the lifestyle of Pennsylvania Germans throughout history.

The Landis Valley Village & Farm Museum has an array of attractions spread out across their 100 acres, including:

Landis Collection Gallery is a facility dedicated to showcasing a variety of rotating exhibits, which display a combination of decorative arts.

Issac Landis House is the original Landis house, which was built during the 1870s. This house features a variety of activity rooms for educational purposes, as well as rooms that are open to the public for special events.

Maple Grove Schoolhouse was built in 1890 and used as an Amish school. The furniture within this schoolhouse depicts the style and nature of what the schoolhouse looked like in 1890 to 1900.

Landis Valley house Hotel was built in 1856 by Jacob Landis Jr. This hotel features furniture to replicate what it looked like during the early 1900s.

Farm Machinery and Tool Barn features a variety of tools and farm machinery that was used throughout the Colonial era and up to the 20th century.

Blacksmith Shop was transported from Gettysburg, and features a variety of objects that would be found within a blacksmith shop from 1880 to 1900.

The Brick Farmstead was built in 1830 and is the original farmhouse that was used by Jacob and Elizabeth Landis. This farmstead represents the lifestyles and daily tasks that the Landis’ did, as well as what early farmsteads looked like.

Log Farm is a recreation of structures and gardens that could be found within an original farmstead of a Pennsylvania German during the 1750s. Featured animals include oxen, Tunis sheep, and lineback cattle.

Landis Brothers’ House and Stable is one of the featured attractions. This house was the home of George D. and Henry K. Landis, who were the founders of the Landis Valley Village & Farm Museum. The furniture within the house represents what the Victorian house looked like during the early 1900s.

Visitor Center is the premier facility within the Landis Valley Village & Farm Museum. Inside the Visitor Center, visitors can access a variety of information, as well as view an orientation video and tour the exhibit gallery.

The Landis Valley Village & Farm Museum offers a variety of educational opportunities for everyone. Children are welcome to participate in a variety of classes and workshops, as well as field trips with their schools. As for adults, they can take workshops or classes during the winter. Each educational opportunity at the Landis Valley Village & Farm Museum is intended to promote the culture and significance of Pennsylvania Germans. Children and adults can learn trades, crafts, history and culture through the programs offered at the museum. There are also opportunities for scout groups.

Back to: Things to Do in Lancaster

Things to Do in Lancaster, Pennsylvania: Lancaster Science Factory

Things to Do in Pennsylvania: Philadelphia Museum of Art

Best Things to Do in Harrisburg, Pennsylvania