Newport, OR Things to Do: Newport Historic Bayfront 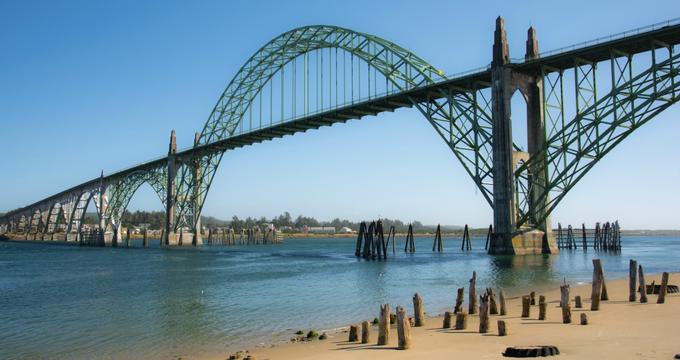 © Courtesy of The Speedy Butterfly - Fotolia.com

Newport is a small coastal town in Oregon with a historic bayfront, which is now home to several shops, restaurants and attractions. Visitors can stroll through the piers and boardwalks, and view the bay and historical landmarks. The Yaquina Bay Bridge is the most recognizable and iconic in the area.

The art deco structure was built in 1936 by Oregon’s Conde McCullogh, who designed several of Oregon’s coastal bridges along Highway 101, and the bridge is considered the masterpiece of his career. Two historic lighthouses, Yaquina Bay and Yaquina Head no longer serve as navigational guides, but are open to visitors as museums. Yaquina Bay lighthouse was built in 1871 and is believed to be Newport’s oldest structure. Yaquina Head lighthouse was completed in 1873, stands tallest at 93 feet, and is home to a historic Fresnel lens, which celebrates its 150th birthday in 2018.

Sea lion watching is a favorite activity. Visitors can hear the sea lions barking before they can see them, the animals may be viewed from several points along the pier in the Historic Bayfront district. Known as the Dungeness Crab Capital of the World, Newport is home to the state’s most prolific commercial crabbers, and visitors can do their own crabbing from the docks of Yaquina Bay or by boat during the harvesting season, which takes place between September and January each year. Visitors can purchase fresh caught fish directly from the fishermen at the docks on Piers 3, 5 and 7, or from the South Beach Marina.

Downtown Newport’s Deco District begins at the foot of the Yaquina Bay Bridge. Designated in 2007, the site is home to several restored 1930’s era art deco buildings. The Deco buildings are home to the famous Pig 'N Pancake Restaurant, the locally owned Diamonds by the Sea jewelry shop, Go Fly a Kite, a family-owned kite shop and The Olde Telephone Company, which sells antique phones, signage and tin toys.

South Beach is home to the Edge Art Gallery, where guests can watch glassworks being made on site at the glass shop, or make something themselves by enrolling in a workshop. Pirates Plunder Antiques and Collectibles is a popular antique fair, which hosts several different vendors. South Beach is home to a marina where visitors may purchase fresh fish or begin a boat tour of the bay.

More than 80 restaurants in the historic Newport area range from small cafes to fine dining. The popular Oregon brewery, Rogue Brewing opened in Newport in 1989 and today offers the original Brewery, as well as the Rogue House of Spirits, located directly across from the distillery. Mo’s Restaurant is a favorite, serving meals on the Historic Bayfront for over 70 years. The family operated restaurant has been open since 1946, and is famous for their clam chowder, Oregon seafood, and homemade cobblers and pies. Mo’s Annex is a smaller restaurant across the street from the original, overlooking the bay.

History: Newport’s origins began in the mid-1800’s when Oyster beds were discovered in the Yaquina Bay and settlers discovered the great profit in shipping the Oysters throughout the west coast. Newport’s Bayfront was incorporated in 1882, at which point large numbers of Europeans were fishing and living along the shore. Fish processing plants sprung up in the early 1900’s, making fishing the number one industry in the area, until the 1930’s when the Yaquina Bay Bridge was complete and tourism began to take over. Today, the area is still popular as a crabbing and fishing destination, along with shopping, art galleries, restaurants and nightlife.

More Things to Do in Newport, OR

Newport, OR Things to Do: Pacific Maritime Heritage Center