Things to Do in Toledo, Ohio: National Museum of the Great Lakes 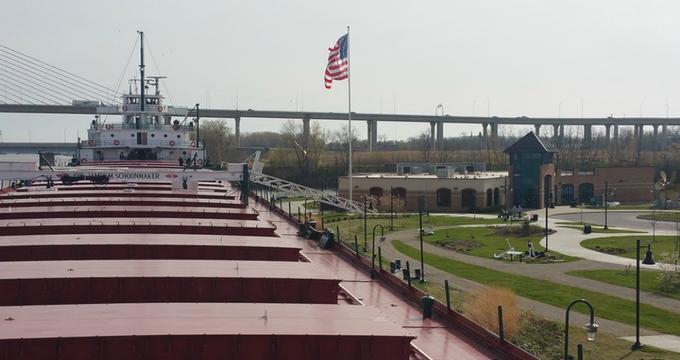 © National Museum of the Great Lakes

Based in the Toledo Maritime Center on the banks of the Maumee River in Ohio, the National Museum of the Great Lakes is a museum dedicated to the fascinating history of the treasured Great Lakes. Operated by the Great Lakes Historical Society, the Museum is set within a beautifully landscaped 3.5-acre maritime-themed park and features over 40 hands-on exhibits made up of more than 250 original Great Lakes artifacts, objects, and photographs. The Museum is also home to the lake freighter, the S.S. Col. James M. Schoonmaker Museum Ship, which is available for touring and offers modern meeting spaces for groups. Signature items in the collection include a recovered life raft from the wreck of the Edmund Fitzgerald, and the first gold ‘life-saving medal presented by the U.S. Government, and interactive activities include directing a computer-simulated submersible through the wreckage of a lost freighter and operating a bilge pump.

The National Museum of the Great Lakes (NMGL) was founded by the Great Lakes Historical Society, who operated a small museum in Vermillion, Ohio. When the Society moved operations and opened a larger museum in Toledo, they combined their museum functions with the display of a historic lake freighter, the S.S. Col. James M. Schoonmaker to become the National Museum of the Great Lakes. Built in the Second Industrial Revolution, the S.S. Col. James M. Schoonmaker is moored next to the museum and open to the public during the warm months. The NMGL's riverfront museum features exhibits and displays, including model ships, which take visitors through the Lakes' rich 350-year history of navigation, along with navigational memorabilia such as machinery, rigging, and chinaware used by passenger liners of old.

The National Museum of the Great Lakes is set in a building on the riverfront of the Maumee River that has been designed to celebrate both the natural and the human-made heritage of the Great Lakes. The museum features a variety of exhibits and displays, including model ships, which take visitors through the Lakes' rich 350-year history of navigation. Visitors can also explore a plethora of navigational memorabilia such as the machinery and rigging on river and lake-going vessels, and the cutlery and chinaware used by old steam packets and passenger liners.

Enhancing the artifacts are interactive exhibits, and visitors can enjoy several marine-based activities such as manually unloading coal from a rail car with a mini coal dumper, trying on an early-American voyageur explorer’s 85-pound backpack, or directing a computer-simulated submersible through the wreckage of a lost freighter with a joystick. Other hands-on activities include operating a bilge pump and a magnetometer to find buried relics from the HMS General Hunter, which was unearthed on a beach in Southampton after being shipwrecked in 1816.

The National Museum of the Great Lakes is located on the banks of the Maumee River on Front Street in Toledo and is open to the public Tuesday through Saturday from 10:00 am to 5:00 pm and Sunday from noon to 5:00 pm.

Toledo offers a variety of things to see and do for the whole family, ranging from arts and culture to shopping, dining out, and enjoying outdoor and recreational activities. The Toledo Botanical Garden is a 60-acre garden open to the public and free of charge and not only offers a variety of beautiful gardens in which to relax, but also hosts an array of events like the Crosby Festival of Arts, Heralding the Holidays, and the Jazz in the Park Garden Concert Series.

The Toledo Museum of Art boasts a collection of over 30,000 works and is famous for its collection of 19th and 20th century glass art, and the Toledo Zoo is home to a fantastic array of animals and birds, as well as a 178,000-gallon aquarium with more than 3,000 aquatic animals.

More Things to Do in Toledo, Ohio