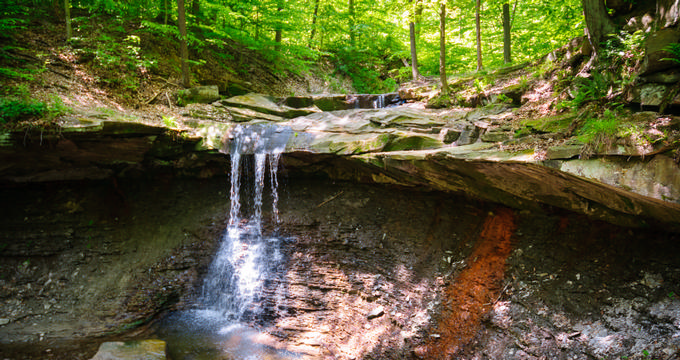 The backbone of the Cuyahoga Valley is formed by the Cuyahoga River, which winds through the park and contributes to the varying habitats of wetlands, oil fields and forests. The park is home to over 900 species of plants, and a variety of amphibians, reptiles, mammals, birds and aquatic macroinvertebrates. Birds at the park include peregrine falcons, bald eagles, great blue herons, and seven bat species. Wildlife includes beavers and river otters as well as minks, red and gray foxes, coyotes and white tail deer.

Biking and hiking are among the most popular activities in the park, especially along the Ohio & Erie Towpath Trail, one of the park’s major trails, which passes by several natural and historic attractions. Following the historic Ohio & Erie Canal, the wheelchair and stroller accessible path passes by many of the historic canal locks. Historic stops along the path include the Canal Exploration Center, the park’s newest attraction. The historic Canal Center was once a tavern, general store, then residence and now hosts exhibits on the history of the Canal.

The Boston Store Visitor Center is also a historic building, and serves as the park’s primary information center. The Hunt House is a historic home that now offers child-friendly nature exhibits, restrooms and information. In the spring, summer and fall, visitors may ride the Towpath Trail one way by bicycle, and hitch a train ride back to their starting point via the Cuyahoga Valley Scenic Railroad. The Scenic Railroad operates along a 26-mile north-south track and stops at three different locations throughout the park. A roundtrip ride along the full track takes approximately 3.5 hours. During the winter, the Towpath trail is a popular cross-country skiing trail.

A 22-mile stretch of the Cuyahoga River is the park’s primary waterway. The river is a popular destination for fishing, canoeing and kayaking. Visitors should be advised that some stretches of the river are swift moving, and some areas require portage due to dams or other obstacles. The Park does not maintain the river for paddling, and does not remove submerged objects that may make passage difficult. Motorboats or any outboard motors are not allowed on the river. Motorboats, canoes and kayaks are allowed on all of the park’s ponds. Fishing is allowed on all the park’s rivers and ponds, and while catch and release is highly encouraged, it is not required.

Additional historic structures throughout the park include two facilities available for event rental, the Happy Days Lodge, and the Howe Meadow Barn. The Stanford House is a historic farmhouse built in the 1830’s, which became the park’s first lodging option in 2011. The Inn at Brandywine Falls is a more recent lodging option, and operates out of a luxuriously renovated 1848 Greek revival farmhouse.

History: Visitors began recreating in the area as early as the 1880’s with access provided by the train, and in 1910 the state government began intentionally establishing parks districts. In 1974 the area was designated a National Recreation Area to prevent urban sprawl from overtaking the many district parks. In 2000, the area was reclassified as a National Park.

The park’s Scenic Railroad began as the Valley Railway in 1880, transporting coal from the Tuscarawas River Valley to the cities of Ohio, while also providing leisure excursions for passengers. Having faded from popularity in the early 20th century as automobiles became the preferred method of travel, the train was revived in 1972 as the Cuyahoga Valley Scenic Railroad. The private sector non-profit organization operates in partnership with the National Park.

Ongoing Programs and Education: Events abound at the Cuyahoga Valley National Park and include guided hikes and bicycle rides, yoga and tai chi in the fields, and a fitness series. An art program hosts indoor and outdoor art exhibits throughout the park and visitor centers. A concert series invites the Cleveland Orchestra and other guests to perform outdoors during the summer months. Lock demonstrations and a guided exploration of Beaver Marsh take place along the water. Programming aboard the scenic train includes Murder Mystery Dinners and a “Canvas and Wine” painting class.

More Places to Visit in Ohio